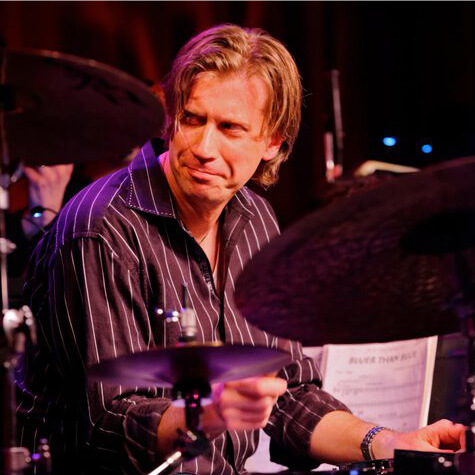 Who Is Tommy Igoe?

Tommy Igoe was born to a very musical family. His father, Sonny Igoe, had been making a name for himself as an educator and drummer since the early be-bop era, playing with guys like Benny Goodman and Woody Herman. Knowing the shortcomings that came from working in the music business, Sonny Igoe tried steering Tommy Igoe in a different direction. However, growing around music and having a father as a drummer quickly shaped little Tommy Igoe’s likings. Before he could even walk, Tommy Igoe was already using knitting needles to drum on everything around him.

Tommy Igoe began drumming when he was a 2-year-old toddler. Tommy Igoe got his first drum set at the age of 3. It was a black Slingerland drum set that Sonny Igoe himself converted into a junior drum set. So it could fit Tommy Igoe’s small stature, Sonny Igoe used the 16 inch floor tom as a bass drum and got some mini stands to go along with the set. Although it was perfect fit for him, Tommy Igoe refused to play on it – he’d rather play on the “real” thing.

Tommy Igoe’s exposure to the music and drumming of the marching parades his parents took him to see, played a huge role in his love for drumming and for the art of rudimental drumming. For the following years, Sonny Igoe would take Tommy Igoe through various books on rudimental drumming that further nurtured his appreciation for military-inspired snare work.

From his early days into his early teenage years Tommy Igoe was taught by his father. During that time, Tommy Igoe took time to study classical and jazz piano as well. At the age of 15 Tommy Igoe began working on his drumming with two great and influential teachers: Darryl Bott, a band director from New Jersey, and Dennis DeLucia, a Drum Corps legend.

“(…) They showed me lots of important musical things. But mostly, they showed me by example that it’s okay to care about this thing called music. I mean, it’s really okay to throw yourself in as far and as deep as you can. As a matter of fact, if you aren’t going to do it all the way, don’t do it at all. They were passionate about their art, and their commitment to education. They gave me that same passion and for that I am truly grateful.” – in “Tommy Igoe: 5 Minutes”, Hudson Music’s website.

Tommy Igoe first heard of Dennis DeLucia through the work he had developed in the mid-1970s with a junior drum corps from Hawthorne, New Jersey called the Hawthorne Muchachos – Tommy Igoe’s favorite drum corps at the time. By the end of that decade Tommy Igoe had a new favorite drum corps to root for, the Bayonne Bridgemen. Curiously, Dennis DeLucia was the man writing music for them. So in 1980, a 15-year-old Tommy Igoe convinced his father to let him audition for the Bayonne Bridgemen. Tommy Igoe had a successful audition and joined the 1981 Bridgemen drumline as a bass drummer. He eventually became a snare drummer.

Tommy Igoe’s first gig came at the age of 16. It was with a wedding band whose drummer hadn’t show up for a gig. Tommy Igoe did that wedding and was actually called back to do the remaining dates from the band’s fall wedding season. The coolest thing about those gigs was that Tommy was getting paid for doing them. Those were not only Tommy Igoe’s first gigs, but also his first professional ones.

In 1983, and after capturing various junior and senior high school drumming awards on the United States East coast, Tommy Igoe left the Bayonne Bridgemen to focus on his gigging career. He still managed to stay in contact with the world of drum corps by writing percussion scores for high schools. This enabled him to work with really good band directors and meat great professional teachers from the public school system. It was then that Tommy Igoe discovered the passion for drumming education that has been following him throughout most of his adult and professional life.

Tommy Igoe’s first big break came in the same year he left the Bridgemen. At the age of 18 Tommy Igoe found himself touring the world with the Glenn Miller Orchestra. In 1986, Tommy Igoe’s career really took off when he became an active member of the New York studio scene while simultaneously joining the ranks of Blood, Sweat and Tears as a touring musician.

The Glen Miller Orchestra and Blood, Sweat and Tears were great learning experiences for Tommy Igoe. He got to tour and gain a lot of experience from those gigs. The invaluable experience Tommy Igoe acquired during those years helped cement his name in the New York studio scene for the following years. He quickly became a sought-after studio drummer, playing for various commercials, records and subbing for pit drummers in Broadway shows. Tommy Igoe also got the opportunity to gig with great artists like New York Voices, Stanley Jordan, Art Garfunkel and Dave Grusin.

In 1997 Tommy Igoe was enticed to play for various Broadway shows that he ultimately refused. At the time, he was on the road with Art Garfunkel and playing with Stanley Jordan’s Band, amongst many other projects. He taught privately and had a quite balanced intake of road work, in that it wasn’t bothering him and was lucrative enough to make it worth it. Therefore, he didn’t have the need or will to work for those Broadway shows. His will changed in the spring of that same year when he was asked to join The Lion King and write its drum book.

At first, Tommy Igoe was unwilling to take part in such a project. However, he caved and ended up joining The Lion King after earing about its merits. The musical premiered in Minneapolis, Minnesota, United States in July, 1997 and opened on Broadway in October, 1997 at the New Amsterdam Theater. The Lion King has gone on to win six Tony Awards and is Broadway’s seventh longest-running show in history. Its financial success has led to other productions in North America and all over the world, and it has given Tommy the opportunity to develop work as an associate conductor.

Drumming education has always played a huge role in Tommy Igoe’s life. Most of what he learned came from very knowledgeable teachers like his father Sonny Igoe and guys like Dennis DeLucia and Darryl Bott. Seeing music education is in his blood, Tommy Igoe didn’t take long to realize how much he enjoyed that facet of drumming and how much good he was at it. In 2001, Hudson Music approached Tommy Igoe to write a DVD on the essential elements a beginner must be aware of when starting out. The DVD was named Getting Started, the forerunner to Tommy Igoe’s Groove Essentials franchise.

The idea for the Groove Essentials package came about in 2002. While working on a book called Essential Grooves, Tommy Igoe was contacted by Vic Firth’s president Rick Drumm to write a “grooves poster” for the drum set. Rick wanted the poster to be called Groove Essentials. This very fortunate coincidence spawned two very successful educational packages: Groove Essentials 1.0 (2004) and Groove Essentials 2.0 (2008) and more than a quarter million posters distributed around the world. Rick Drumm and Tommy Igoe’s partnership would give birth to yet another educational package/ poster combination. Great Hands For a Lifetime was released in 2010 with the intent of helping you keep your hands healthy by showing you how to build and maintain a strong technical foundation.

Throughout the years, Tommy Igoe has worked on several musical projects of his own. In 1997 he released New Ground, his debut CD. It features contributions from 24 musicians of the New York City’s music scene and a very eclectic collection of tracks. Tommy Igoe’s latest project is The Birdland Big Band. The band plays every week at the legendary Birdland Jazz Club to a sellout crowd. They’ve released the DVD Tommy Igoe and the Birdland Big Band: Live From New York (2009) and the CD Eleven (2011).

What Can We Learn From Tommy Igoe?

Tommy Igoe is a very technique oriented drummer. He loves technical drumming and watching drummers who have total command over the drum set. However, as a teacher and player, Tommy Igoe preaches groove playing and feel above everything else.

Tommy Igoe is a musician who happens to play drum set. Playing for the song and focusing on the groove is what matters the most to him. Nowadays, drummers tend to focus too much of their attention on the drumming side of things. They’re more focused on playing drums than on playing music. This is a big mistake many do because they neglect the biggest purpose of playing a musical instrument: making music with other people. For instance, Tommy doesn’t feel that practicing drum rudiments with the feet is necessarily wrong. If you can use it musically and effectively, then more power to you and your music. He just feels drummers should focus a lot more on playing along to music, learning the most important grooves and drumming concepts and going out and playing with other people instead of spending most of their time alone and playing exercises to a metronome all day long.

Tommy Igoe’s outlook on modern drum set playing is important because it helps you keep grounded. The emergence of chops-oriented drumming and of extreme-independence curriculums put together by guys like Thomas Lang, Virgil Donati, Mike Mangini and Marco Minnemann can easily steer you away from what you should be spending more time on. Think about it for a minute. How important is it to play everything you can think of with the hands over the 40 drum rudiments played with the feet, when you can’t play a basic 8th note rock beat to save your life? Practice whatever you like on the drum set but always remember to spend the majority of your time learning about the bread and butter of drumming: groove playing in any style of music you’re interested in.

Tommy Igoe’s love for rudimental drumming and the enjoyment he gets from practicing rudimental exercises and solos has taken him quite far in his quest for a healthy and proficient set of hands. The coolest thing about his hand technique is that it’s not based on a single method like the Moeller Method. It’s rather a hybrid of various concepts and techniques he learned throughout the years. Tommy Igoe’s approach to learning and developing hand technique is a great example of how one can develop their’s without the use of predetermined methods. This goes for learning anything on the drum set. There are always various ways to learn a certain subject, so don’t be afraid to come up with your own or mix and match different ones.