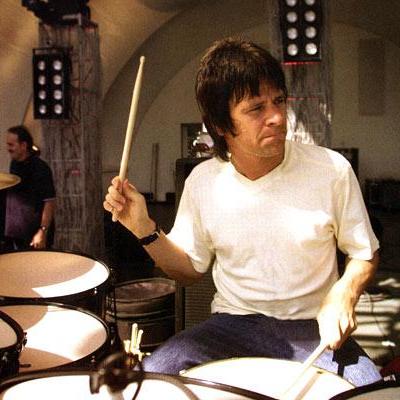 Who Is Zak Starkey?

Going through life as the offspring of an accomplished musician bestows a heavy burden, one many aren’t apt of coping with. When you look at Zak Starkey however, you don’t see the son of legendary drummer Ringo Starr, you see an accomplished studio and touring drummer who’s made a very successful career and name for himself. You could say Zak Starkey was destined to play drums, but once you get to know him a little more you’ll see he was actually determined to play drums.

Zak Starkey was born on September 13, 1965 to Richard “Ringo Starr” Starkey, drummer for The Beatles, and Maureen Cox. Being the son of one of The Beatles meant music was all around him since he set his hands and knees, and later his feet, on the ground.

As the son of a very famous musician, Zak Starkey was expected to follow on his father’s footsteps by fans and media alike. On the other hand, Ringo Starr objected that possibility, foreseeing his son as a lawyer or a doctor instead. However, Ringo didn’t take the needed precautions to avoid a future in music for his son–he actually fueled it constantly.

Zak Starkey was taken to a T. Rex concert by Ringo Starr, when he was only six years old. After the gig, Zak Starkey was so enthralled by it all that he wanted to be Marc Bolan, T. Rex’s vocalist. The concert, coupled with days spent listening to stacks of LPs laying around the family living room, were hugely influential on Zak’s love for music. Artists like Slade, Alice Cooper, T. Rex, David Bowie, and Sweat, were among his favorites.

“I’ll buy any record he wants, any of them, [even] can-can music, because I think it’s important. Jay – he’s six – only gets into it because of Zak – but Zak only got into it at six. Now [that] he’s eight he’s really into it. He has definite people he likes and others, he just hates them. (…) Now he’s learning the recorder at school. We’ve got a piano at home and he bashes it, I show him a chord. I think he will be a musician, in fact.” – Ringo Starr in Rolling Stone Magazine, January, 1974.

Among the stacks of LPs Ringo Starr kept around the house was The Who’s Meaty Beaty Big And Bouncy (1971). After stumbling accidentally on it, Zak Starkey became addicted to The Who, especially to Keith Moon‘s approach to drumming.

Zak Starkey’s first experience with a drum set happened at the age of 10, when Ringo Starr asked him if he wanted to learn how to play drums. Zak Starkey accepted his father’s proposal and immediately sat on Ringo Starr’s drum set. He was taught how to keep time by playing simple quarter notes before being left all alone to it.

“He said, ‘If you want to learn, put on headphones and play along to records.’” – Zak Starkey in “Zak Starkey” by Robyn Flans, Modern Drummer Magazine, July, 1997.

Much to everyone’s surprise, Zak Starkey kept up with it. He’d go home from school and just pound away on Ringo Starr’s drum set while listening to his favorite records. Zak Starkey’s influences at that point were hardly eclectic. During his first year of drumming he listened to Keith Moon, John Bonham, Billy Cobham and Clem Burke, exclusively. He didn’t give anyone else a chance.

Zak Starkey got his first drum set at the age of 11. It was a gift from Ringo Starr, a Ludwig kit with a 20 inch bass drum, 12 and 14 inch toms, and a piccolo snare. Zak Starkey set the kit on the dining room, driving his mom crazy during his daily sessions.

“I was never actively pushed to do anything like that, but I was never discouraged. I was left to do what I wanted, really. I’m sure they thought it would wear off after a while and I’d lose interest, but they were wrong!” – Zak Starkey in “Zak Starkey” by Robyn Flans, Modern Drummer Magazine, July, 1997.

Keith Moon was actually way more than Zak Starkey’s favorite drummer, he was his friend. You see, Ringo Starr and Keith Moon were great friends. Whenever there were parties at the Starkeys’ crib, “Moonie” would always make sure to spend some time chatting, drawing, or painting with Ringo’s kids.

After his parents divorced in 1975, Zak Starkey would spend a few days with Keith Moon at his house in Malibu whenever he went to visit Ringo Starr in America. When Keith Moon moved back to England he would often get together with Zak Starkey. It was actually Keith Moon who gave Zak Starkey his first professional drum set. It was a gift for Zak Starkey’s 12th birthday. The kit was one of Keith Moon’s own, a cream/ white Premier with copper hardware. Zak Starkey used that drum-set with his first bands in the 1980s.

Zak Starkey’s favorite The Who albums to play along with were Live At Leeds (1970), Who’s Next (1971), and Quadrophenia (1973). Besides the heavy rock of the 1960s and 1970s, Zak Starkey was also highly influenced by London’s punk scene. Bands like The Damned, The Stranglers, and The Sex Pistols were some of his favorites.

Zak Starkey began playing with bands at the age of 12. He formed his first band, The Next, with the brothers next door and a bassist, all in their late teens and 20s. After disbanding a couple of years later, Zak Starkey and The Next’s bassist put a band together that they called Monopacific. That project enabled him to keep earning gigging chops for two more years, as well as the opportunity to perform in Morocco for a Moroccan cancer-fund benefit. Near the end of 1983, they got close to signing with a major label. Unfortunately the band was unable to work out contractual agreements with its own management, leading to no contract and the band’s demise.

At the age of 16, Zak Starkey began doing a lot of session work. There was a studio very close to where he lived, whose owner he got to know after a jam at a pub. Most recordings were done for projects no one has ever heard of, but he eventually got to do some work with the reformed Spencer Davis Group. Zak Starkey’s professional career had began.

Three years later, and after Monopacific had folded, John Entwistle contacted Zak Starkey to see if he was available to do some work with him. Since he was free, Zak Starkey accepted John Entwistle’ offer and began working with him. Zak Starkey recorded one album with John Entwistle: The Rock. The album took a long time to make and was not publicly released until 1996.

In the mean time, Zak Starkey lent his talents to a couple of recordings released in 1985: Artists United Against Apartheid’s Sun City, where he performed alongside Ringo Starr; Roger Daltrey’s Under A Raging Moon, an album that includes tributes to Keith Moon from fellow drummers; Chris Thompson’s Radio Voices and Eddie Hardin’s Wind in the Willows.

For the second half of the 1980s, Zak Starkey was featured on various albums, from which Mike d’Abo’s (former Manfred Mann’s vocalist) Indestructible (1987), ASAP’s (the brainchild of Iron Maiden’s Adrian Smith) Silver and Gold (1989) and Pete York’s Super Drumming II (1989) stand out the most. He also drummed for The Icicle Works during 1988, but didn’t stay enough time with the band to be featured in any record.

In 1996, the three remaining members of The Who: Roger Daltrey, Pete Townshend and John Entwistle, performed the album Quadrophenia in Hyde Park. Due to his relationship with Keith Moon, his early study of The Who’s recordings and drumming abilities, Zak Starkey was invited to play Keith’s drum parts. The show was a success, leading to a six-night residency at Madison Square Garden, New York and to US and European tours from 1996 to 1997. Since then, Zak Starkey has become The Who’s drummer of choice, playing on numerous of their tours and recordings: Blues to the Bush (1999), Live at the Royal Albert Hall (2003), Then and Now (2004), Endless Wire (2006) and Greatest Hits Live (2009).

“Playing with the Who is the biggest rush there is. At eleven years old I used to go to bed dreaming about what I’m doing now. I don’t know how many people can say that.” – Zak Starkey in “Zak Starkey” by Robyn Flans, Modern Drummer Magazine, July, 1997.

Besides his involvement with Ring Starr and His All-Starr Band, and The Who, Zak Starkey recorded drums for many other artists’ albums during the 1990s, including Tony Martin’s (Black Sabbath ex-vocalist) Back Where I Belong (1992), Robert Hart (Manfred Mann’s Earth Band) Robert Hart (1992), The Semantics’ Powerbill (1996) and Simon Townshend’s (Pete Townshend’s Son) Among Us (1997). Between 1997 and 2000 he was also a member of The Lightning Seeds, taking part in the recording sessions for Tilt (1999).

Besides his high-profile gigs with The Who during the first decade of the 21st century, Zak Starkey worked with Oasis between 2005 and 2008. During that period of time he recorded drums for Don’t Believe The Truth (2005) and Dig Out Your Soul (2008).

What Can We Learn From Zak Starkey?

It can be quite hard for those giving their first steps in the world of music to know exactly the proper way in which they should approach their learning experience. “Should I take lessons or should I learn to play my instrument all by myself?” This is a question many musicians are faced with when starting out on any instrument. No matter the route you choose, rest assured that it’s not the only “right way” to learn.

Any of those routes has its ups and downs and rely upon the way you learn the best and on the quality of the mediums you choose to use, or are available to you. No matter if you take a do-it-yourself approach or take drum lessons with a teacher, you’ll be able to reach your goals, for the most part. The most important thing is that you practice, have a lot of fun and keep at it. Consistent practice and motivation will take you far.

Zak Starkey is a great example of a drummer who was able to go far by learning to play drums all by himself. He didn’t learn any drum rudiments and complicated music theory. He just took his favorite records, put on some headphones and went at it. This doesn’t mean it’s the only way to become good at drumming, or any other musical instrument for that matter. It means it’s possible to become very good at an instrument even without drum lessons.

Practicing regularly and focusing his attention on playing along to records helped Zak Starkey develop a very deep and strong feel on the drum set. He actually has develop a great set of chops that go very well with his pocket; however, that was never his main focus while playing–it’s a by-product. There are many ways to practice and improve your feel on the drums, but playing along to music is the best way.

If you want to improve your groove on whatever style of music, you have to listen to the music and to the drummers that have made it what it is. Try to replicate the feel, the dynamics and even the sound of the drums. Authenticity comes from a deep understanding and study of a genre and its main performers. Zak Starkey did so when he studied great names of rock music like Keith Moon and John Bonham.