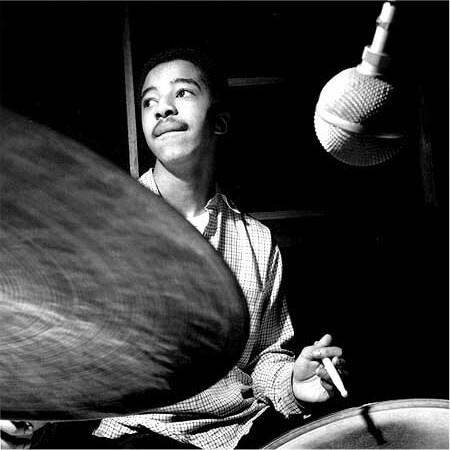 Who Is Tony Williams?

Anthony Tillmon “Tony” Williams was born in Chicago, Illinois on December 12, 1945. Tony Williams’ family moved to Boston, Massachusetts when he was a toddler. His father, Tillman Williams, was the main driving force behind Tony’s appreciation of music and jazz. As a saxophonist and music lover, Tillman had all the records of the day, including those from a new style of jazz music: bebop. Tony Williams was heavily subjected to his father’s records and to the music played in the various jazz clubs he was taken to on the weekends, whenever Tillman had a gig.

Tony Williams’ first kit was an old three-piece Radio King drum set. It comprised a 28, or 30 inch bass drum, a snare drum and a 16 inch tom mounted on the bass drum. The kit also came with a set of hi-hats. Tony Williams practiced every day and did almost nothing besides that. He’d get up in the morning and move to the drums in his pajamas. He’d play on a practice pad while watching television, and he’d go to a drummer friend’s house to play with him.

At the age of 11 Tony Williams could already be seen drumming in the Boston club-scene. At age 12 he performed with Art Blakey and at 13 with Max Roach. After learning to play drums all on his own for 4 years, a 13-years-old Tony Williams was put through private drum lessons. It was a very generous gift from his father, who saw the great passion Tony Williams had for drumming. The instructor chosen for the job was non-other than the great Alan Dawson, a teacher at the Berklee College of Music at the time. It was around this time that tony Williams began playing professionally though his gig with saxophonist Sam Rivers.

At the age of 15, Tony Williams was already perceived as one of the best drummers in Boston. He spent most of his early-teen years gigging with key jazz musicians like Sam Rivers, Gil Evans, Eric Dolphy and Cecil Taylor. At the age of 16 Tony was discovered by a touring Jackie McLean, when drumming for the house band that was supporting him. Jackie immediately invited Tony to join his quintet. After getting his mother’s permission, Tony Williams moved to New York City to perform with Jackie McLean.

Tony Williams recorded 18 albums with Mile Davis: 9 studio albums and 9 live albums. The ones that stand out the most are those recorded as part of Miles Davis’ second great quintet, playing alongside saxophonist Wayne Shorter, pianist Herbie Hancock and bassist Ron Carter. Together, they recorded historic jazz albums like E.S.P. (1965), The Complete Live At The Plugged Nickel (1965), Miles Smiles (1966), Sorcerer (1967), Nefertiti (1967), Miles in the Sky (1968) and Filles de Kilimanjaro (1968). The Complete Live at the Plugged Nickel is considered their biggest achievement as a group.

When Miles Davis’ interest in rock, soul and funk music of the late 1960s arose, the second quintet experienced a slow death. Before leaving Miles Davis’ in early 1969 to focus on his own band, The Tony Williams Lifetime, Tony Williams was able to record drums for the ground-breaking In A Silent Way, regarded by many as Miles’ first fusion record.

From the later years of the 1970s to the early years of the 1990s, Tony Williams continued composing, performing and recording with prestigious jazz artists. He reunited with his old Miles Davis bandmates by the end of the 1970s. Since Miles Davis was unavailable to play, Tony Williams, Herbie Hancock, Ron Carter and Wayne Shorter replaced him with Freddie Hubbard. The band toured and record for several years, releasing a series of live albums under the name V.S.O.P. or The V.S.O.P. Quintet. In 1985, Tony Williams was featured in a movie about jazz musicians in Paris called Round Midnight, alongside jazz legends Dexter Gordon, Billy Higgins, Herbie Hancock and John McLaughlin. Tony Williams formed his own quintet in that same year with pianist Mulgrew Miller, trumpeter Wallace Roney, saxophonist Bill Pierce and bassist Charnett Moffett. The band toured and recorded throughout the remainder of the 1980s and into the early 1990s. Other great artists Tony Williams played with includes Chet Baker, Stan Getz, Weather Report, Sonny Rollins, Michel Petrucciani, Jaco Pastorius, John McLaughlin and Marcus Miller.

Tony Williams’ work as a composer and songwriter was constant throughout his career. Several of his compositions were recorded by the Miles Davis quintet he was a part of and artists like Wynton Marsalis (Wynton Marsalis, 1981) and Branford Marsalis (Renaissance, 1987). Tony Williams also wrote most of the music for his bands and projects at a later stage in his career and a 20-minute piece called “Rituals” for string quartet, piano, drums and cymbals that was premiered by the Kronos Quartet. Tony Williams decided to devote his time and energy to studying composition when he was unable to come up with a tune for the The Joy of Flying.

“I didn’t have time to write anything for that album and I was disappointed in myself. I didn’t have the facility to put something together quickly that was quality. It frustrated me and I decided I would not continue like that, that I wanted to raise the level of my ability.” – Zan Stewart, Los Angeles Times, November 06, 1990.

In 1980, Tony Williams began a private course of classical study at the University of California, Berkeley with professor Robert Greenberg. The course ran intermittently until 1987 but was enough to equip Tony Williams with the compositional facility he lacked by the end of the 1970s.

“I remember when I started taking serious compositional classes, people were always asking me why I was doing it. They seemed to believe that since I had a record out I didn’t need to do anything else. I don’t understand that attitude at all. To me, being a musician is like being a doctor: You’ve got to keep up with all the changes, and the more you learn about your profession, the better off you are.” – Michael Point, Downbeat Magazine, 1996.

A great example of Tony Williams’ compositional abilities is his 1996 effort Wilderness, featuring Pat Matheney on guitar, Michael Brecker on saxophone, Herbie Hancock on piano and Stanley Clarke on bass guitar. Tony Williams began working on the album in 1994 through the song “Wilderness Rising.” As the song became more complete he played it for Dr. Olly Wilson, Tony Williams’ orchestration teacher and head of the music department at the University of California, Berkeley. At his suggestion, Tony Williams decided to make it orchestral, with the help of a 30-piece orchestra.

“I think my playing has been orchestral throughout the years, and this is another way of expressing that. But I primarily see it as the ultimate accomplishment of a musician. Composing makes me feel like I’ve finally gotten all the way up the ladder as a musician.” – Michael Point, Downbeat Magazine, 1996.

Tony Williams’ new musical endeavors and compositional explorations came to a screeching halt in February 23, 1997, when he suffered a fatal heart-attack following a routine gallbladder surgery. He was 51 years old at the time.

What Can We Learn From Tony Williams?

Tony Williams emerged onto the jazz-music scene with a very unique drumming style. He ended up blasting bebop’s conventions to smithereens with his use of polyrhytms and metric modulation. Tony’s style opened a new world of rhythmic possibilities that helped redefine the role of a jazz rhythm section.

A polyrhythm is a combination of two or more rhythms played simultaneously while moving at the same linear tempo. So generally speaking, two rhythms are considered a polyrhythm if the number one is their only common divisor. A great example of this can be heard in Stanley Clarke’s “Lopsy Lu” from his 1974 self-titled album. Around minute 2:45, Tony Williams plays a simple lick between the snare, bass drum and ride cymbal that creates a very strong 6-over-4 polyrhythm.

Metric modulation is used to increase or decrease the tempo at what you’re playing. It’s usually done in relation to the note value setting the pulse on the original tempo and can actually change its time signature. This is very common in classical music but not at all in “pop.” The term metric modulation is employed quite loosely these days. It’s often used when musicians talk about implied metric modulation, which is different from metric modulation.

Implied metric modulation is used to deceive the listener, in that it implies tempo and pulse changes by simply grouping subdivisions differently. It’s basically a rhythmic illusion. In a sense, you can think of implied metric modulation as a metric modulation that returns to the original speed, time signature and pulse, after you’ve temporarily “modulated” your grooves. To have a better grasp of this concept, play a continuous run of 8th note triplets in 4/4 time and with accents on the downbeats. Then, move the accent to each fourth 8th note triplet. If you count the accents against 4/4 time, you’ll notice you’re implying a three-feel. This makes it seem like you’re playing 16th notes in 3/4 instead of 8th note triplets in 4/4. For a cool example of Tony Williams’ tasteful use of metric modulation, listen to Herbie Hancock’s piano solo on Miles Davis’ “Gingerbread Boy,” from the November 7, 1967 concert in Karlsruhe, Germany. That song is a great example of another one of Tony Williams’ very unique nuances as a jazz musician: playing the hi-ht on all quarter notes instead of always on counts two and four.

Tony Williams wasn’t only about rhythmic illusions and advanced concepts. He’s considered the father of the “blushda,” one of the most beloved licks amongst drummers. The “blushda” is an non-alternating flam drag that’s usually played between the snare drum and toms. The term blushda was coined due to the sound the lick makes.