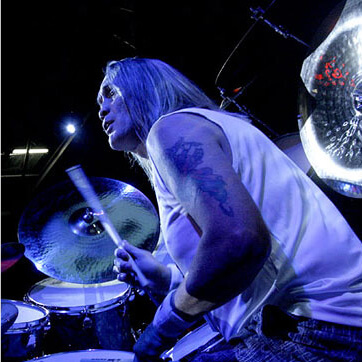 Who Is Nicko McBrain?

Michael Henry “Nicko” McBrain was born in Hackney, East London, England on June 5, 1952. Coming to prominence in the early 1980s as the drummer for heavy-metal gods Iron Maiden, Nicko McBrain has established himself as one of the main driving forces and inspirations behind heavy-metal drumming today. An inspiring musician with a larger than life but grounded personality, Nicko McBrain’s musical journey began quite unawarely at the age of 10 while watching television (TV).

Curiously, that defining moment in Nicko McBrain’s life came at the hands of The Dave Brubeck Quartet, a jazz band. While watching a TV show the quartet was featured in, Nicko McBrain became enthralled by the drummer, Joe Morello, while he performed a drum solo during one of the quartet’s most emblematic tunes, “Take 5.”

That event spurred Nicko McBrain’s interest in drumming immediately. After the performance he went straight into his parents’ kitchen, took two knives and began wailing away on the stove, the washing machine and anything he could make some noise with. The end result was quite heavy-metal: paint chipped off of everything and a lot of ripped up wood.

“My mother and father came out screaming, ‘What are you doing?’ (…) It started from there. The very first time that I thought about it or dreamed about it was after I saw Morello on television.” – Nicko McBrain in Nicko McBrain by Anne M. Raso, Modern Drummer Magazine, December, 1985.

As many of you may be well aware of by now, the drum set isn’t an instrument most parents thrill about. However, seeing the family on his father’s side had a background in entertainment and music, Nicko McBrain found in his father a very encouraging person to latch on to for motivation. Nicko McBrain’s father enjoyed listening to jazz and used to play trumpet, while his father was a semi-professional entertainer/comedian.

For the following year, Nicko McBrain fueled his love for drumming using knives as drumsticks and biscuit tins as drums. He eventually switched his “knifesticks” for his mother’s knitting needles, driving her mad in the process. With such passion and dedication, a proper drum set was definitely in order. Unfortunately for the young 11-year-old, patience had to be one of his biggest virtues earlier on.

A few months before Christmas, 1963, Nicko McBrain’s parents asked him what he wanted as a present. Unlike most kids, Nicko didn’t want a bike or any toys, he had only one exquisite wish: a drum set. Drum sets at that point in time were quite expensive, so Nicko McBrain had to wait one more year to get his hands on one. Hence, the following Christmas, he got a Broadway John Gray drum set from his parents. The kit had one snare drum, one tom, one cymbal, two drumsticks and a pair of brushes but was enough to get him started in the right direction.

“I got my first drum kit on the Christmas before my 13th birthday. My parents said, ‘This is going to be a five minute wonder if we ever saw one!’ And I said, ‘No, you’re wrong!’ My father said, ‘I think so, too.’ I’ll never forget that.” – Nicko McBrain in Nicko McBrain by Anne M. Raso, Modern Drummer Magazine, December, 1985.

Nicko McBrain’s early musical influences were primarily rock based. Bands like Led Zeppelin, The Rolling Stones and The Beatles were some of the acts that tickled his fancy. His greatest drumming influences actually came from those bands, namely John Bonham (Led Zeppelin) and Keith Moon (The Who). Nicko McBrain was also highly influenced by Vanilla Fudge and some of the greatest big-band drummers, like Buddy Rich and Gene Krupa.

Nicko McBrain’s first gig came only two weeks after acquiring his drum set. The concert was held at the Russell Vale School Of Dancing in Woodgreen, London, a dance school Nicko McBrain’s mother made him go to. The band consisted of Nicko and a guitarist and a vocalist he had met at school. They were paid ten Flake chocolate-bars each for performing The Rolling Stones songs. That gig kick-started Nicko McBrain’s gigging carrier in various school bands, playing the music of The Rolling Stones and The Beatles.

Nicko McBrain’s professional music career began at the age of 14, when he began playing regularly at pubs and weddings. Upon leaving school at 15, he began undertaking session work to earn his upkeep. He eventually joined his first “real” band, The 18th Fairfield Walk, a small pub-band that performed Otis Redding, The Beatles and The Who covers. Feeling that band was a dead-end, Nicko McBrain left to join The Wells Street Blues Band. The band renamed themselves as The Axe in 1969 but eventually disbanded.

In 1971 Nicko McBrain began playing with Michael “Mickey” Lesley, a guitarist, and Billy Day, a singer and keyboardist who was actually responsible for the nickname “Nicko.” McBrain was known as “Nicky” at that time, a nickname his parents christened him with as a little boy, after his favorite teddy bear Nicholas. One day, an intoxicated Billy Day introduced “Nicky” as “Neeko” to Dick Asher, head of CBS Records, during a recording session at CBS Studios, Whitfield Street, London. Nicko McBrain liked the name so much that he end up changing it to “Nicko” so it sounded more English.

In 1975 Nicko McBrain joined the Streetwalkers, an English rock-band that was mildly successful in the European music scene in the 1970s. After recording Downtown Flyers (1975) and Red Card (1976) he left the band, focusing almost exclusively in session work. His most memorable musical contributions in this period of his professional career came with the Pat Travers Band (1976-1977) and with French heavy-metal band Trust (1980-1982). You can listen to Nicko McBrain’s drumming at this point in time through Pat Travers Band’s Makin’ Magic (1976) and Putting It Straight (1977), and Trust’s Savage (1981).

It was through Nicko McBrain’s engagements with Trust that he got to know Iron Maiden. Trust had the opportunity to take part in Iron Maiden’s The Beast On The Road Tour (1982) as a supporting act. Throughout the tour a bond between the two bands developed due to their mutual respect and friendship. After Trust’s supporting deal with Iron Maiden was over they returned home and hit the studio to record an LP while Iron Maiden moved on to start the second leg of the their world tour.

During Trust’s recording sessions, problems arose between Nicko McBrain and the band, which ultimately led him to quit the project. Curiously, Clive Burr, Iron Maiden’s drummer at the time, was also experiencing issues of his own with his band. In December, 1982 it all came to head. Clive Burr was fired from Iron Maiden once his touring obligations on The Beast On The Road Tour were over, and Nicko McBrain was brought in as his replacement, starting over 30 years of musical collaboration.

Nicko McBrain has performed on 18 Iron Maiden world tours, from which the World Slavery Tour (1984-1985) stands out the most. It was the band’s most arduous to date, although being extremely successful. Iron Maiden performed 187 gigs over 331 days. The tour also had Iron Maiden play to the largest crowd of their career, performing to approximately 300 thousand people at the first edition of Rock in Rio, Rio de Janeiro, Brazil in 1985. For more information on Iron Maiden’s remaining tours click on this link.

Iron Maiden has been nominated for 29 awards, 20 of which they’ve won. The awards they’ve won consist of one Brit Award, one Grammy Award for “Best Metal Performance”, one Ivor Novello Award, one Kerrang! Award, one Bandit Rock Award, two Emma-gaala awards, eight Metal Hammer Awards, three Metal Storm Awards, one Nordoff-Robbins award, one Rockbjörnen award and their music documentary Iron Maiden: Flight 666 (2009) won the “24 Beats Per Second” award at the South By Southwest (SXSW) Film Festival in Austin, Texas in 2009.

Besides his work with Iron Maiden, Nicko McBrain has taken a stab at a couple of different ventures. In 1991 he released his instructional video Rhythms Of The Beast and in 2010 worked on Out Of My Mind/ Holy Water, a fund-raising two-track single from the supergroup WhoCares. Nicko McBrain has also developed his signature drumstick with Vic Firth and a line of signature Paiste cymbals called Alpha Boomer series.

What Can We Learn From Nicko McBrain?

Nicko McBrain’s single bass-drum foot-technique is one of the most advanced on the drumming community. He’s able to play gallops and fast 16th-note patterns without the use of a double pedal. His bass drum technique is very consistent, fast and powerful. Iron Maiden’s songs like “Where Eagles Dare” and “The Wicker Man” are great examples of Nicko McBrain’s fast single-pedal 16th-note patterns, while “Out Of The Silent Planet” and “Dream Of Mirrors” showcase his consistency, endurance and power while nailing down fast double strokes with a single foot.

“I didn’t use any particular method to develop my right foot—just lots of practice. And when you practice, you should play to songs or rhythms that require the figures you want to improve on (…) Play songs (…) and work on them a bit slowly until your foot strengthens up and you can build up the speed. I also feel that balance is very important, in terms of the way you sit and the way you approach the pedal. It doesn’t help to be too heavy on the front of the foot. You need to be very relaxed in regards to the foot pressure on the pedal. I tend to play on the top right quarter of the pedal plate with the left side of the ball of my foot and my big toe.” Nicko McBrain in “Ask A Pro”, Modern Drummer Magazine, May, 1994.

Another very attractive feature of Nicko McBrain’s drumming is his creative approach to drum fills. An exquisite example of this is the way he chose to introduce himself to Iron Maiden fans in his first album with the band: Piece Of Mind. Nicko McBrain plays a sick hand-to-feet combination pattern at the start of the first song of the album, “Where Eagles Dare,” that sets the pace for what fans could expect from him. “The Trooper,” from Piece Of Mind showcases an Iron Maiden trademark: syncopated drum fills that end on the “and” of count 4 with a crash/ bass drum unison-shot.

To rap things up let’s take a look at one final Nicko McBrain feature: his use of the ride cymbal. Nicko McBrain plays his ride cymbal more often than most heavy-metal drummers out there. Songs like “The Trooper” and “Where Eagles Dare” are exquisite examples of that. The main grooves for those tracks are played almost exclusively on the ride cymbal. There’s a good reason for Nicko McBrain’s heavy use of this instrument: