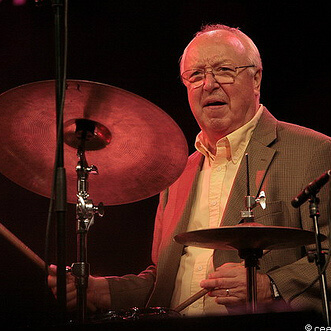 Who Is Jake Hanna?

John Edwin “Jake” Hanna was born and raised in Massachusetts. As a young kid living in Dorchester, Jake Hanna enjoyed smacking pipes, pots, pans and even stoves and washing machines with whatever he could put his hands on. Those early rhythmic manifestations would materialize into musical applications when at the age of 8 Jake Hanna joined St. Brendan’s Drum and Bugle Corps.

Jake Hanna’s first experiences with jazz drumming where fueled by his brother. They were great building blocks to what Jake Hanna would learn from the private drum lessons he would take later on with Stanley Spector, a famous jazz teacher from the Boston area.

“My brother showed me the cymbal beat early. Fortunately, he showed me the right way to do
it, with underlying triplets—not sixteenths.“ – Interview to Modern Drummer magazine, July Issue, 1982.

Jake Hanna quickly became a student of the jazz drummers that played for the great touring bands that performed at Boston’s vaudeville theaters at the time. To complement that visual approach to his learning experience Jake Hanna listened to as much records as he could, especially those featuring his favorite drummers, Papa Jo Jones, George Wettling, and Gene Krupa.

“We had it very easy. We were very lucky. Buddy Rich was with Artie Shaw and Tommy Dorsey; Buddy Schutz was with Jimmy Dorsey; Morey Feld was with Benny Goodman; Jimmy Vincent was out with Louie Prima; Jo Jones was with Basie’s band. I had a wonderful time watching those guys. It was the best training in the world.” – Interview to Modern Drummer magazine , July Issue, 1982.

Between 1944 and 1945, a 13 year-old Jake Hanna was already making a name for himself as a professional gigging drummer. This opportunity arose at such an early stage of his life because of World War II. With so many older drummers being drafted, Jake Hanna found himself with a lot of opportunities to work. For the following years Jake Hanna kept himself busy by playing for local groups and for the Dorchester High School for Boys band. In the late 1940s Jake Hanna played for bands led by Tommy Reed and Ted Weems. In 1950 Jake Hanna joined the Air Force where he studied under Lloyd Morales. Jake Hann worked on his rudimental, reading and drum set skills, and played in the Air Force service band.

After being discharged in 1953, Jake Hanna returned to Massachusetts poised on becoming a professional drummer. In 1956 Jake Hanna enrolled at the Berklee College of music in Boston. While at Berklee, Jake Hanna would study during the day and work for Buddy Morrow’s big band and pianist Toshiko Akiyoshi’s trio in the evenings. After leaving Berklee in 1958, Jake Hanna secured a gig as the house drummer at Boston’s Storyville Club.

“That was when a big change in my life came. The band included Buck Clayton, Bud Freeman and Pee Wee Russell and I had never realized what real quality playing was all about until then.” in “Jake Hanna: Drummer whose controlled power made him the linchpin of the Harry James and Woody Herman bands”, Steve Voce, The Independent, May 1, 2010.

The 1960s brought with them the greatest highlights of Jake Hanna’s career. The first of those moments came in 1961, when Jake Hanna joined trumpeter Harry James’ jazz swing band. Unfortunately, that shiny moment was short-lived. After securing Buddy Rich‘s services Harry James fired Jake Hanna. Jake Hanna promptly began searching for a new gig. Jake Hanna called pianist Nat Pierce and asked if he was in need of a drummer. Luckily for him Nate was putting together a new band for Woody Herman. Jake Hanna was offered the job on the spot, and from 1962 to 1964 was part of one of the greatest Woody Herman bands of all time.

“Jake is, I think,” Nat Pierce told this writer, “one of the most underrated drummers of all time.” in “Jake Hanna: Drummer whose controlled power made him the linchpin of the Harry James and Woody Herman bands”, Steve Voce, The Independent, May 1, 2010.

Jake Hanna’s relationship with the folks from Regal Tip goes back to the early 1960s. Jake Hanna was the first drummer to have a Regal Tip drumstick with his name on it. He was also the first drummer to release the last volume of a series of books before the first one. So in 1973, and after releasing Syncopated Big Band Figures – Duets – Vol.2, Syncopated Big Band Figures – Solos – Vol.1 was published.

After leaving Berklee Jake Hanna continued performing with Toshiko Akiyoshi for 3 more years. This enabled him to play for 4 consecutive summers at the New York’s Hickory House. In 1959, and after being impressed by Jake Hanna’s playing at Storyville, pianist Marian McPartland invited him to join her trio. Jake Hanna accepted and stayed with Marian until 1961.

In 1964 Jake Hanna was offered the job of house-drummer for “The Merv Griffin Show”. When in 1970 the show moved from New York to Los Angeles, Jake Hanna moved as well. The year of 1975 was a very eventfull one for Jake Hanna. He left “The Merv Griffin Show” to concentrate on his career in jazz music as a freelancer; he went on a highly successful European tour with Bing Crosby; the album Live At Concord, which featured a band he co-led with trombonist Carl Fontana, was nominated for a Grammy. The album had the distinct honor of being Concord’s biggest seller up to that point. The Bing Crosby gig lasted until Bing Crosby’s death in 1977.

Jake Hanna was key in getting Rosemary Clooney, Scott Hamilton, and Woody Herman to record for Concord. Jake Hanna also played a major role in Rosemary Clooney’s comeback, by choosing the songs and musicians for her first Concord album Everything’s Coming Up Rosie (1977).

What Can We Learn From Jake Hanna?

Jake Hanna’s whole drumming philosophy and approach was based on two very basic concepts: good taste and good time – the basic principals of any good musical drummer. If you can’t keep good time, if you don’t play with the feel and intensity a tune requires, you’ll end up detracting from its musical potential. The same goes for having a good, tasteful drumming. If you don’t play for the song, if you just play all of your impressive and cool sounding licks you’ll end up ruining what could otherwise be a very good tune.

It’s also important to complement what the other musicians are doing with as fewer notes as required. Since the most relevant aspect of playing an instrument in a band setting is making music, every note you perform has to have a goal within the structure and context of a song. Some songs ask for fewer notes while others ask for a lot more. In both cases, whenever you perform exactly what a song requires you’ll be playing as simple as required. The only difference is that in one case you’ll need less notes to do so than in the other. There is no “less is more” or “more is less”.

Another aspect of Jake Hanna’s drumming was his ability to fit in with any rhythm section. This is a rather relevant aspect of any drummer’s ability to play in a band setting, especially if you’re a freelance drummer. Musicians are quite different in their approach to the instrument they play. They have a different feel, musical ideas, and overall technical prowess. So whatever the situation you see yourself in you have to pay attention to how your band-mates play and react to the music. This will not only help you make the music feel better, since you’ll be able to complement and accompany them way better, but also give you a very good shot of being called back again by those musicians in the future. This works great for your career and for the music. It’s a win-win situation!

We’ll leave you with a very cool tip from Jake Hanna, for all of those drummers who find themselves playing with bad bassists quite often.

“Guys ask me, ‘What do you do with a bad bass player?’ I do what Louie Armstrong did: I play with the bass player in my head. I always hum a bass line. I might be humming “Indiana” while the band is playing “Stardust,” but at least I’ll be humming the feeling I hear in the bass part.” – Interview to Modern Drummer magazine, July Issue, 1982.