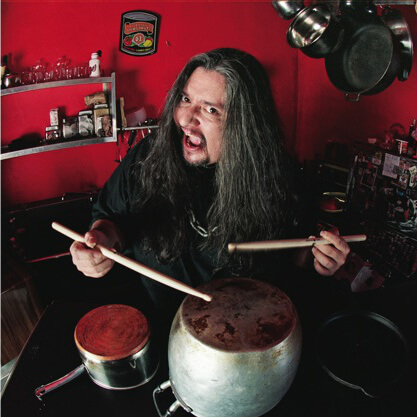 Who Is Gene Hoglan?

Eugene Victor “Gene” Hoglan II is one of the most creative and technically proficient drummers in the heavy-metal music scene since the 1980s. Gracing stages around North America and Europe with bands like Death and Strapping Young Lad has earned him a spot in the annals of heavy-metal drumming, especially because of his unorthodox but extremely precise and creative style.

It was a given since a very young age: Gene Hoglan was meant to be a drummer. He began drumming in his room at the age of nine, using a pair of drumsticks to air-drum to the music of bands like KISS, Cheap Trick, Aerosmith, Van Halen, and Angel.

“Man, I can remember my folks barging into my room on many occasions without knocking, as was customary for them to do, and catching me rocking out to whatever was on my turntable, and me freaking out at being caught redhanded, being that air-drumming goof.” – Gene Hoglan, taken form his official website.

In the summer of 1978, while visiting relatives in El Paso, Texas, Gene Hoglan experienced a life changing musical discovery. While going for a ride with his cousin Ken, he was exposed to Rush’s 2112 (1976). Listening to Rush for the first time had a huge impact on Gene Hoglan’s musical persona. He had found the ultimate band and the ultimate drummer, Neil Peart. Gene Hoglan got himself a copy of the record and immediately began learning to play Neil’s parts with his air drums.

At the age of 11, and after reading an interview with Peter Criss, one of his favorite drummers, Gene Hoglan decided he wanted to pursue a career in music as a drummer. At the time, Gene Hoglan was playing baseball at school and was very good at it, so his father advised him to just stick with it and forget about those rock n’ roll dreams. Guess he didn’t listen to his father.

Seeing he was set on becoming a professional musician, Gene Hoglan decided he had to learn as much as he could about how to make it in the music business. With the help of his sister, who was five years older, he’d go out to a bunch of concerts in the Los Angeles (L.A.), California club-scene. He was a good student and didn’t do drugs or drank, so his parents allowed him to stay up late and party. Gene Hoglan watched a lot of bands perform live, bands who hadn’t made it yet at the time: Slayer, Mötley Crüe, Dante Fox (known as Great White later on), Ratt, and Dokken, just to name a few. Over time, Gene Hoglan befriended several of the bands, especially Dante Fox and Slayer.

After air-drumming for about four years in his room, Gene Hoglan finally got his hands on a real drum-set at the age of 13. It was a used chrome-finished five-piece Slingerland with a huge bass drum, a 14 inch and a 15 inch tom, an 18 inch floor tom and a snare drum that was sold to him by Dante Fox’s drummer at the time, Gary Holland.

“I can remember, the first thing I played on it was ‘The Rover’ by Zeppelin, and I wasn’t even a huge Zep fan at the time, but I knew at the time that I would have to tell this story someday, just like now, so, ‘Remember your first song on your first kit, dude.’ I then moved my turntable out to the garage, and I left my professional air-drumming ways behind.” – Gene Hoglan, taken form his official website.

As most self-taught drummers, Gene Hoglan developed his chops all alone while playing along to records. The only formal lessons he ever had were at school. He didn’t take them on a drum set or even a snare drum though. The lessons were on a viola, the middle voice of the violin family, between the violin and the cello. Gene Hoglan stuck with it for a while, taking the instrument home to play Molly Hatchet songs on it like if it was a guitar. He eventually quit, focusing solely on drums.

Practicing around five to six hours a day for a few years straight skyrocketed Gene Hoglan’s drumming development. During that period of time he had two eye-opening musical experiences in the songs “Brother to Brother” by Gino Vannelli and “Presto Vivace” by UK. Playing along to progressive-rock musicians like those, Rush, Yes and King Crimson, helped him develop his chops pretty quickly.

Around the time he was 14 years old, Gene Hoglan’s biggest heavy-metal influences where bands like Raven, Anvil, and Jag Panzer. He actually learned to play every song from Raven’s Wiped Out (1982) due to its heavy dose of double-bass drumming. Rob “Wacko” Hunter from Raven and Robb Reiner from Anvil were his favorite heavy-metal drummers, alongside guys like Tommy Aldridge, Cozy Powell, Phil “Philthy Animal” Taylor, and Animal of the Muppets.

“I could never find anything fast enough, or heavy enough, though, so I started delving into the NWOBHM (New Wave Of British Heavy-Metal), and all the great European and Japanese bands, like Torch, More, Angel Witch, Accept, Tank, Motorhead, Bow Wow, Titan, etc.” – Gene Hoglan, taken form his official website.

In 1983, Gene Hoglan began running lights for Slayer’s live shows and performing Dave Lombardo’s soundchecks. Seeing he was close to the band’s members, he was actually invited to their rehearsals. It was on one of those occasions that he got to play on a double-bass set up for the very first time. Dave Lombardo had just added a second bass drum to his set up and didn’t really know how to play double bass. Gene Hoglan sat at the drum set and began playing it effortlessly. Seeing Gene Hoglan’s proficiency with his feet, Dave Lombardo decided to take as much tips and tricks as he could from Gene, so he could develop his own double-bass chops. In a sense, Gene Hoglan taught Dave Lombardo how to develop his double-bass chops.

Gene Hoglan’s record debut was actually in Slayer’s Show No Mercy (1983), where he’s featured doing backup vocals in the song “Evil Has No Boundaries.” He also contributed to the recording of Haunting the Chapel (1984) by holding Dave Lombardo’s kit in place as he recorded “Chemical Warfare.” This was necessary because the studio lacked a carpet to place beneath the drum set. After the recording of the album, Slayer went on the Haunting The West Coast Tour in the summer of 1984, with Gene Hoglan as a roadie. During the tour, Gene Hoglan befriended guitarist Michelle Meldrum, with whom he’d form the band Wargod shortly thereafter. However, Wargod wasn’t in the cards for him.

As 1984 approached its blue hour, the trash-metal outfit known as Dark Angel kicked-out their drummer. Seeing Gene Hoglan had become friends with the band in virtue of their many commitments as an opening act for Slayer, they decided to ask him to join their ranks. With Michelle Meldrum’s blessing, Gene decided to accept the challenge. Through the later half of the 1980s Gene Hoglan was able to make a name for himself through the work he developed with Dark Angel. He quickly became a reference in the heavy-metal music scene, not only for his fast, powerful and creative drumming, but also for his musical contributions to Dark Angel’s albums as a songwriter, lyricist and guitarist.

Dark Angel was the first of many great trash-metal bands and artists Gene Hoglan had the pleasure of infusing his very unique style to. From 1984 onwards he played for influential acts like Death, Devin Townsend, Strapping Young Lad, Testament, Dethklok, Fear Factory, Forbidden, and Zimmers Hole, among many others.

Gene Hoglan played with Dark Angel from 1984 all the way through 1992. They released four studio albums: We Have Arrived (1984), Darkness Descends (1986), Leave Scars (1989) and Time Does Not Heal (1991), a live album called Live Scars (1990) and the compilation album Decade of Chaos: The Best of Dark Angel (1991). Dark Angel eventually reunited between 2002 and 2005. Unfortunately, the brief reunion reached a screeching halt due to Ron Rinehart’s (vocalist) health issues.

In the years that preceded the reunion, Gene Hoglan worked with some of the greatest heavy-metal acts of all time. He recorded two albums with Death: Individual Thought Patterns (1993) and Symbolic (1995), one album with Testament: Demonic (1997), and began his long-standing collaboration with Devin Townsend. He has since recorded five albums with Devin’s Strapping Young Lad: City (1997), the live album No Sleep Till Bedtime (1998), Strapping Young Lad (2003), Alien (2005) and The New Black (2006), and is featured on four of Devin’s solo recordings: Infinity (1998), the EP Christeen plus 4 Demos (1998), Physicist(2000) and Terria (2001).

On December 26, 2006, Gene Hoglan announced to the world he was recording music with Brendon Small, the creator of the animated tv-show Metalocalypse. Gene Hoglan was hired by Brendon Small to record drums for Dethklok’s first album, The Dethalbum (2007). Dethklok is a highly successful virtual death-metal band whose members are the main characters for Metalocalypse. Brendon Small decided to put together a real version of the band and release the music he had created for the series, with the help of great heavy-metal studio musicians. Gene Hoglan has been with the band ever since and has taken part in the recording of Dethalbum II (2009) and Dethalbum III (2012), as well.

What Can We Learn From Gene Hoglan?

It’s impossible to talk about Gene Hoglan’s greatest features without taking a look at his double-bass drumming abilities. Like most heavy-metal gods of today, the words that best describe his feet are fast and accurate. Gene Hoglan began developing his double-bass drumming technique using a single pedal and the hi-hat pedal. He got that technique from Gary Holland, who encouraged him to practice double bass stuff that way, until he could get another bass drum. Although the feel of the hi-hat pedal is way different from that of the bass drum pedal, practicing like so helped him develop control and coordination, which made it way easier to transition to a double-bass-drum set-up later on. If you can’t afford a double pedal or an extra bass drum, this is a great way to work on double-bass drumming.

What’s most astonishing about Gene Hoglan’s foot technique is that he plays at blazing fast tempos using work boots and Camco pedals (launched in 1981 and discontinued in 2001). These pedals have nothing special about them when compared to the industry standard for heavy-metal drumming: Axis pedals. This comes to show how footwear and type of pedals have nothing to do with speed, accuracy and control. It’s all about practicing hard and never giving up.

Besides these very unique traits of Gene Hoglan’s approach to double-bass drumming, he also enjoys using ankle weights for warming up and practicing. He uses them during gigs as well. He removes them after the first couple songs so the remainder of the set is way easier to play. Practicing with ankle weights will be a great help for improving your chops faster. For an example of Gene Hoglan’s awesome feet, check the intro from Dethklok’s “Laser Cannon Deth Sentence” from Deathalbum II. In it, you’ll hear Gene Hoglan playing a continuous stream of 16th note triplets for 30 seconds and at a blazing fast tempo of 155 BPM. BEAST!!

Creativity is another one of Gene Hoglan’s biggest trademarks, including his usage of odd devices for percussion effects like torpedo shells and boat propellers. You can listen to him play a propeller in Death’s “Overactive Imagination” from Individual Though Patterns. “In Human Form” from Individual Though Patterns is another great example of Gene Hoglan’s creativity. There’s a section in 6/8 time-signature where Gene Hoglan plays the afro-Cuban bembé bell pattern on the ride cymbal. Gene got this idea from Steve Gadd, whose playing he was exploring at the time. No matter the style of music you play, you can always get ideas and inspiration from drummers who play different styles from you.