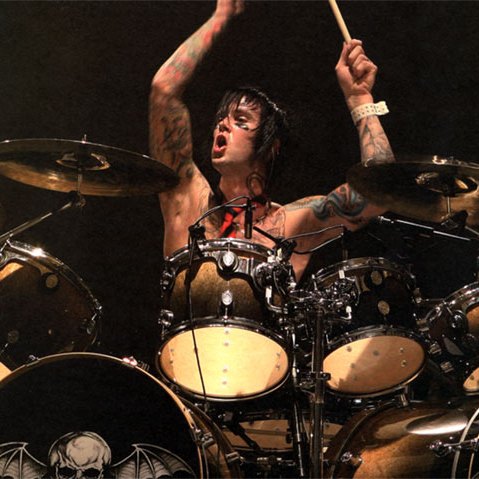 Who Is The Rev?

James “Jimmy” Owen Sullivan – known by the stage name “The Reverend Tholomew Plague” or just “The Rev” – started his musical journey at the tender age of five with piano and drum lessons. His early beginnings were urged by his parents will of having him learn to play a musical instrument.

“I fought them on it, but I was always kind of interested.” – Interview given to DRUM! Magazine, November 2007.

“She was very influential in me being a musician in general (…) and she taught me about music theory as well as drum theory. She’s always pumped me up and never failed to point out to me that she thought I had a lot of potential as a drummer. I think a lot of drum instructors don’t really influence you to try to write music; they mainly focus on drumming, you know?” – Interview given to DRUM! Magazine, November 2007.

He started by stealing drum licks from Carmine Appice and learning Lars Ulrich‘s drum parts for Metallica by transcribing them. As he developed his playing, he moved on to the harder and faster music from his favorite heavy-metal bands of the time: Pantera and Slayer. It didn’t take long for him to develop interest in progressive rock through Dream Theater and Rush, and interest in funk and fusion through the masterful drumming of Dave Weckl and Terry Bozzio. It was around this time that Jimmy “The Rev” Sullivan joined the L.A. Harbor College percussion ensemble by the hands of Jeanette Wrate. He was in it from sixth to eighth grade and amongst other things, played music from King Crimson and Frank Zappa. By the age of eleven, Jimmy “The Rev” Sullivan was not only performing with a percussion ensemble, but also playing the dreaded song “Black Page” from Frank Zappa.

“It was very important because I think technical training can help accelerate the learning process. For example, what would take someone without professional training a year to learn might take someone with good instruction, a month. It can accelerate the process an awful lot.” – Jimmy “The Rev” Sullivan talking about the importance of technique and good drum tutors in an interview given to DRUM! Magazine, November 2007.

By the time Jimmy “The Rev” Sullivan got into Huntington Beach High School, he began playing with a slew of bands. This left him no time for drum lessons. By his sophomore year of high school, Jimmy “The Rev” Sullivan was already playing with punk rock bands at parties. Now, Jimmy “The Rev” Sullivan was far from the image of an ideal student. So in 2000 he was expelled from Huntington Beach High School due to behavioral infractions, and from the high school he enrolled in later on. After those two failed experiences, Jimmy decided to drop out of high-school. This wasn’t the first time Jimmy “The Rev” Sullivan had had issues with the school he was at. He had already been expelled from a catholic school in the second grade. It was during his time in that catholic school that he met Matthew Sanders. Matthew and Jimmy, along with Brian Haner, would become best friends by the time they got to the seventh or eighth grade.

In 1999, Matthew Sanders and Jimmy “The Rev” Sullivan got together with Matt Wendt and Zackary Baker to form a band. Everyone in the band had been assigned to come up with a list of names for the band. Only Matthew followed through with the assignment. The band settled with the name Avenged Sevenfold. Although none of them were religious, Matthew Sanders came up with the name as a reference to the story of Cain and Abel from The Bible – found in Genesis 4:24. They also decided to take on stage names, which funny enough, were already nicknames of theirs from high school. Jimmy Sullivan became known as “The Reverend Tholomew Plague” or “The Rev”; Matthew as “M.Shadows” and Zackary as “Zacky Vengence”.

On December 28, 2009 Jimmy “The Rev“ Sullivan was found dead in his home. The cause of death was revealed to have been an acute polydrug intoxication due to combined effects of a series of drugs with alcohol. His enlarged heart may have played an important role in his untimely death. Jimmy “The Rev” Sullivan was one of the greatest drummers in the world of heavy-metal drumming by the time of his death. The number of people his music and drumming touched throughout the years, and the respect he earned from his pears are a testament to the great legacy this awesome musician left behind once he left us. Rest in peace Jimmy.

In addition to Avenged Sevenfold, Jimmy “The Rev” Sullivan worked as pianist and lead vocalist for Pinkly Smooth, an avant-garde metal project he began with “Synyster Gates” in 2001. Jimmy’s stage name was “Rathead”. He also played drums for Suburban Legends, a third-wave ska band he was a part of in 1999. He recorded piano, vocals and drums for Pinkly Smooth’s 2002 release Unfortunate Snort, and played drums for Suburban Legends’ first album Origin Edition (1999).

Avenged Sevenfold’s debut album Sounding The Seventh Trumpet was recorded when the band members were just eighteen years old. However, it was only released in 2001 through the record label Good Life Recordings. The album was fully funded by the money Avenged Sevenfold’s members earned by working random jobs here and there. Jimmy “The Rev” Sullivan contributed with drums and backing vocals for this record. Prior to its launch, Avenged Sevenfold recorded two demos. Jimmy “The Rev” Sullivan contributed drums and backing vocals for the 1999 demo and drums, backing vocals, and piano for the 2000 demo.

Sounding The Seventh Trumpet was re-released on Hopeless Records in 2002 just before the release of Waking The Fallen in 2003. Jimmy “The Rev” Sullivan contributed drums and backing vocals for this album. It was through this album that the band started to receive recognition, performing with bands such as Mushroomhead and Shadows Fall, and playing on the Take Action Tour. In 2005, Avenged Sevenfold released their breakthrough album City Of Evil – their first gold record – which was certified platinum in August 2009. “Bat Country” – the main single for the album – reached #2 on Billboard’s Mainstream Rock Charts, #6 on Billboard’s Modern Rock Charts and #1 on MTV’s Total Request Live (TRL).

In 2006, Avenged Sevenfold played Ozzfest, headlined The Warped Tour and won a Video Music Award (VMA) for “Best New Artist”. In 2007, the band released the DVD All Excess – which debuted as the #1 DVD in the United States – and their fourth self-titled studio album. This album won “Album of the Year” at the Kerrang! Awards. In 2008, Avenged Sevenfold headlined the Taste Of Chaos Tour and released the CD/DVD combo Live in the LBC & Diamonds in the Rough.

What Can We Learn From The Rev?

“I realized it’s a muscle thing: You just train the muscles. That was harder than learning any of the interdependence or funk stuff. Getting your muscles up to par for double bass is ridiculous.” – Interview To DRUM! Magazine, November 2007.

There are two very important lessons that you can take from Jimmy “The Rev” Sullivan here. First, although he began working heavily on his double bass chops at a later stage of his career, he still become a wickedly good double bass drummer. This comes to show that no matter the age at what you start working on a given aspect of your drumming, you can still become extremely proficient at it. You just have to put in the time to develop it. Second, having proper educational material or a good drum instructor can make a world of difference while developing yourself behind any instrument. If Jimmy “The Rev” Sullivan had had a double bass drumming expert teaching him early on or had access to a website like this one, it would’ve become way easier for him to develop his double bass chops.

Double bass drumming became a great part of Jimmy “The Rev” Sullivan’s playing. One of his most known trademarks were the fast single stroke roll-based bass drum patterns he played while performing different rhythmic figures around the drums and cymbals. He did this as a way to beef up his drum beats and drum fills. One of the most notorious examples of this can be heard in the song “Almost Easy”. In the intro section, Jimmy “The Rev” Sullivan plays a 16th note unison figure between the bass drum and two ride cymbals. He only breaks up the unison figure to play the snare drum on counts 2 and 4. “Almost Easy” has some of the most original patterns Jimmy “The Rev” Sullivan came up with during his career.

Originality is another big features of this drummer. Jimmy “The Rev” Sullivan’s drum fills and beats are filled with original ideas and concepts that are sure to spice up any drummer’s repertoire. The song “Critical Acclaim” is another great example of just that. It has a very cool and unexpected four-over-three polyrhythm that goes into a 3/4 herta drum fill just before the first verse of the song.

Jimmy is undoubtedly a very cool and fun drummer to study. We encourage you to check out Avenged Sevenfold’s recordings with him on the drum set. Learn his drum parts and don’t forget to check out his awesome sounding and original hand-to-feet combinations – another one of his crazy trademarks.