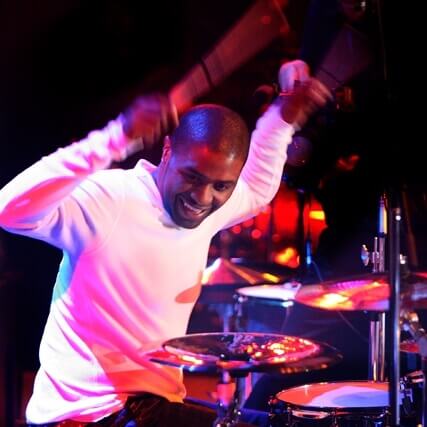 Who Is Teddy Campbell?

There are plenty of extraordinary drummers out there but not as much high-profile gigs and opportunities. It’s pretty uncommon for a drummer to need more than five fingers to count the number of successful acts they’ve worked with, unless they’re Teddy Campbell. From Britney Spears to the American Idol band, from The Tonight Show with Jay Leno to Christina Aguilera, Teddy Campbell has played for so many famous artists and tv shows that if he’d start counting them with his fingers, he’d have to take off his shoes.

Growing up in the gospel music scene of Chicago, Illinois, United States, Teddy Campbell discovered his love for music and drums at the Christian Youth M.B. Church of Chicago. At the age of three he was already showcasing a natural predisposition toward percussion by beating on his mother’s pots and pans. The family sofa was a great snare drum, lamp shades turned out killer cymbals, and the pots and pans made for great toms.

Teddy Campbell played drums for the first time when he was four years old. This life changing experience turned out to be a great moment as he was able to play along the song “Call Him Up” at church. The song is based on a fairly fast 8th note drum beat with a four-on-the-floor kick drum pattern. In church, if you could play that song, you could play the drums. From then on there was no turning back; Teddy Campbell wanted to pursue drums.

For the following years Teddy Campbell played and practiced as much as he could. He would do anything to get behind a drum set: ditch school and his homework, refuse to go out with his girlfriend, etc. Teddy Campbell learned to play drums by playing along to gospel records. He also became a regular in the church-music scene by playing for different choirs around Chicago.

At the age of 14 Teddy Campbell began playing professionally. It was also at that point in time that he met Oscar Seaton, his first major drumming influence, while Oscar was performing at church with a choir called the Soul Children of Chicago. Oscar Seaton, who would eventually play for artists like Lionel Ritchie and Joe Sample, got Teddy Campbell interested in different styles of music. Besides Oscar Seaton, Teddy was also into church drummers like Dana Davis, who used to play with the Winans, and Joel Smith, who played with the Hawkins. Those three drummers were his major drumming influences in the gospel side of drumming.

Learning about different styles of music prompted Teddy Campbell to get acquainted with drummers like Vinnie Colaiuta, Dave Weckl, Steve Gadd, and Will Kennedy. He also acquired a great enjoyment from listening and playing along soul and funk masters like Marvin Gaye, Parliament, Earth, Wind & Fire, and Motown artists from the ’60s. Getting old enough to understand and be interested in other styles of music was great for Teddy Campbell’s drumming and musicianship.

Will Kennedy and the Yellowjackets actually had a tremendous impact on the way Teddy Campbell perceived jazz. Their music was jazz but at the same time reminded him of gospel.

“(…) As soon as I got home from school, I didn’t even do my homework. [laughs] I just got on the drums and played until my mom came home from work. I had about three hours a day to practice, blazing away to Dave Weckl, Vinnie Colaiuta, and Will Kennedy with the Yellowjackets.” – Teddy Campbell in “Back Through The Stack” by Billy Amendola, Modern Drummer Magazine, September, 2005.

Immediately after finishing high-school in Chicago, Teddy Campbell began touring with gospel-inspired stage shows. However, the desire to make a living as a professional drummer led him to try his luck in Los Angeles (L.A.), California in 1998. Once he got to L.A. he hooked up with a pop-rock act called Dakota Moon, with whom he toured a lot, including internationally. His next gig came with LSG, a rhythm and blues (R&B) outfit composed of Gerald Levert, Keith Sweat, and Johnny Gill. The band was rehearsing in L.A., which enabled Teddy Campbell to move to L.A. permanently. He went on the road with them shortly thereafter.

“When I first started playing with Rickey, I didn’t think he realized I wasn’t reading. But after a while he knew and he came to me and said, ‘Man, I know you can’t read. But I like the way you feel and I like what you do. So when the charts show up, follow them as much as you can. Use your ears and do what you do.’ So that’s what I did. And after a while I started seeing the charts so much—all of the symbols and signs—that everything became familiar. Of course, it’s been a few years, so if you put a chart in front of me now, I’m straight.” – Teddy Campbell in “Back Through The Stack” by Billy Amendola, Modern Drummer Magazine, September, 2005.

Getting to work with Rickey Minor was the best move Teddy Campbell could have ever made. Teddy Campbell’s professionalism and musicianship were highly appreciated by Rickey Minor, who took Teddy Campbell with him to as much projects as he could. Their most prominent work was seen and heard by millions of people for various years during the lengthly run they had with American Idol.

This great relationship has led Teddy Campbell to play drums for the house band of other famous TV shows, like Don’t Forget The Lyrics, America’s Got Talent, and Celebrity Duets. As of lately, Teddy Campbell and Ricky Minor have been working together as members of the house band for The Tonight Show with Jay Leno.

Rickey Minor was also highly influential in making of Teddy Campbell an MD. Teddy Campbell’s first gig as an MD was for the adult contemporary boy-band 98 Degrees, with whom he also played drums. Following that successful stint he began putting bands together and drumming for Deborah Cox, Kelly Price, Mary Mary, and Britney Spears, at the height of her popularity.

Teddy Campbell is not all about TV shows and touring; he’s featured in many records as well. Stevie Wonder’s A Time To Love (2005), Sisqó’s Return Of The Dragon (2001), Mary Mary’s Incredible (2002) and Mary Mary (2005), George Duke’s Duke (2005), Herbie Hancock’s Possibilities (2005), Kelly Clarkson’s Thankful (2003), Deborah Cox’s The Morning After (2002), Stacie Orrico’s self-titled album (2003), and the soundtrack for the movie Stuart Little 2 are some of the recordings he’s been involved in. For more information on Teddy Campbell’s career, check his official website.

On a more personal level, Teddy Campbell’s most prominent work has been developed with The Teddy Campbell Band and a gospel band called the Soul Seekers, in which he and Nisan Stewart perform as a singers. The Soul Seekers won a 2006 Stellar Award for “Quarter Group of the Year,” the highest achievement in gospel music. If you’re interested in learning about Teddy Campbell’s drumming, check his performance, interview and lessons on the DVD for the 2006 edition of the Modern Drummer Festival.

What Can We Learn From Teddy Campbell?

Teddy Campbell’s career is a perfect illustration of what’s possible to achieve when you focus on the most important aspect of drumming: feel. Teddy Campbell’s feel stems primarily from his experiences with gospel and funk music. Those styles of music are all about natural, unadulterated feel. What we mean by unadulterated is that in order to feel the music properly, every hit has to come from the heart and not from the brain. Things have to be felt and your body has to react to it naturally. Teddy Campbell has been using this approach successfully on every style of music he plays.

“My style is a little different in that I try to give some of that natural, funky feel to things that might not normally be played too funky. I guess I play with a little more heart than someone who hadn’t played a lot of funk and gospel might.” – Teddy Campbell in his DrummerWorld page.

Therefore, if you’re aiming at being a professional musician, we highly encourage you to do as Teddy Campbell and check some gospel and funk records to start listening and playing along to. Gospel artists like The Winans and The Hawkins, and funk acts like James Brown, Tower of Power, and Parliament-Funkadelic are great representatives of those styles of music.

No matter how much feel you have, there has to be a certain degree of authenticity in what you play. Let’s face it, if you play rock with great meter and feel but hit your drums like a jazz drummer, you won’t be able to make your drumming fit the music. Authenticity comes from listening, playing, and understanding how a given style of music works. It’s more the result of knowing how to play than what to play. This is also extremely important if you’re trying to make it big as a professional drummer; learning about different styles of music is crucial. Much like Teddy Campbell did, surround yourself with as much music as possible. Listen to the music, understand how it feels and what its main ingredients are. Play along to as much music as possible as well.

Through Teddy Campbell we’ve been exploring various aspects of drumming that you can work on to become a great professional drummer. We’ve talked about feel and dexterity in many different styles of music; however, we haven’t talked about what’s arguably one of the most overlooked aspects of any big professional drummer: the ability to read music. As you read this you may start thinking to yourself, “Well, Teddy didn’t know how to read as he began making a name for himself in L.A and look what he has accomplished.”

Although that’s true, if he hadn’t learned to read in the meantime, he wouldn’t have gotten the opportunity to be a part of the American Idol and Don’t Forget The Lyrics house bands, for instance. You see, every week, Teddy and the Idol band had to record an album worth of material in a single day. To do so they were handed charts they’d have to read and interpret as they were recording. Otherwise, it would take way much more time to do so. Also, Teddy Campbell had to learn about 1000 songs for Don’t Forget The Lyrics. In order to accomplish that efficiently he had to rely on rehearsals and his reading abilities, due to the humongous amount of material he had to master.