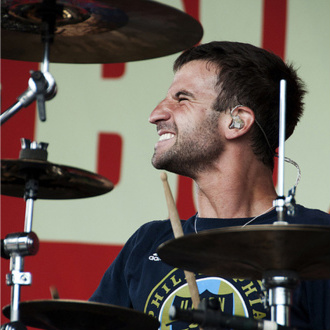 Who Is Matt Greiner?

As one fifth of the metalcore outfit known as August Burns Red, Matt Greiner has been raising the bar of the heavy-metal-drumming scene for some years now. His powerful, precise, fast, groovy and creative drumming has been turning heads and earning him accolades all over the world. With a very down to earth attitude and focused mind-set, Matt Greiner is definitely on the way to becoming one of the greatest musicians heavy-metal has ever seen.

Although great things seem to be in the cards for this Pennsylvanian, his first dabblings in percussion began naively. As a toddler, Matt Greiner played beats with his little hands on his parents kitchen table or any other surface he could make sounds with. A nuisance to his mother, Matt Greiner found in his father a powerful ally to his innate sense of rhythm by encouraging his mother to let him express his musicality freely. His mother eventually hoped on the Matt Greiner bandwagon, being the main driving force behind Matt’s first experiences with a musical instrument: the piano.

At the age of 10, Matt Greiner’s mother signed him for piano lessons with a local teacher. He learned to sigh read and developed his sense of dynamics and melody, showcasing a very keen and natural sense of rhythm and meter while doing so. After four years of honing his skills on an instrument he wasn’t enthralled with, Matt Greiner pulled the plug on the lessons and quit playing piano.

With the piano out of the way, Matt Greiner was determined on pursuing his true calling: drumming. He began by urging his parents for a snare drum. Unwilling to continue listening to her son play drum beats on the piano instead of tunes, Matt Greiner’s mother convinced his father to fulfill his wishes. Shortly thereafter Matt Greiner received his first drum, a Ludwig snare drum. Matt played that instrument for hours on end, tinkering with basic drum rudiments and getting used to having sticks in his hands.

At the age of 16, Matt Greiner purchased his first drum set, a chrome-finished Pearl Export that cost him a whole summer of mowing lawns. For the following two years he played every day in his parents’ basement. He then began performing for his church, a couple youth groups and whatever church events he was invited to take part in. When his family switched churches he immediately became the main drummer for its youth group worship team. Being raised on Christian contemporary rock/worship music made him a perfect fit for those bands.

Matt Greiner’s first experiences with making heavier styles of music came with the punk-rock band Second Hand. While attending one of their shows he was invited to join them since they had just lost their drummer. Matt Greiner decided to give it a go. He learned all of their songs off of a cassette tape and practiced with them a few times. It didn’t take long for Matt Greiner to get pretty tired of playing the same punk drum beats over and over again. He eventually quit the band, even before they had the chance to perform live with him.

After playing many shows and developing a following locally, August Burns Red recorded their first extended play (EP), Looks Fragile After All (2004). A few months later they signed a deal with Solid State Records and released Thrill Seeker (2005), their first full-length album. Messengers, August Burns Red’s breakthrough album, was released in 2007. The album reached number 81 on the Billboard 200 and has sold over 100 thousand copies.

After returning from a series of promotional tours, August Burns Red hit the studio to record a version of “Carol of the Bells” for the X Christmas (2008) compilation album and Britney Spears’ “…Baby One More Time” for the Punk Goes Pop 2 (2009) compilation album. In 2009 they released their second EP, Lost Messengers: The Outtakes, and their third full-length album, Constellations. The album topped Messengers by reaching number 24 on the Billboard 200 and was nominated for the Dove Award for “Best Rock Album.”

In 2011, Matt Greiner met Kaleb Kilmer at church. That impromptu meeting planted the seeds for what would become Greiner&Kilmer Customs, a custom drum-building company based in Bainbridge, Penssylvania. Through his own company, Matt Greiner developed the design for his own signature snare drum. In 2012, Matt Greiner’s signature line of products expanded with the release of Truth’s Matt Greiner signature drum set.

Besides his musical endeavors, Matt Greiner is engaged in a couple religious projects of his own. Along with August Burns Red’s vocalist Jake Luhrs, Matt Greiner runs an online ministry called Heart Support. This is a non-profit organization built to encourage, inspire and bring a message of hope to the youth. Brick by Brick is an online tool Matt Greiner developed in partnership with Station 153’s drummer Tim Anderson to bridge the gap between fans and churches, and to work as a support network for Christian touring bands.

What Can We Learn From Matt Greiner?

As part of a new breed of heavy-metal drummers, Matt Greiner’s playing exudes technical proficiency, musicality and preciseness. In a time and age where speed is the thing heavy-metal drummers strive for the most, Matt Greiner’s drumming is a breath of fresh air in that it focus quite heavily in song groove and dynamics. The song “Composure” from Messengers is a fine example of that.

If you take a listen to the first verse of “Composure”, you’ll experience three different feels in just a matter of seconds. The first and most prevailing one is performed twice in the verse and is very unique. The snare drum is played on counts 1 and 3 instead of on the more usual 2 and 4, and the guitar riffs are complemented quite differently from what you’d expect from a heavy-metal song. You see, in heavy-metal music, drummers are prone to using the double pedal to double the rhythms of palm-muted guitar phrases. Matt Greiner expands on this concept by using a splash and different-sized chinas to double the guitar phrasing on counts 1 and 2, leaving the double pedal to cover the riff on count 3.

As for the other sections, they’re used to introduce different feels over the same rhythmic ideas played by his bandmates. It gives the verse a completely different feel, making it seem like the band is playing something completely different from before, when it’s not. This use of song dynamics and broken patterns on the cymbals brings a lot of depth and groove to this song. Matt Greiner’s playing in this tune is a fine example of how much dynamics one can infuse into very loud music by using orchestration and different rhythmic ideas.

“Mariana’s Trench” from Constellations features another great example of groove playing and quite effective use of dynamics. This can be found in the instrumental introduction, when Matt Greiner plays a heavy ghost-noted groove in 5/4 odd-time signature. This also shows another cool facet of Matt Greiner’s playing, a plentiful use of odd-time signatures in a variety of unique ways.

The intro drum part from “Divisions,” a song from the album Leveler, is an incredible showing of Matt Greiner’s ability to play extremely creative and musical parts in odd-time signatures. That section of the song is in 15/16 odd-time signature, and it was written specifically to complement the guitar riff. Not only did Matt Greiner succeed in creating an adequate part, but also in coming up with something extremely creative using almost every drum and cymbal on his drum set.

Matt Greiner’s drumming is very inspiring as a whole. He’s extremely precise but most important of all, very creative and groovy. Like any other drummer, Matt Greiner has a slew of drummers who have inspired him to get where to he is right now. Guys like Blake Richardson, Joe Walmer, Aaron Spears, Vinnie Colaiuta and Clyde Lucas, are just a few of those drummers.