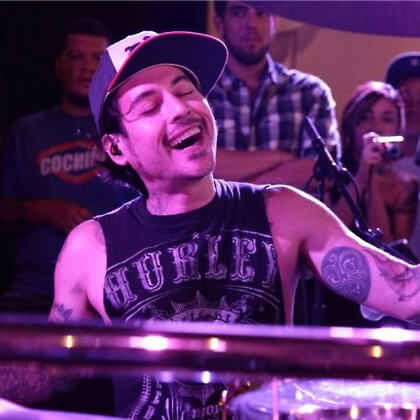 Who Is Jose Pasillas?

Jose Pasillas is an American drummer whose love for music won him a place among the best drummers today. Jose, a drummer for the alternate rock band Incubus, neither had a chance to go to a music school nor get an instructor to give him formal education in drums. But through the hardship, his undying determination has seen him through.

Jose was born Jose Pasillas II on April 26, 1976 in Calabasas, California. His family is originally from Mexico, but are settled in the United States. He is the son of Jose Pasillas I. Jose loved drums since when he a little boy. He started playing air drums when he was 12 years old and by 14, he was a good drummer on regular kits. Jose confesses the fact that in the entire period of nine years of playing drums he never had any formal training!

Jose learnt his drumming techniques by listening and learning the skills of his favorite drummers who includes Stewart Coperland, Tim Alexander and Chad Sexton. He has always maintained the habit of listening to and appreciating his favorite music since he believes that is the best way for one to perfect skill. Jose has mastered many techniques from various artists and has amalgamated all these to make him top class drummer he is today.

Jose first met his Incubus band mates while in school. The school was located in the San Fernando Valley near Calabasas. The first of his mates he got to know was Brandon Boyd, who he first met when they were in 4th grade. Brandon became Jose’s best friend and the two spent a lot of time together playing commando games in the near by bushes. Two years later, they met Mike Einziger who shared with them his hobby, skating. The three friends later linked up with Dirk Lance through Mike when they were in senior high school. This gang of friends had each learnt how to play instruments and so they spent time together experimenting on various melodies, and trying songs from notable bands like Metallica and Megadeth.

Jose, Mike and Dirk were more passionate about heavy metal bands. The trio found chances to perform at a few parties and Brandon later joined them. In 1998, Killmore joined the group and this was the beginning of what came to be called the Incubus. In 2003, Dirk Lance left the band and later his place was taken by Ben Kenney, a former bassist with another band, The Roots.

Incubus has been performing and realizing albums for over a decade. The members have grown together, learning from their mistakes and working hard to reach their goals. They have so far released eight studio albums, which include Fungus Amongus, Enjoy Incubus, S.C.I.E.N.C.E., Make Yourself, When Incubus Attacks Volume 1, Morning View, A Crow Left of the Murder…, and Light Grenades. A number of their hits singles have increased the group’s pool of fans world wide. Some of their unforgettable songs are ‘Take me to Your Leader’ from their 1996 album Fungus Amongus; ‘A Certain Shade of Green’ from the album S.C.I.E.N.C.E ; ‘Warning’, from Morning View; ‘Make a Move’ which was a sound track of the Sony hit movie, Stealth. The Band has been touring many parts of the world and their fans have been increasing each day. They are scheduled to be a top group at the Sound Wave Festival in Australia in 2008.