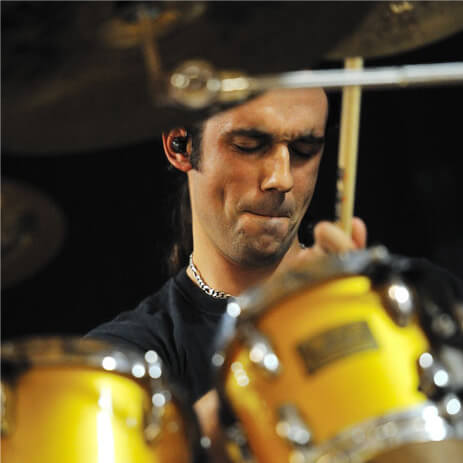 Who Is George Kollias?

Since the inception of the first heavy-metal bands in the late 1960s, heavy-metal drummers’ need for speed has stretched the boundaries of the style far beyond what was thought possible. However, no matter the speed they play at, the quench for faster chops never dies out. It’s because of drummers like George Kollias that the bar keeps getting raised higher. Whoever thought a heavy-metal guitarist would be such a driving force and influence in the whole heavy-metal drumming scene?! Yes, you read it right: a guitarist.

Although their family had no relationship with music, Georgios “George” Kollias’ and his older brother Iraklis Kollias’s interest in heavy-metal began at an early age. The excitement for heavy-metal music drove them to pick up an instrument so they could learn to play the style of music they had so much love for.

“I wanted to play metal in any possible way. I always felt I had it and I wanted to do it—always for my own joy, not professional. It went well. Me and my brother were learning guitar and that was one of the greatest things I have done because now I see how useful it is for my music. We still have that guitar. It’s a white Explorer by Epiphone; always sounded really good.” – George Kollias in “George Kollias” by Sean Mitchell, The Black Page Online Magazine, March, 2010.

“I was already playing for about 2 years on anything could make sound. I use to have a “custom” drum kit from buckets and other goodies which was sounding pretty good I would say, I made my first pair of sticks myself too! I got really young into rock/metal music, I remember myself sitting in our living room and listening to ACDC, Iron Maiden, Metallica etc all day long and tapping along the beat.” – George Kollias in “George Kollias Interview”, Sick Drummer Magazine Website, August, 2006.

George Kollias got his hands on a drum set two years later. Since he was only interested in playing hard rock and heavy-metal, George Kollias got a second bass drum to go along with his brand new five-piece kit. Drummers like Lars Ulrich, Igor Cavalera, and Pete Sandoval were the main inspirations behind George Kollias’ desire to play drums and to do so at high tempos.

Right from the get-go George Kollias sought the help of a drum teacher. Unfortunately, there weren’t any in the city he lived in. Vassilis Mpaxevanakis, a great Greek guitarist, was the best next guy he was able to find. Although he taught guitar, he decided to teach George Kollias how to play drums at the music school he worked on. Vassilis Mpaxevanakis was pretty knowledgeable about drums and music theory. For a whole year he guided George Kollias the best he could and taught him a lot about music theory.

After playing for only three months, George Kollias got the opportunity to perform in front of an audience. The show took place at his brother’s high-school. George Kollias was the youngest musician in the band–everybody else was four years older. They played songs from heavy-metal bands for a crowd that wasn’t that into the style. However, they were still able to get the audience into the show. Afterwards, they kept performing as a cover band, which enabled George Kollias to play very cool shows while covering music from his favorite bands.

In the meantime, George Kollias was also playing for his school’s band. The band performed at national celebrations only, and each drummer was allowed to take a snare drum home so they could practice.

“(…) For me it was a good opportunity to get there and make some noise. Each one of us was allowed to take the snare home for practice so I did just to add a tom on my kit, those snares were great “toms”, ha ha…” – George Kollias in “George Kollias Interview”, Sick Drummer Magazine Website, August, 2006.

For the following years, George Kollias focused all his efforts into heavy-metal and drumming. He practiced like a maniac and played with as many bands as he could. Although most projects didn’t led him anywhere, George Kollias acquired a lot of experience as a live and studio drummer. He eventually got to record two demos with the band he had with his brother, Extremity Obsession, where besides playing drums he also sang and wrote lyrics. The demos were called Extremity Obsession (1996) and Everlasting (1997).

“When I first joined his class I was already on a good playing level (…) and I had already started getting into technical metal and bands (…) Even though I was able to pull off the songs I felt I was missing the next level. I needed more information and concepts in order to play everything I wanted (…) and also get more influence from other styles so I could start building my personal style. Yannis definitely did that to me; he got me into jazz drumming and made me open my ears to different styles. He made me think as a teacher and train myself and that was the best thing I got.” – George Kollias in “George Kollias” by Sean Mitchell, The Black Page Online Magazine, March, 2010.

In 2000, the quench for a vibrant music scene forced a 23-year-old George Kollias to move to Athens, Greece’s capital city. This move proved to be the best George Kollias could have ever made.

In the aftermath of his move to Athens, George Kollias joined the heavy-metal band Nightfall. He stayed with them for five years, played on huge music festivals like Wacken Open Air, Germany and Rockwave Festival, Greece and recorded two full-length albums: I Am Jesus (2003) and Lyssa/ Rural Gods and Astonish Punishments (2005).

While working with Nightfall, George Kollias formed the extreme death-metal band Sickening Horror and began working as a hired gun, but only for those projects he felt some connection to. He recorded a promo CD with Sickening Horror in 2003 and their debut album, When Landscapes Bled Backwards, in 2007. Working as a session musician enabled George Kollias to acquire a lot of experience in a studio setting and with different styles of music.

In 2004, and after Tony Laureano decided to quit Nile, the remaining members called Derek Roddy to see if he knew of anybody who’d be a suitable choice to take on drum duties. Derek Roddy sent them some videos of George Kollias and advised them to get in touch with him. They did, and in August, 2004 George Kollias joined Nile.

“(…) then Karl (Karl Sanders, Nile’s vocalist/guitarist) got in touch and asked me to join Nile. I was pretty excited of course, but I did a lot of thinking before I said yes, just to make sure that the band could count on me. Joining a band is not that simple; there are lots of tours and obligations that you have to commit to do.” – George Kollias in “George Kollias” by Sean Mitchell, The Black Page Online Magazine, March, 2010.

After joining Nile as a full-time member, George Kollias flew to the United States to get busy writing what would come to be Annihilation of the Wicked (2005). Since then, George Kollias has toured the world and recorded three more albums with Nile: Ithyphallic (2007), Those Whom the Gods Detest (2009) and At the Gate of Sethu (2012). In the spring of 2007, and right after recording Ithyphallic, Nile joined the Ozzfest tour as the first extreme-metal band to ever perform on such prestigious stage.

Joining Nile exposed George Kollias to a much broader heavy-metal audience, which catapulted his personal drumming career. He’s a mainstay in the drum clinic circuit, educating the world about heavy-metal drumming and the techniques and methods he uses to play with the precision, endurance, and speed he’s known for.

If all those projects weren’t enough, George Kollias has been working on his own music. Songs like “Aeons of Burning Galaxies” and “Shall Rise-Shall Be Dead” have seen the light of day and received a great amount of praise. George Kollias still finds time to do some recording sessions. The most prominent ones were those for Cerebrum’s Spectral Extravagance (2009) and Deus Infestus’ Swansongs For This Stillborn Race (2010).

What Can We Learn From George Kollias?

Mastering any music style requires an enormous amount of dedication and passion. Many drummers find so much satisfaction from a single style of music that they focus their entire being on it. However cool you may feel about this, it brings about a problem: it’s hard to innovate within something if you never venture out of it. We’ll drive our point home by taking a look at an example.

Let’s say that you’ve studied physics your entire life. By doing so you’ve probably become very good at it. Now, if besides physics you’ve also studied computer science, you’ll be able to work on 3D modeling and animation by applying your knowledge of physics to computer science. In the same way, if you listen and study different styles of music, even if only for scratching their surfaces, you’ll be able to take a lot of new ideas into the style you like the most. This one of the approaches you can follow to innovate and be creative.

With that being said, you might not be able to use all your new knowledge in your music of preference, or will have to, at least, make some small changes. Nonetheless, you’ll always become a way better and creative musician in the process.

“There are always ways to be more creative (…). Hell, I see jazz drummers blasting some times, and I think it’s way cool! (…) There are no limits on what to play, but there are –a few- limits on what to play in a band. You can’t play Nile songs as a pop drummer or blasting in pop songs, but going through these 2 worlds and experiment will definitely give you weapons to get better as a musician in general.” – George Kollias in “George Kollias – Exclusive OnlineDrummer.com Interview” by Frank Bender, OnlineDrummer.com, June, 2009.

George Kollias loves the speed aspect of heavy-metal drumming; it’s one of the things that first drew him to the style. However, to achieve the type of control and speed George Kollias is know for, one has to understand that foot technique varies with speed, in order to keep you going while maintaining you balanced and relaxed. There are basically three different techniques: at slow tempos leg motion; at medium to high tempos a mix between leg and ankle motion; at fast tempos ankle motion. As tempo increases your motions have to be subdued accordingly.

Now, George Kollias believes the secret for achieving control and balance at slow, moderate, and high speeds is to play combinations of the three motions described previously while going through different tempos. A good way to go about this is representing each motion by a note value: for instance, 8th notes for leg motion, 16th notes for the leg/ankle combination, and 32nd notes for ankle movement. Combine these three note values into exercises. Start at a slow tempo and work your way up. You’ll be blazing at fast tempos in no time. For more tips for developing double-bass speed, control, and endurance, check this free drum lesson.