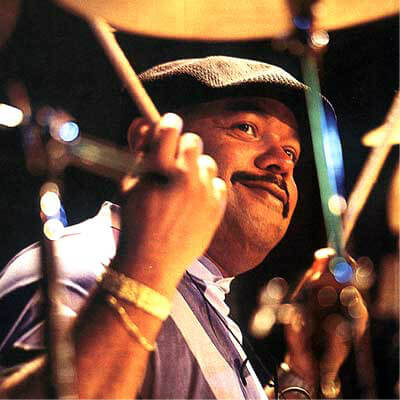 Who Is Dennis Chambers?

Talented is an adjective that’s tossed around undeservedly quite often. However, when you’re gigging since the age of six and are coveted by some of the greatest names of funk music since the age of 13, it’s extremely hard not to do so. In the case of Dennis Chambers you can toss it around candidly but only if you add extremely before it.

Exposed to the music of James Brown since a very young age, Milton “Dennis” Chambers quickly found himself interested in music making. This desire of his was further nurtured by his mother, Audrey Chambers, a former Motown backup singer.

Two years after giving birth to Dennis Chambers, Audrey left Motown and formed her own band in the Baltimore/ Washington area. With rehearsals taking place at his parent’s apartment and grandmother’s house, it was impossible for Dennis Chambers not to be sucked in into the wonderful and colorful world of music. It was on one of those rehearsals, while the band was playing Mary Wells’ “My Guy,” that his interest for drumming was born.

“I saw her drummer playing, it caught my ear, so I just started picking up knives and forks. I really liked what the drummer was doing; I liked the motions. So I started playing.” – Dennis Chambers in “Dennis Chambers” by Robin Tolleson, Modern Drummer Magazine, May, 1989.

Seeing Dennis Chambers was into destroying furniture with knifes and forks, his parents decided to give him a small Sears drum kit. Dennis Chambers didn’t quite know what to do with the drum set, so the end result was a wall of noise. Of course, this drove Audrey crazy. To help her cope with Dennis Chambers’ “practice” sessions she’d put on some jazz albums. “Take Five” by The Dave Brubeck Quartet, with Joe Morello on drums, was one of those records and the first one that caught Dennis Chambers’ attention.

“That really caught my ear. It sounded so simple, and then all of a sudden here comes this solo, and this guy’s playing all this stuff. I didn’t know what the hell it was, but it just made sense. So I would try to emulate it, and from there I just went right into listening to Art Blakey, Max Roach, Philly Joe Jones, Papa Jo Jones, and Elvin.” – Dennis Chambers in “Dennis Chambers” by Robin Tolleson, Modern Drummer Magazine, May, 1989.

Without any formal training, Dennis Chambers began honing his skills by playing along to funk, soul, and jazz records. Some of his favorite artists to play along to were James Brown, Otis Redding, Sam & Dave, Isaac Hayes, The Bar-Kays, and Miles Davis. With an increasingly greater interest in drumming and prowess on the instrument, Dennis Chambers’ parents gave him his first real drum set shorty thereafter. It was a small, used drum set that they’d pick up from a music store and that Dennis Chambers used until he was 12 years old.

Two years after he’d start playing drum set, Dennis Chambers graced a stage for the first time in his life. It was with a top-40 band called The Fingertips and the gig was at the Peyton Place, Baltimore. In the 1960s a top-40 band was actually extremely eclectic. Dennis Chambers had to cover music from all types of genres, especially funk, soul, jazz, and big-band. Between live gigs and intensive practicing, Dennis Chambers was acquiring all the chops and feel that would enable him to become one of the best drummers to ever set foot on our planet. Did we say he practiced a lot?!

“I was always practicing. I would get up in the summertime and hop right on the drumkit until about sundown. My mother would make me take a lunch break, and then I was always playing, always banging.” – Dennis Chambers in “Dennis Chambers” by Robin Tolleson, Modern Drummer Magazine, May, 1989.

Dennis Chambers first big break came at the age of 13. After playing James Brown cover tunes at James Brown Motor Inn in downtown Baltimore, he was asked to join James Brown as his drummer.

“So I go over to the table (…) ‘Hey kid, you sound great. How old are you?’ ‘Thirteen.’ ‘Wow, that’s fantastic. That’s great. What do you think about, you know, would you like to play with me? Play in my band?’ ‘Hell yeah’ – that’s what I was thinking to myself. ‘Yeah, but I’m thinking about school – how would that work out? I may have a problem with my mom. She might not want me to go…’ And I gave him the phone number to the house to talk to my mother, or have his manager talk to my mother.” – Dennis Chambers in an Interview to Larry Alexander, 1997.

After hearing that James Brown wasn’t interested in getting Dennis Chambers a tutor so he could keep studying while on the road, Audrey refused letting her son go. Just like that, Dennis Chamber’s first big break went up in smoke. Fortunately it wasn’t the last one–far from it.

After getting into high school, Dennis Chambers had his first experience with formal music education by joining its school band. The music teacher was Charles Anderson, a snare drummer with a great set of hands. He really got Dennis Chambers into drum rudiments other than the single stroke roll and the double stroke roll, through John S. Pratt’s 14 Contest Solos For Snare Drum (1959).

Other artists Dennis Chambers has worked with throughout the years, include Billy Sheehan, Bob Berg, Herbie Hancock, Maceo Parker, Steely Dan, Tom Coster, and Victor Wooten. For more details on Dennis Chambers’ discography and videography, click on this link.

One of Dennis Chambers’ greatest gigs came in 2002 when he was hired to record drums for Santana’s Shaman. During the recording sessions he was informed that Carlos Santana wanted him to join his band as a full-time member. Since then, Dennis Chambers has toured the world with Carlos Santana and played drums for All That I Am (2005), Guitar Heaven: The Greatest Guitar Classics of All Time (2010) and Shape Shifter (2012).

Dennis Chambers has also taken a stab at the world of drumming education. In The Pocket (1992), Serious Moves (1992), Common Ground (1999) and Master Drummer (2007) are the educational products released so far that you can use to learn more about his drumming.

What Can We Learn From Dennis Chambers?

Dennis Chambers is mostly known for his ability to perform with impeccable and funky timing in whatever style he’s called upon to play and for his incredible and fast chops. However, today we’re going to focus almost all of our attention on some of his practice routines.

Probably one of his most famous practice methods is using a pillow for improving his hand technique. Pillow practice is a method guys like Buddy Rich, Billy Cobham and Dennis Chambers made famous because of the way it developed their chops.

Unlike a practice pad a pillow lacks rebound. Without the aid of the surface you’re throwing your sticks at, you’ll have to do all the work for each stroke. When practicing on a pad the rebound of the surface is what’s responsible for throwing your sticks back at you. The only thing you have to worry about is receiving the stick at whatever height you need to in order to play the next stroke with the dynamic volume you desire.

Without rebound you have to use your arm to move the stick all the way to the height you’re playing it from next. This type of effort will have you using your forearms a lot more than with a pad. This is awesome because you’ll be exercising the main motors behind your writs. As your practice using this method, you’ll start feeling somewhat of a burning sensation in your forearms. That means your muscles are tearing. However grim that may sound, it’s actually a very good sign. Once your muscles tear, they’ll actually grow back but a lot stronger, which will enable you to play with speed.

Besides speed building, practicing on a surface without rebound is great for improving your playing once you get to the toms on an acoustic drum set. Their surfaces lack rebound, so if you build your forearms in a way that enables you to play with great speed on a pillow, you’ll have no problems performing like so on toms.

Another chop-building and control exercise Dennis Chambers is know for is practicing foot technique without a spring attached to the bass-drum pedal. Dennis Chambers learned this technique from Buddy Rich who told him it’s a great way to understand how pedals work and how to control them effectively.

Without a spring attached to the pedal, you’ll have to rely on the drumhead for the beater to come back to the starting position. This poses an incredible challenge because you’ll have to play your pedal in a way that keeps the beater from being buried on the skin, otherwise you won0t be able to play more strokes.

This is an incredible exercise for improving your bass drum control, whether you play heel-up or heel-down. Check the free drum lesson “Beginner Single Pedal Bass Drum Speed” for some exercises that you can use to practice with Dennis Chambers method.