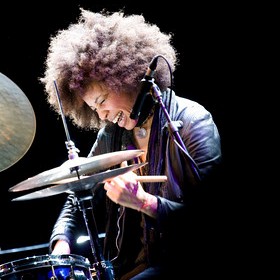 Who Is Cindy Blackman?

Cindy Blackman was born in Yellow Springs, Ohio to a very musical family. Cindy Blackman’s mother and grandmother were both classically trained musicians, playing violin in classical orchestras and piano, respectively. Cindy Blackman’s uncle played vibraphone, her father was a jazz buff, his older sister was really into Jimi Hendrix, The Beatles, Sly and the Family Stone, and James Brown, and his older brother was a big fan of John Coltrane’s music.

Cindy Blackman’s interest in drumming began at a very young age. Whenever she heard music, live or on records, drums were always the instruments that stuck out to her the most. Cindy Blackman loved rhythm and the role a drummer played in the music. At the age of 7, Cindy Blackman had her first experience with a drum set while attending a pool party at a friend’s house in Yellow Springs. While making her way to the host’s house bathroom, Cindy Blackman stumbled upon a drum set.

“Just looking at them struck something in my core, and it was completely right from the second I saw them. And then, when I hit them, it was like, wow, that’s me. That’s completely natural for me. It’s like breathing for me. It didn’t feel awkward at all.” – Interview to Glenwood Spring’s Post Independent, July 16, 2008.

Upon hearing of Cindy Blackman’s new found passion for drums, her mother thought she would grow out of it eventually. However, she didn’t. Cindy Blackman immediately began playing in the school band and was able to convince her parents to buy a drum set she could call her own. It was a toy drum set so it didn’t last long.

When Cindy Blackman was 11 years old she moved with her family to Bristol, Connecticut. There, Cindy Blackman joined the junior high concert and jazz bands. She was part of the percussion section whenever the band did plays and performances, and was also given the opportunity to play timpani and lead snare drum in the school orchestra. Cindy Blackman even attended a summer session at the Hartt College of Music, Hartford, and visited Jackie and Dollie Mclean’s Artists Collective. Cindy Blackman’s love for drumming led her to a local fife and drum corps, where she enlisted her services at the age of 12 and learned how to play the drum rudiments accurately.

“We used to take each rudiment and start playing it as slowly as we possibly could, then we’d speed it up, still keeping the sticks the same distance and height from the drum. When we got to top speed, we’d slow it back down, still keeping the sticks even – a very difficult task for a kid. It meant that I had to get my hands together really early, though, and it was a great opportunity. I may only have been twelve at the time, but I still draw on that experience today.”

After realizing what could be gained from being taught privately by a good and experienced drum teacher, Cindy Blackman begged her parents for some drum lessons. Soon after, her wishes were acknowledged and she began taking her first drum lessons. Cindy Blackman was around 13 years old when a friend of hers changed her musical life forever, by introducing her to the drumming of Max Roach. At the time, Cindy Blackman was more of a pop/rock drummer. Learning about jazz, Max Roach and what he was accomplishing on the drum set with 4-way independence, really intrigued her because of the challenge that was involved in it.

“The first time that I focused on a particular drummer was when a family friend – a drummer himself – turned me on to Max Roach. He took a passage that Max had played on a certain record and he wrote it out on paper for me. He explained what Max was playing with his right hand, his left hand and his feet (…) I realized that there was a lot more to it than I’d thought and I began to have more respect for players like Max Roach and Elvin Jones. Then I started listening to Art Blakey and Philly Joe Jones.”

Seeing her interest in drumming grow, and after going through several toy drum sets, Cindy Blackman’s parents decided to give her a student model drum set at the age of 13. Prior to that, Cindy Blackman’s only experiences with a real drum set were at her boyfriend’s house, where they’d take turns playing along to records.

“Tony was incredible. His technique was blistering. The sound of his drums was amazing. His musicality with all that technique was mind boggling, and his intelligence on top of that was incredible. I had heard him on record and was extremely impressed and excited by what I had heard. That’s why I went to hear him.” – Interview to DRUM! Magazine, December Issue, 1999.

Cindy Blackman ended up relocating to Boston, Massachusetts where she studied for three semesters at the Berklee College of Music. There, Cindy Blackman worked primarily under the supervision of Lenny Nelson, transcribing and playing drum parts from records. Cindy Blackman also took that opportunity to take private drum lesson from Tony Williams‘ former drum teacher, the legendary Alan Dawson.

“It was not that I left school in order to be a street performer, but I just wanted to move to New York. I played in different clubs and places but I did not have a main gig (…) I met these guys who were playing on the street, they asked me to play (drums) and I said ‘of course’. Then I loved it because every day you play from noon to midnight, sometimes even to 7 a.m.” – Interview to Today’s Zaman, November 27, 2007.

“I went to L.A. and ended up auditioning with thirty other people. I packed for two days and ended up staying for two weeks. At the end of those two weeks we did ‘Are You Going To Go My Way’ and I shot my first video with Lenny. He asked me to join the band, I said yes and asked when I started. He just turned round and said, ‘You already have…’ ”.

Cindy Blackman has recorded 9 studio albums as a band-leader: Arcane (1988), Code Red (1990), Telepathy (1992), The Oracle (1995), In The Now (1998), Works On Canvas (1999), Someday (2001), Music For The New Millennium (2005), and Another Lifetime (2010). Besides her personal musical endeavors, Cindy Blackman has been part of Lenny Kravitz’s supporting band since 1993, the year she recorded drums for Are You Gonna Go My Way. It was Lenny Kravitz’s first album to achieve worldwide success, selling over 4 million copies worldwide. Cindy Blackman was a member of Carlos Santana’s touring band in 2010 as well, filling in briefly for Dennis Chambers.

In 1998, Warner Brothers publications released Cindy Blackman’s first drumming instructional video entitled, Multiplicity. In 2001, Cindy Blackman was one of the many drummers that played on the Modern Drummer Festival. Cindy Blackman has also worked on signature products with the companies she endorses. Istanbul Cymbals released the “Cindy Blackman OM Series”, a collection of cymbals designed especially to capture the sound of the golden era of jazz drumming. With Vic Firth, Cindy Blackman has helped develop her line of signature drumsticks as well.

Getting to know and befriend guys like Art Blakey and Tony Williams were among the greatest highlights of Cindy Blackman’s career.

“I was introduced to Art Blakey, who befriended me. Meeting him was just amazing – he started calling me his daughter, and even his children acknowledged me as part of the family! (…) I got to meet so many people – Elvin Jones, Billy Higgins and Tony Williams. Meeting Tony was the best thing that has ever happened to me.”

What Can We Learn From Cindy Blackman?

The fife and drum corps Cindy Blackman was a part of was substantial in helping her develop great facility with her hands while playing traditional grip. This was the direct result of how she and her colleagues were taught by the drum corps master. While using drum rudiments as basic exercises for developing technique, the drum corps master instructed the students to go from slow to fast while keeping the same stick-height and dynamic value happening. This was done from the softest to the loudest of strokes. This equipped Cindy Blackman with the ability to play loud, soft, and all the dynamic levels in between at various speeds with confidence, control, and accuracy.

This is a great idea that you can apply to your practice regime as well. Instead of practicing drum rudiments and warm-ups at a single dynamic level, play them with different volumes. Being able to play them at any dynamic level, regardless of the speed at what you’re playing is crucial in attaining mastery over you hands. No matter the style of music you play, this is a very important concept. Playing with dynamics is crucial if you want to be a musical drummer. Besides dynamics, Cindy Blackman feels that there’s a lot that one can do to be as musical as possible.

“Playing in the moment and not just playing what you practice in a drum room is one key. Learning harmony, or at least root motion, melody and phrasing is another. Listening and reacting to the music and soloists, and not just playing back every lick you hear them playing is a very important key as well. Playing with dynamics, intellect and heart are yet other very important elements.” – Interview to AbstractLogix.com, April, 2010.

Cindy Blackman’s love for Tony Williams’ drumming has fueled her playing throughout the years with endless inspiration and ideas. Tony Williams’ drumming concepts vastly permeates Cindy Blackman’s whole approach to the drum set. A great example of that is the drum solo from the song “40 Years Of Innovation” taken from the album Another Lifetime, an album devoted to the memory of Tony Williams, his music and his playing. The tune features traits of Tony Williams’ playing with the single stroke roll crescendo and decrescendo, the flammed triplets played around the drums, and the fast consecutive strokes played on the bass drum with a single bass drum pedal.

Although she was highly influenced by Tony Williams’ approach to the drum set, Cindy Blackman was still able to find a voice of her own on the instrument. Getting inspired by other drummers, using their concepts and licks as a starting point to your own studies on this beautiful instrument won’t be detrimental to the development of your own style. It will only be detrimental if learning those concepts and licks are your main objective, and not means to an end. Expanding on them and elaborating new ideas and concepts through them is what will set you apart from those who inspire you, those who came before you. This is what will have you working on your own voice. So whenever you learn anything from your favorite drummers be creative with it afterwards.

The drum set is a very demanding and physical musical instrument. As we grow older we may start losing some of our abilities if we’re not careful with ourselves. Being well aware of this, Cindy Blackman takes care of herself by keeping her body in top physical shape by practicing yoga and karate, and by eating healthily.

“I eat completely organic, take a lot of sea minerals, try to eat natural foods. I eat nothing out of a can, I don’t drink soda and I usually juice my own juices. When I see my peers we talk about different things and I know it pays off.” – Interview to TheStar.com, June 7, 2008.

Taking care of yourself, eating properly and exercising regularly will not only safeguard your drumming abilities, but also guaranty that you’ll be drumming for years to come. Living healthily can actually expand the number of years you live with quality. This means you’ll be able to spend more years drumming and having fun. Think about this the next time you put your hands around a beer and a greasy burger.