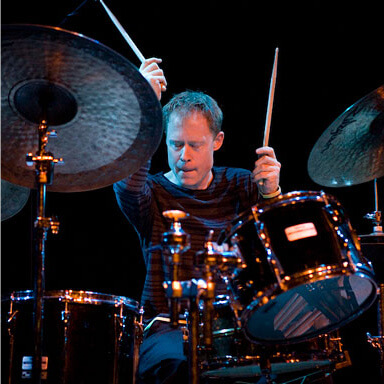 Who Is Bill Stewart?

William Harris “Bill” Stewart was born on October 18, 1966 in Des Moines, Iowa. Bill Stewart’s father was a trombonist and a big fan of Bill Harris, an acclaimed jazz trombonist from the 1940s and 1950s jazz scene. His love for Bill Harris’ work was such that he named Bill Stewart after him, as a tribute.

Bill Stewart’s first exposure to music came from listening to his parents’ collection of jazz and rhythm and blues (R&B) records. Listening to records was the most effective way of getting exposed to different styles of music, since Iowa was a relatively isolated state. Live jazz concerts, for instance, were very rare in that area of the United States.

Bill Stewart began playing drums at the age of 7. He taught himself how to play drums by playing along to records at his house. Therefore, Bill Stewart didn’t get the most traditional of drumming educations in jazz. In fact, Bill Stewart learned jazz drumming using matched grip, a grip that’s mostly associated with rock drumming and the one he prefers using till this day. Drum lessons, drum books, and drum rudiments was something he would get into later on.

Bill Stewart continued developing his drumming skills in high school by performing in its orchestra and in a top 40 cover band. He also furthered his studies in jazz by going to the Stanford Jazz Workshop in California, a summer music camp where he was lucky enough to meet jazz legend Dizzy Gillespie.

After successfully graduating from high school, Bill Stewart enrolled at the University of Northern Iowa in Cedar Falls, Iowa. There, Bill Stewart played in the orchestra and in the jazz and marching bands. Bill Stewart wound up transferring to the William Paterson University in New Jersey, where he enrolled in its Jazz Studies and Performance program. During his stint there, Bill Stewart performed in ensembles directed by Rufus Reid, took composition lessons from Dave Samuels, and studied drums under Eliot Zigmund and Horacee Arnold. John Riley and Ed Blackwell – legendary jazz drummers – gave him some drum lessons in college as well, when subbing for Eliot Zigmund. Joe Lovano was another musician that subbed for Eliot Zigmund. He would latter join Bill Stewart in many of his musical endeavors.

“I didn’t really study with Joe Lovano except that he subbed for my drum teacher Eliot Zigmund at WPC one day when he couldn’t teach his drum lessons. So, all of Eliot’s students got a lesson with Joe. In my case, it consisted of us playing duets for an hour. Joe made a comment or two and that was all the talking.” – Interview To AllAboutJazz.com, May, 2002.

Bill Stewart made his recording debut in 1987, while still in college, by contributing drums for Scott Kreitzer’s Kick’n Off. However, the album would only see the light of day in 1992. After graduating in 1988, Bill Stewart moved to Brooklyn, New York. He began establishing his reputation as a musician by appearing regularly at jam sessions that took place in New York. Word of mouth and his constant performances at jazz clubs helped him secure his first gigs, which were with pianist Larry Goldings and guitarist Peter Bernstein. At one of their regular concerts at Augie’s Club in Manhattan, Bill Stewart was invited by former James Brown and Parliament-Funkadelic saxophonist Maceo Parker, who was at attendance, to take part in the recording sessions for his album Roots Revisited (1991).

Shortly thereafter, Bill Stewart was invited to join John Scofield’s quartet, with saxophonist Joe Lovano and either Dennis Irwin or Marc Johnson on the double bass. This was one of Bill Stewart’s first regularly touring bands. After that band, Bill Stewart wound up performing for various other bands John Scofield put together.

Bill Stewart worked with Maceo Parker in 1990 and 1991. Besides playing live with Maceo’s band, Bill Stewart took part in the recording sessions for the albums Mo’roots and Life On Planet Groove, which were released in 1991 and 1992, respectively. Another very cool side-effect of being a regular member of Maceo Parker’s band was the opportunity to perform in an HBO special with James Brown, right after he got out of prison in 1991.

Bill Stewart took part in the recording sessions for 7 of John Scofield’s albums: Meant to Be (1991); What We Do (1993); I Can See Your House from Here (1994); Hand Jive (1994); Quiet (1996); EnRoute: The John Scofield Trio LIVE (2004) and This Meets That (2007). I Can See Your House from Here was a very special album for Bill Stewart, since he had the opportunity to work with two of the greatest guitarists of all time, John Scofield and Pat Metheny. Working with Pat Metheny and getting to know him led to future collaboration work. And so in 2000, Bill Stewart recorded drums for Pat Matheney’s Trio 99->00 and Trio->Live.

Around the same time Bill Stewart began working as a sideman for various projects, he kick started his own. In 1989 Bill Stewart released Think Before You Think, his first effort as a band leader. The album featured Dave Holland on bass, Marc Copland on piano, and Joe Lovano on saxophone. In 1995 and with the help of trumpeter Eddie Henderson, pianist Bill Carrothers, bassist Larry Grenadier, and Joe Lovano, Bill Stewart released Snide Remarks. The album was chosen as one of the top ten jazz album of 1995 by the New York Times. Telepathy (1997) was Bill Stewart’s next studio release. In 2005 and 2006 the Bill Stewart Trio, featuring Kevin Hays and Larry Goldings, released Keynote Speakers and Incandescence, respectively.

Bill Stewart helped develop his line of signature drumsticks and the “The K Custom Special Dry Complex” ride cymbal with Zildjian Cymbals. Bill Stewart performed at the Modern Drummer Festival in 1997 and 2008.

What Can We Learn From Bill Stewart?

Bill Stewart’s drumming is very melodic. A melody is a linear succession of musical tones that’s perceived as a single entity. Basically, a melody is a combination of pitch and rhythm. So melodic drum patterns are phrases that can be sang or hummed, much like guitar and piano licks. This is a very musical approach to drumming and one that coupled with Bill Stewart’s dynamic precision and limb-independence makes for very expressive and musical statements. This is quite noticeable in Bill Stewart’s playing when trading solos with other musicians. Bill Stewart tends to copy their phrasing to apply it to the drum set. He doesn’t limit himself to the drums, using various splash cymbals to color his melodic phrasing as well. Check out some of Bill Stewart’s performances in his video section to see what we mean.

Bill Stewart’s high level of limb-independence is another aspect of his drumming that enables the type of musical output he brings forth with every one of his performances. His feet can take part in the melodic playing as freely as his hands. But what strikes us the most is the way in which he uses his hi-hat foot. A good example of what Bill Stewart is capable of with his hi-hat foot is recorded in John Scofield’s song “Wee” from the album EnRoute: The John Scofield Trio LIVE. Around the 5:53 mark the bassist plays a phrase to which Bill responds with a very creative 8-bar solo. In the last 4 bars you can listen to the bass-line being mimicked by Bill Stewart’s hi-hat foot.

To work on his independence and melodic playing, Bill Stewart used exercises from the book Progressive Steps To Syncopation For The Modern Drummer and combined them with basic jazz patterns and with some dynamic drumming concepts. The patterns from that book are simple in nature. It’s when you combine them with other patterns that things get hard pretty fast. Using those types of simple phrases within his drumming and practice routines allowed for his musical persona to pop out. It’s easier to recognize and sing simple phrases amongst the paraphernalia of sounds in a song, than it is to do so with more complex patterns. Keep that in mind while developing your own ideas on the drum set, or your independence exercises. Simple ideas can take you far in expressing yourself or accompanying other musicians in a tasteful manner. It’s a great way of coming up with recognizable and melodic patterns for your solos as well.

Another aspect worth mentioning about Bill Stewart’s drumming is his amazing ability to play polyrhythms with ease. To study his use of polyrhythms listen to the songs “No Matter What” and “Toogs” from John Scofield’s I Can See Your House From Here and EnRoute: John Scofield Trio LIVE, respectively.