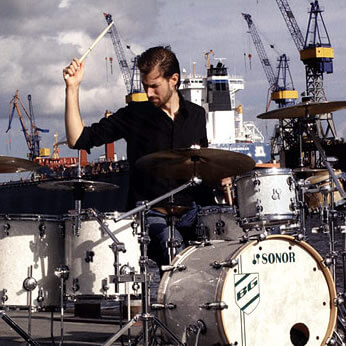 Check out the Benny Greb lesson on Drumeo »

Who Is Benny Greb?

Benny Greb gained worldwide exposure with his 2009 instructional DVD – The Language of Drumming. However, this Germany native from Augsburg is not new to drumming. Benny Greb’s journey in the world of percussion started at a very young age, he was only 6 years old.

His parents were not proficient with any musical instrument but were always very interested in music, making sure to take Benny Greb to a lot of concerts. His father listened to a lot of music from English artists like James Taylor, Queen, and the Beatles. His brother was a keyboard player and was into music from artists like Tower of Power, James Brown, and the Bee Gees. So from the get go Benny Greb was very influenced by his family as music fans.

There wasn’t a decisive reason or event that made Benny Greb choose the drum set over all other instruments. He took lessons for both trumpet and piano as a child, but always felt the drums as the most interesting instrument of them all. He was self taught until the age of 12, playing to records and messing around with different ideas. This was a very special time for him since he felt the drum set as his instrument, where he could play by his own rules.

He quickly progressed to playing in punk bands before discovering jazz and getting involved in the various bands that his school had to offer. In 1997 with 17 years old, Benny Greb began studying drums full time when he started attending the vocational school for music in “Dinkelsbühl”, Germany, where he grew a lot as a player, mainly due to the methods followed by Udo Dahmen, his drum teacher. He also completed the program of study for popular music at the “University College for Music and Theater of Hamburg” in Germany, where he teaches since 2002. It was around this time (1997 onwards) that Benny Greb started developing the concepts that would later be part of his educational DVD – The Language of Drumming.

Besides being admitted as an instructor at the “University College for Music and Theater in Hamburg”, Germany, Benny Greb also teaches at the “Popakademie” in Mannheim, Germany, from time to time. He is also one of the founding members of the band camp for the “Bavarian Music Academy of Hammelburg”, Germany.

Since 2002 he has performed at the “World Drum Festival” in Germany, the “Montreal Drum Festival” in Canada, the “Ultimate Drummer Weekend” in Melbourne, Australia, “Drummer Live” in London, England, the prestigious “PASIC” event in Texas, and has also headlined the Hungarian “Percussion Gala” and the 2010 “Modern Drummer Festival”. You can also get a glimpse of his playing by attending one of his very entertaining and educational worldwide clinics for Sonor Drums and Meinl Cymbals.

Benny Greb is a very versatile player. You can listen to him playing in rock settings with bands like “Stoppok” and “The Ron Spielman Trio”, jazz with the “Benny Greb Brass Band” and “Sabri Tulug Tirpan”, funk with “Jerobeam”, classical music with the “Northern German Radio (NDR) Symphony Orchestra” on their Zappa project, fusion with “3ergezimmer”, acoustic punk/cabaret with “Strom & Wasser”, and Greb has also played reggae with the great jazz/reggae artist Bobby McFerrin. One of his latest projects put him on stage with Christin Von Richthofenon on a live show called “Auto Auto!” where they featured a car as a percussion instrument.

In 2003 his first performance/ instructional DVD – Vorschlag (Proposal) – was launched in Germany. It would take 6 years for a new Benny Greb DVD to see the light of day, in the form of the dual DVD – The Language of Drumming, A System For Musical Expression. In 2010 Benny Greb’s repertoire of music education products got a further boost with the launch of the “Benny Greb drumtrainer” iPhone app, and with the 2010 “Modern Drummer Festival” DVD, where you can watch his drum clinic and live performance.

What Can We Learn From Benny Greb?

When Benny Greb was just starting out on the drums, his mother took him to a local drum teacher for signing him up for lessons. The teacher told them both that for the first 4 years Benny Greb would only play snare drum. At the sight of being stripped away of the joy of learning and playing drums, it was obvious to Benny Greb that he had to follow another route. Believe it or not, this is the most important thing we can learn from him. No ego trips, no desires to be the best or have the best chops on the planet, he just wanted to express himself and have fun in doing so with a drum set.

For Benny Greb, music and playing comes way first than learning technique. Technique should only be a tool for aiding us in creating music. There is no point in learning technique just for the sake of it. He has incredible chops nonetheless, but he always spent more time focusing on his pocket, independence, feel, and rhythmic knowledge, than on technique. This is what has made him a vicious pocket player. He has an awesome feel and musicality, and is one of the top groove players of our planet today. He has never shined away from learning and listening to new styles of music, which further helped him gain a vast knowledge of groove and feel, and ultimately to play with a lot of different artists, and in different musical situations.

Benny Greb states that some of his most frustrating moments behind a drum set came from not being able to play what he was hearing inside his head. That pursuit of expressiveness utterly lead to a greater level of enjoyment, and creativity. Benny Greb is always looking for new ways to create different sounds on the drums. Whether it means playing on the resonant side of a snare drum, using the snare wires as just another instruments, or by using his hands around the whole drum set; the sky is the limit for him.