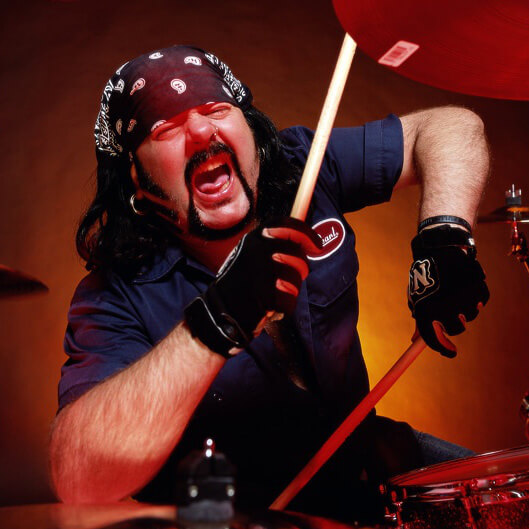 Who Is Vinnie Paul?

Vincent “Vinnie” Paul Abbott was born to Carolyn and Jerry Abbott, a country music songwriter and record producer, in Abilene, Texas in 1964. Music played a huge role in Vinnie Paul’s development as he was growing up. Jerry Abbot’s affair with music was influential in getting Vinnie Paul to play an instrument.

When Vinnie Paul was just a small kid his father enrolled him in the school band. The band director had the job of assigning instruments to the students. Curiously enough, he didn’t see in Vinnie Paul a potential percussionist. So, Vinnie Paul was sent home with a tuba, which he was thrilled about.

“I was sitting in the living room, trying to play this tuba, when my dad came in and said, ‘What in the hell are you doing with that thing?’ I said, ‘This is what I’m gonna do.’ He said, ‘You’re never gonna make a penny in this world playing a tuba,’ and then he took me right back to school. I was totally heartbroken. But he said, ‘Look, you’re gonna play drums. You can do really well with them.’ I still wanted the tuba, but the next thing I knew I was trying out the drums, and it was the best thing that ever happened to me.” – Vinnie Paul in “Pantera’s Vinnie Paul” by Teri Saccone, Modern Drummer Magazine, August, 1994.

Vinnie Paul’s affinity with drums wasn’t immediate since he didn’t actually know what to do with them. However, that didn’t last long. After two days he was already feeling it as a much cooler instrument to play than the tuba. For the following two years he focused on snare drumming: drum rudiments and hand technique–something he really enjoyed.

After gathering enough money he was able to secure his first drum set. Curiously, right at the same time Vinnie Paul began playing on a kit, so did his younger brother “Dimebag” Darrell. As time went by Vinnie Paul showcased a great predisposition toward playing drum. He was developing his skills way faster than Dimebag Darrell, so he began hogging the drum set all for himself.

Obviously, Dimebag Darrell didn’t get particularly excited with the gradual decrease of time he was spending behind a drum set. Dimebag Darrell got so mad about it that he ended up getting a guitar from his father. So basically, Vinnie Paul was the main reason Dimebag Darrell ended up playing guitar.

Being exposed to music from an early age was of extreme importance for Vinnie Paul and Dimebag Darrell’s musical development. They watched the best local musicians play all the time and had the privilege to sit in their father’s studio to watch various bands record and perform. It was not only a great way to learn but to get inspired as well; it made them want to play even more.

“So even though my dad always listened to country, me and my brother, the minute we heard Kiss Alive!, we knew that metal was what we wanted to do, and proceeded from there.” – Vinnie Paul in “Vinnie Paul Preview”, Sick DrummerMagazine Website, August, 2009.

After getting a guitar, Dimebag Darrell used to put Ace Frehley (KISS’s guitarist) makeup on and stand in front of a mirror, posing with the guitar. As most older brothers do, Vinnie Paul ended up making fun of Dimebag’s behavior in regard to the guitar. This immediately prompted a response from Dimebag Darrell, who spent the next six to seven weeks closed in his room learning to play Deep Purple’s “Smoke On The Water.”

“Then he came in one day and said, “Do you wanna jam?” And I said, “Do you know how to play that thing?” We ended up playing “Smoke On The Water,” which was the first jam we ever did. We probably played that song for two hours straight, over and over. We both got better.” – Vinnie Paul in “Pantera’s Vinnie Paul” by Teri Saccone, Modern Drummer Magazine, August, 1994.

This relationship of theirs would go even deeper when in 1981 Vinnie Paul and Dimebag Darrell started their own heavy-metal band, Pantera’s Metal Magic. The band consisted of Vinnie Paul on drums, Dimebag Darrell (called “Diamond” Darrell at that time) and Teddy Glaze on guitar, Donnie Hart on vocals and Tommy Bradford on bass. In 1982 they renamed the band as Pantera, in order to shorten its name and settle internal disagreements stemming from it.

Shortly after Pantera’s formation, Donnie Hart, and later Tommy Bradford, left the band. Teddy Glaze became Pantera’s vocalist and Rex Brown (known as “Rexx Rocker” at the time) was chosen as Tommy Bradford’s replacement. Vinnie Paul and Rex Brown met in the high-school jazz band. They weren’t actually that interested in jazz, so they’d usually get early to band rehearsals to jam out 2112 (1976) by Rush. Vinnie Paul was actually kicked out of the jazz band for playing too loud too often.

Vinnie Paul’s experience with jazz didn’t quite transfer to his rock and heavy-metal drumming. However, unlike jazz band, marching band was way more useful for Vinnie Paul to start incorporating different ideas and concepts into his playing, especially drum rudiments.

“Drum corps was my favorite when I was in high school. We had one of the best drum lines around, and we were corps-style, not military-style. Man, I was into it. It was cool. We won all of our competitions—that drum line smoked.” – Vinnie Paul in “Pantera’s Vinnie Paul” by Teri Saccone, Modern Drummer Magazine, August, 1994.

Vinnie Paul recorded nine studio albums and one live album with Pantera. Metal Magic (1983), Projects In The Jungle (1984), I Am The Night (1985) and Power Metal (1988) were produced independently by Vinnie Paul’s father and found little success. Power Metal was the first Pantera album to feature Phil Anselmo on vocals.

After being turned down by many major labels, they were able to secure a record deal by being in the right place at the right time. Stranded in Dallas due to hurricane Hugo, Atco Records representatives called their office to ask if there were any bands in town they should check. Their boss Derek Shulman, who was interested in signing Pantera, told them to check the band out.

“The A&R guy called me and asked if he could come to a rehearsal studio to see us. I said, ‘Dude, tell you what. We’re playing a birthday party tonight.’ This girl had asked us to play a party at this Mexican disco in Fort Worth. We didn’t have a gig that week and we were broke, so the five hundred bucks sounded good. There were eighty people there, people were throwing birthday cake, and we were just jamming, having a blast—and this A&R guy was there. About a week later we were signed.” – Vinnie Paul in “Pantera’s Vinnie Paul” by Teri Saccone, Modern Drummer Magazine, August, 1994.

The following release from Pantera was their breakthrough album. Cowboys From Hell (1990) is considered the first album of the groove-metal genre, selling over a million copies to this day. Their following release was their most successful. Vulgar Display Of Power (1992), one of the most influential metal albums of the 1990s, brought Pantera to the forefront of heavy-metal music, selling over two million copies worldwide.

After establishing themselves as one of the greatest heavy-metal bands of all time, Pantera went on to release four more successful and acclaimed albums: Far Beyond Driven (1994), which debuted at #1 in the Billboard 200, making it the first extreme-metal album to top the chart; The Great Southern Trendkill (1996), Official Live: 101 Proof (1997) and Reinventing The Steel (2000). Pantera would break-up in 2003 due to issues between Phil Anselmo and the Abbott brothers. Vinnie Paul and Dimebag Darrell didn’t lose time and began working on a new project in that same year.

During his 18-month break, Vinnie Paul decided to create his own record label to preserve his brother’s legacy. Two-thousand-six was the year Big Vin Records was born and its first album released: Rebel Meets Rebel. The record was actually a collaboration work between Pantera (minus Phil Anselmo) and country singer David Allan Coe. The tracks were recorded between 1999 and 2003, whenever the musicians had some time off from their other projects. Finishing Rebel Meets Rebel after Dimebag Darrell’s tragic death, was extremely helpful in healing Vinnie Paul’s wounds.

“’Working on this record,’ Vinnie says, ‘I feel like I’m still working with him. It’s been like therapy and really good for me. And this record will add to Dime’s incredible legacy and ensure that he lives on forever. I feel good about that.’” – Vinnie Paul in “Vinnie Paul’s Interview” by Waleed Rashidi, Modern Drummer Magazine’s website, May, 2006.

What Can We Learn From Vinnie Paul?

“When I started out I played single bass, but in ’83 I started buying records by Mötley Crüe and Ozzy Osbourne. Tommy Lee’s double bass playing on “Live Wire” just blew me away, and I knew I couldn’t do that with one bass drum. Then Tommy Aldridge made me flip when I heard him with Pat Travers—he played all of these cool fills with two bass drums. (…) So I really became obsessed about how to do all this, and my dad got me a second bass drum. I started playing and developing it from there.” – Vinnie Paul in “Pantera’s Vinnie Paul” by Teri Saccone, Modern Drummer Magazine, August, 1994.

If you’ve heard Vinnie Paul drumming in any of the projects he’s been involved with, you’ll have an idea of how powerful, precise and fast he is with his double-bass drumming. To get to the level he’s at right now, there are a couple of things you can do. For starters, spend a lot of time working on your weaker-leg speed and stamina–you’re only as fast as your weakest limbs. In order to get to higher speeds you’ll need to develop your weaker leg to a level pretty similar to that of your stronger leg.

“I spent a lot of time working on my stamina back then by starting off slowly. I would play 16th-note grooves 20-30 minutes a day, gradually building up speed every couple of days until the
stamina of my left leg matched that of my right. My pedals are fairly tight, because I use wood beaters and Danmar Super Rock pads on my kick drums, and I want the beaters to rebound quickly.” – Vinnie Paul in “Ask A Pro”, Modern Drummer Magazine, October, 1992.

“Just start out on simple 16th notes, at a tempo you are capable of. Begin with simple alternating strokes, then mix in some paradiddles to keep from getting bored. Maintain the pattern until
your limbs start to burn. Keep it up for a couple of more minutes after that. Do this daily, slowly increasing your speed—and you’re there!” – Vinnie Paul in “Ask A Pro”, Modern Drummer Magazine, May, 1999.

For more tips and exercises for developing your feet, check the free drum lessons “Double-Bass Speed Tips” and “Double Bass Warm-Ups.” Vinnie Paul is also a big fan of playing hand-to-feet combinations. If you’d like to learn some patterns to get you started with it, watch the free drum lesson “Hand-To-Feet Combination Fills.”

Vinnie Paul’s playing is one of the greatest examples of how to groove within heavy-metal. Most drummers believe heavy-metal is just about power, speed and volume. However, and especially with Pantera’s music, it’s as much about power and speed as it is about groove. Vinnie Paul doesn’t compromise groove for flashy drum fills or fast runs on the pedals. Heavy-metal is like any other style of music: making the music feel as good as possible is the most important thing. So whether you’re into heavy-metal or not, you should definitely check Pantera’s music.