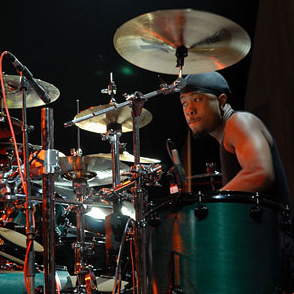 Check out the Tony Royster, Jr. lesson on Drumeo »

Who Is Tony Royster, Jr.?

A child prodigy at first, Tony Royster Jr. was able to refine himself into one of the most talented and gifted drummers in the world. His level of success is a great example of what happens when you combine natural talent and facility with a ton of hard work, woodshedding, and determination.

Born Anthony Royster Jr. on September 9 of 1984, “Tony” Royster Jr. was raised in Hinesville, Georgia, United States. Son of guitar player Anthony Royster and of drummer Gayle Royster, and brother to Calvin Royster, Tony grew up in a family very appreciative of music. Tony Royster Jr. was already showing a natural predisposition towards music in his early years, rocking his body the very instant he listened to a song or watched a music video.

Tony Royster Jr. began playing drums when he was only 3 years old, at one of his father’s band rehearsal. While the band was taking a break, Tony, who was sleeping on his father’s guitar case, woke up and immediately walked over to the drum set. He sat behind the kit and just like that played a drum beat flawlessly. His father couldn’t believe what he was hearing, so he walked over to Tony.

“He then told me to stop and start again, to make sure it wasn’t a fluke. I started playing again and from there, it just happened.” – Tony Royster on an interview for GuitarCenter.com.

His father played with a lot of different people, so he was very knowledgeable of music. He took on himself to teach Tony Royster Jr. how to play drums. He also taught Tony to be as diverse of a drummer as possible. This would ensure he’d be ready to face any type of gig situation, while at the same time giving him the tools needed to have a long career in the music business. Tony’s father also made sure to take him to talent shows and charity events, accompanying him with his guitar. Anthony started noticing that Tony had a special gift when he was 5 years old. Tony was able to sound exactly like players who were way older than him.

In 1993, and with a few phone calls from his father, Tony Royster Jr. was introduced to Dennis Chambers. At the age of 9, Tony got his motivation boosted even further, when he got his first check by winning a talent competition. This was enough to convince him to stay on his course, as he delved further into his drumming without any formal training.

He started getting noticed by some of the industry’s top companies and professionals in 1995, by winning the Guitar Center National Drum-Off! competition in Hollywood, California. All of this attention led him to attend and play at the NAMM Show, and get a sponsorship deal with Pearl Drums which led him to perform at clinics. At the ripe age of 12, Tony Royster Jr. was invited to do the Modern Drummer Festival in 1997, performing alongside some of the world’s top drummers. He played a drum solo that mesmerized an entire audience, earning him a great deal of respect and admiration from his peers.

In 1999, Tony Royster Jr. was featured on the inspirational video Common Ground, alongside some of his biggest drumming influences – Dennis Chambers and Billy Cobham. Despite his success amongst the drumming community, Tony was still able to keep somewhat of a normal life. Besides practicing at least one hour a day on his drum set and go to school, he would still find time to drum on the high school marching band and play various sports.

In 2000 and 2001 he was voted #1 on the “Up and Coming Drummer” category of the Modern Drummer 2000 Readers’ Poll. In 2000, Tony performed at the 42nd Annual Grammy Awards. This performance of his was what actually helped him land his first big gig. In 2001, Tony Royster Jr. was invited to play on the tour for #1 selling Asian artist, Hikaru Utada. Tony graduated from Liberty County High School in 2002, and his career just took of from there.

In just a heart beat, Tony Royster Jr. went from a child prodigy to a full fledged professional musician. The coolest thing about his story is that it’s far from written, this is only the beginning. He has reached the apex of his professional career, as a drummer and a musician, at a very early stage of his life. One can only reckon how much better he will be in 20 years.

Tony has had some high-profile performances. He’s been part of the Nickelodeon house band, lead by Paul Shaffer of the David Letterman Show, and has performed on The Jenny Jones Show, BET Awards, VH1, David Letterman Show, and Jimmy Kimmel Live, among others. Furthermore, after performing on the Modern Drummer Festival, Tony Royster Jr. has performed on other big international events like the Percussive Arts Society International Convention (PASIC), the Montreal Drumfest, the Florida Drum Expo, the Singapore Drumfest, and Drummer Live.

After the release of Common Ground (1999), two more DVDs have been produced featuring Tony’s playing and drumming concepts – Pure Energy (2007) and The Evolution of Tony Royster (2009). These videos are more inspirational than instructional, letting you have a closer look at Tony’s amazing pocket playing and chops. You can also relive Tony’s Modern Drummer Festival performance on the Modern Drummer Festival 1997 DVD.

Throughout his career, Tony has played alongside renowned drummers such as Dennis Chambers, Chester Thompson, Steve Smith, Sheila E. and Billy Cobham, and with great musician’s Branford Marsalis, Jimmy Jam, Terry Lewis, “The Game” and En Vogue. One of Tony’s major breaks came while he was in Poland doing clinics for Drum Workshop (DW). He got a call from his friend and fellow drummer Nisan Stewart, urging him to fill the empty drum throne for hip-hop celebrity Shawn “Jay-Z” Carter. As soon as Tony returned to the United States he immediately began rehearsing with Jay-Z for an impending tour.

Other high points of his career include playing the Glastonbury Festival and President Barack Obama’s inaugural ball with Jay-Z in 2009. He has received the “Louis Armstrong Jazz Award”, a prestigious award that recognizes a musician’s level of musicianship, character, and individual creativity. Furthermore, Tony has received a “Senior Award” for his accomplishments in the world of drumming. In 2006, Tony Royster Jr. teamed up with Hidden Beach Recordings to produce Unwrapped Vol. 6: Give the Drummer Some!, debuting at #1 on the jazz charts.

In what regards personal music endeavors, Tony Royster Jr. plays drums for a rock band called Lazyeyes and for r&b boys band Imajin. He’s also exploring new facets in the world of music, by joining the production team of The Futuristiks. They have produced music for artists of the likes of “50 Cent”, Rick Ross, Cypress Hill, Shyne, “Redman”,” Paypa”, “Sheek Louch”, and D-12, among others. Tony has also designed his signature drumsticks with the help of Vic Firth.

What Can We Learn From Tony Royster Jr.?

For the last few years there has been an increased interest in the drumming of guys like Aaron Spears, Nisan Stewart, Gerald Heyward, Teddy Campbell, Cora Coleman-Dunham, Mavin McQuitty, Thomas Pridgen, and George “Spanky” McCurdy, among many others. They are known as gospel drummers and usually play with some of the most famous artists in the world of pop and r&b music. They are known for having an amazing set of chops on the drum set, and for their wickedly fast and powerful hand to feet combinations around the drums and cymbals. Nonetheless, these drummers are hired by these famous acts mostly because of their ability to groove.

Tony Royster Jr. has the same type of facility on the drum set associated with this type of players, and just like them he’s a hired gun for a great hip-hop act, in his case by Jay-Z. It’s very fun and awesome to play all those wicked and fast drum fills around your drum set. But as a professional drummer the most important thing for you to have is a great pocket playing. All of those chops mean nothing if you can’t hold a steady beat and make your drumming fit nicely with a song.

“That’s the most important thing about playing with rappers and playing hi-hop and stuff like that (…) just keep in the pocket, deep pocket, that’s what they want.” – Tony Royster Jr in an interview for DrumChannel.com.

A professional like Tony Royster Jr. is hired mostly to play the drum parts you hear in the original hip-hop songs, which are played by drum machines most of the times. Hip-hop, just like any other groove based style of music – blues, soul and funk – are all about grooving and playing few fills or even no fills at all. So if you strive to be an accomplished professional musician in the world of groove based music you have to remember to always respect the groove, and what it’s required of you by whoever hires you.

When analyzing Tony Royster’s drumming is very easy to get mesmerized by his technical proficiency when playing fills or solos. His use of hand to feet combinations is a great example of how cool it is to play linear patterns on the drum set. Linear means that no limb is playing a note at the same time. The most common hand to feet combinations involves the usage of bass drum, toms and snare drum. This has become a standard in the world of drumming. Still, from time to time it’s possible to see Tony spicing things up by using the hi-hat and the cymbals instead of tom and snare hits. For an added challenge you could use the hi-hat foot instead of the bass drum for adding a different texture and new creative ideas to your hand to foot combinations.

Tony Royster Jr. sports a set of chops very reminiscent of the great late Buddy Rich, with an impeccable sense of time, control, independence and a killer speed, with a foot technique to die for. Many say Tony is the next Buddy, since, much like Buddy, he was born with a natural predisposition towards drumming and shows an impressive level of skill. Tony is also very fluent in many styles of music such as funk, r&b, Latin, rock, and jazz making him that much of a better drummer.