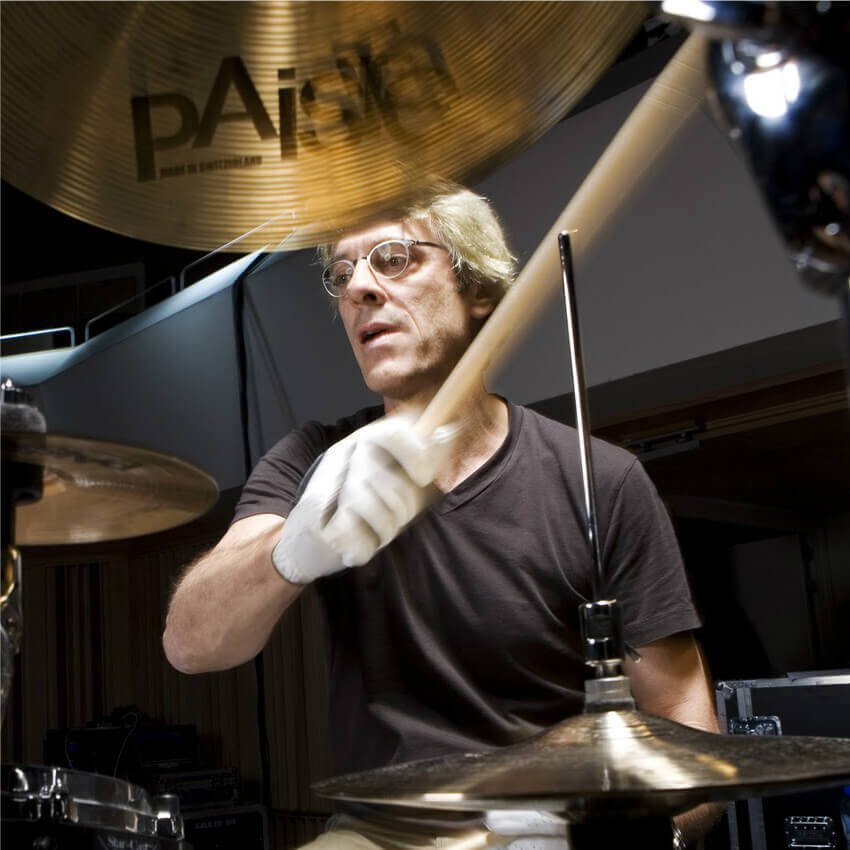 Who Is Stewart Copeland?

Stewart Copeland’s father was in charge of the Middle Eastern operations for the CIA. So during that time the Copelands had to travel a lot. After Egypt, the family went to Syria where Stewart Copeland’s interest in music blossomed. The days Stewart Copeland spent with his mother on archaeological expeditions in the Syrian desert always ended with singing and dancing around a campfire in the evening. This was a custom of Arab villages, and included percussion playing as well. This had huge impact on Stewart Copeland, and would later prove invaluable in the way he approached the drum set.

The drum set entered Stewart Copeland’s life when he began listening to big-band and jazz records from his father’s collection. Miles had been a jazz trumpeter in the 1930s for bandleaders like Erskine Hawkins, Charlie Barnet, Ray Noble, and Glenn Miller’s army air force band from 1942 to 1944. So as expected, he was quite knowledgeable about jazz and big-band music. After Syria, the family moved once again. Their next stop was Beirut, Lebanon, where Stewart Copeland attended the American Community School.

In Beirut, a thirteen years old Stewart Copeland continued attending evening campfires like the ones he enjoyed so much while in Syria. Those campfires were actually a great learning experience for Stewart Copeland, and a place where he began showcasing a natural predisposition for rhythm playing. Curiously, shortly after Ian began playing drum set for a local band, Stewart Copeland followed on his footsteps. This came with no shock since Stewart Copeland was already demonstrating some of the main traits of an aspiring drummer at the time, like banging on anything he could get his hands and feet on. Therefore, his father offered him a drum set. So Stewart Copeland’s first experiences with a drum set were, of course, swing-based.

England opened a new world of opportunities for Stewart Copeland to shine in the world of rock ‘n’ roll music. Stewart Copeland first got into that world as a journalist for a drummer magazine. Later on, Stewart Copeland would become roadie for some local bands, including progressive-rock act Curved Air. In 1974/1975, Stewart Copeland landed his first real job as a professional musician, by joining Curved Air as their full-time drummer. It was also with this band that Stewart Copeland made his recording debut, by playing drums for the albums Midnight Wire (1975) and Airborne (1976). Airborne marked Stewart Copeland’s debut as lyricist and songwriter as well.

While in Newcastle, England to perform with Curved Air, Stewart Copeland decided to attend a show by local jazz-fusion favorites Last Exit, a band journalist Phil Sutcliffe had wanted him to see play. Stewart Copeland was not particularly impressed by the band as a whole, but couldn’t take his eyes from Gordon Sumner, the band’s very charismatic bass player that had “Sting” as his nickname. Phil introduced Sting to Stewart Copeland after the end had ended. Stewart Copeland gave Sting his phone number and encouraged him to contact him if he ever need a place to stay or a band to play with in London.

In 1976, Last Exit moved to London. After only a few gigs, half of the band decided to head back to Newcastle while the other half, from which Sting was a part of, remained in London to search for new musical endeavors. Sting decided to give Stewart Copeland a call. Sting immediately joined The Police and began rehearsing with Stewart Copeland and Henry Padovani in January, 1977. In those early days, Stewart Copeland and his brother Ian wrote most of the songs for the Police. Good examples of that are “Fall Out” and “Nothing Achieving,” the band’s first single and B-side respectively.

In May, ex-Gong bassist Mike Howlett invited Sting, drummer Chris Cutler, and a guitarist Andy Summers to participate in a new project called Stronium 90. Since Chris Cutler was unavailable, Sting took Stewart Copeland with him to take part in the project. In that same month, the four musicians recorded various demo tracks and performed at a Gong reunion concert in Paris. During this whole experience, Sting And Stewart Copeland realized that Andy Summers would be a perfect addition to The Police. In July, and after seeing The Police perform live at The Marquee Bar & Club in London, Andy Summers approached the band and asked them to let him join them. Stewart Copeland, Sting and Henry accepted, and The Police became a quartet. However, this arrangement would last only a couple of months. By August The Police would become a threesome once again.

With the addition of Andy Summers to The Police, Sting realized that the band could be way more than just the average punk act of the time. Sting begun writing new songs and restructuring some of his own material to be included in The Police repertoire. The songs were more complicated to play, which presented a huge obstacle to Henry, due to his limited set of skills on the guitar. Andy Summers was also growing tired of sharing guitar duties with Henry, since he wanted to be the only guitarist in The Police since he had joined. The combination of these two factors ultimately lead to Stewart Copeland asking Henry Padovani to leave The Police. By August of 1977, The Police were a threesome yet again.

With their three-piece line-up finally set, and with a new musical direction in place, Stewart Copeland, Andy Summers, and Sting were ready to make music history. Throughout the following nine years, The Police went from an unknown band to touring the world as one of the greatest rock acts, selling millions of records along the way before disbanding for good in 1986.

Stewart Copeland has recorded 5 studio albums with The Police. The 1983 album Synchronicity is their best selling album to this date, with over 8 million copies sold worldwide. This album was their last, being released almost five years after their first one, Outlandos d’Amour (1978). Their breakthrough album was released in 1979 with the name Reggatta De Blanc. The album gave The Police their first #1 hits thanks to the songs “Message In The Bottle” and “Walking On The Moon”, and their first Grammy Award as well. Their next two albums Zenyattà Mondatta (1980) and Ghost In The Machine (1981) have sold over 2 million and 3 million copies worldwide, respectively.

After his time with The Police, Stewart Copeland worked on a great variety of projects. From video game, TV series and movie soundtracks, to collaboration work with different artists and orchestras, Stewart Copeland has done it all. If you’d like to check Stewart Copeland’s full discography click on this link.

What Can We Learn From Stewart Copeland?

Stewart Copeland’s unique and often unpredictable style of drumming has had a huge influence on generations of drummers since the end of the 1970s. Stewart Copeland’s use of splash cymbals, octobans, high-pitched toms, and tight snare drums have given him a very distinct sound on the drum set. This trademark sound of his wasn’t planed from the get go. Stewart Copeland wanted drums that had a quick response to his strokes and a sound that would cut through the wall of sound made by Sting’s and Andy Summers’s guitars on a live stage. So he began experimenting with smaller sized rack toms that he tuned pretty high.

The octobans were added to Stewart Copeland’s set based on looks more than on how they sounded. They were first launched by Tama drums in 1978. However, Stewart Copeland found that the octobans had a really great sound for the type of music The Police were writing. A good example of their use can be heard in the song “Miss Gradenko” from Syncronicity. Stewart Copeland used octobans to embellish the drum parts, giving them a more tribal/reggae-type feel. Listen to the intro section of that song to see what we mean.

The way Stewart Copeland tunes his drums and some of the different instruments he uses should be a great example of how there really isn’t a “right way” of doing things in drumming and music for that matter. Drum tuning as well as the instruments you use and how you use them are a question of personal preference. Think outside of the box, be creative and have fun. Acting like so will do wonders for your drumming and help you create your own voice and sound on the drum set. Now, Stewart Copeland’s unique sound is not only a result of drum tuning and the type of instruments he uses, but of his musical influences as well.

While growing in the Middle East, Stewart Copeland was exposed to high doses of Arabic music and listened to a lot of Jimmi Hendrix and Cream. The baladi rhythms of the Lebanese hills in conjunction with Mitch Mitchell‘s and Ginger Baker‘s drumming – highly influenced by world and jazz music – were pivotal in making Stewart’s style of drumming so different and exquisite. Reggae music’s influence in Stewart Copeland’s style of playing came later in his drumming career. We’ll now take a look at how Stewart Copeland’s mix of rock and world music was used throughout the various albums on The Police’s catalog.

The pre-chorus for “Roxanne” from Outlandos D’Amour features a mix of the reggae two-drop (bass drum on counts 2 and 4) feel with mambo that works surprisingly well. “I Can’t Stand Losing You” from the same album is highly influenced by reggae. The fill with which the song starts is reggae-based, as well as the snare/crash unison strokes on count 4 during some sections of the song. This song features another very common trait of Stewart Copeland’s playing, leaving the snare drum out of the equation and using the hi-hat, toms and bass drum only during for playing drum beats. The final section of the chorus and the second verse from “Message In A Bottle” are great examples of that as well.

Another reggae-based detail of Stewart Copeland’s playing is what he likes to execute on count 1. Most drummers play count 1 with big accented unison strokes between a crash cymbal and the bass drum, or play a bass drum stroke every time count 1 comes along. Stewart Copeland doesn’t play like that for the majority of his work with The Police. For instance, you can listen to Stewart Copeland play count 1 with accented strokes on the toms in the second verse and the final chorus of “I Can’t Stand Losing You”. He also likes to leave count 1 untouched. The transitions between the first verse and the chorus of “Man In A Suitcase” from Zenyattà Mondatta, and the first chorus and second verse of “Spirits In A Material World” from Ghost in the Machine are prime example of that. The heavy use of the reggae one-drop (bass drum on count 3) and two-drop is also another one of the motives why he doesn’t play count 1 as 95% of the rock drummers out there.