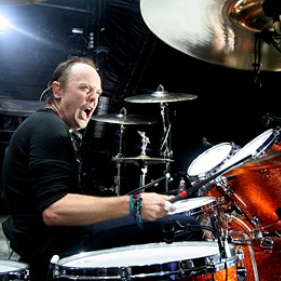 Who Is Lars Ulrich?

Lars Ulrich was born to Torben Ulrich, a Dane professional tennis player and owner of a small jazz club in Copenhagen, Denmark. Lars Ulrich’s godfather was Dexter Gordon, an American jazz tenor saxophonist and Academy Award-nominated actor, who is best known as one of the first and most important musicians to adapt the bebop musical language to the tenor saxophone.

As a young kid, Lars Ulrich’s main focus was on tennis, practicing as much as he could and following his family on the professional tennis circuit. Lars Ulrich interest in music came much later. It began in 1973, more precisely in February of that year. At the time, Torben had gotten a hold of five passes for a Deep Purple concert that was being held in the same stadium as one of the tournaments he was playing at. Torben’s plan was to attend the concert with his friends. His plans backfired when one of them canceled. Having one extra ticket on his hands and no one to use it, Torben decided to take nine year-old Lars Ulrich with him.

Deep Purple’s concert, and the album Fireball (1971), which Lars Ulrich bought the day after the concert, had a huge impact on him. With a newfound taste for hard-rock music, Lars Ulrich and his friends would pretend to be rock-stars by using tennis rackets as imaginary guitars, broomsticks as microphone stands, and cardboard boxes as drums. Seeing Lars Ulrich was always the drummer for those makeshift bands, and the love he was gaining for that particular instrument, his grandmother gave him a drum set in 1976, when he was twelve years old.

Ranked as one of the top-ten players in Denmark at the age of 16 and intending to pursue tennis as a professional career, Lars Ulrich and his family moved to Newport Beach, California, United Sates (U.S.) in the late 1970s, so Lars Ulrich could keep on developing his skills in the best possible conditions. However, tennis began taking a back seat to girls, drumming, rock and heavy-metal music. Tennis was not in the cards for Lars Ulrich but drumming was. Lars Ulrich even decided to take his drumming to a new level by taking drum lessons at a local music store. Lars Ulrich’s interest in music grew greatly as well, especially when he began listening to bands from the new-wave British heavy-metal movement like Iron Maiden, Saxon, Diamond Head, Motörhead, and Def Leppard. Lars Ulrich got so excited about heavy-metal music that he decided to form a heavy-metal band of his own.

Lars Ulrich placed an advertisement in the Los Angeles newspaper The Recycler. The ad read: “Drummer looking for other metal musicians to jam with Tygers of Pan Tang, Diamond Head, and Iron Maiden”. Two guitarists answered his ad, James Hetfield and Hugh Tanner of the band Leather Charm. Lars Ulrich jammed with James Hetfield in May, 1981 before traveling to London to attend a Diamond Head’s concert the following month. After the concert, Lars Ulrich managed to meet the band backstage. The band really liked him. Lars Ulrich was invited by guitarist Brian Tatler to stay with him at his house in Birmingham. Lars Ulrich accepted the invitation since he had no where he could stay at. Lars Ulrich ended accompanying the band as they toured for the following weeks. Upon returning home, and after such an inspirational trip to England, Lars Ulrich asked his tape-trading friend Brian Slagel – founder of Metal Blade Records – if he could record a song for the label’s upcoming compilation album Metal Massacre. Brian accepted, but there was one slight problem, Lars Ulrich didn’t have a band.

On October, 1981 Lars Ulrich contacted James Hetfield and recruited him as singer and rhythm guitarist for his new band. Lars had a band, but he was still missing a name for it. Lars Ulrich asked his friend Ron Quitana to help him choose a name for the band. At the time, Ron was brainstorming names for a heavy-metal fanzine. “Metallica” and “Metal Mania” were the names he had come up with. Lars Ulrich picked Metallica as the name for the band, and thus, the greatest heavy-metal band of all times was born.

Lars Ulrich has recorded 9 studio albums with Metallica. Their 1991 self-titled album (also known as The Black Album) is their best selling album to this date, with over 22 million copies sold worldwide. The Black Album marked a departure from the trash-metal only influenced sound of their previously four releases. Those releases were Kill ‘Em All (1983), Ride The Lightning (1984), Master Of Puppets (1986), and …And Justice For All (1988). Kill ‘Em All was Metallica’s debut album and has sold over 3 million copies worldwide. Ride the Lightning was Metallica’s sophomore effort. It’s considered a classic and one of the greatest heavy-metal albums of all times by fans and critics alike. It has sold over 5 million copies.

Master Of Puppets was Metallica’s major label debut release and the group’s first record to be certified gold. It has since been certified 6 times platinum in the U.S. and 2 times platinum in Canada. It’s considered by many as the best heavy-metal album ever recorded. The album …And Justice For All was Metallica’s breakthrough album, reaching number six on the Billboard 200 and selling over 8 million copies.

Load (1996) and ReLoad (1997) marked yet another shift in Metallica’s musical direction, underlining a more bluesier and less trashier type of heavy-metal. Much like The Black Album, Load and ReLoad debuted at #1 on the Billboard 200 and have sold over 5 million copies worldwide each. Load sold 680,000 units in its first week, making it the biggest opening week for a Metallica release. Metallica’s 2003 studio effort St.Anger is their worst selling studio album to date, selling just over two million copies worldwide. In 2008, the release of Death Magnetic marked the return of Metallica to the trash-metal sound that popularized them in the 1980s. This album has since sold over 2 million copies worldwide.

Lars Ulrich’s work with Metallica has extended to live, cover, and collaboration albums. Their most popular live recordings are Live Shit: Binge & Purge (1992) and S&M (with the San Francisco Symphony, 1999), having sold more than 15 million and 6 million copies respectively. In 1998, Metallica released the cover album Garage Inc., which has sold more than 5 million copies worldwide, and in 2011 the collaboration album with Lou Reed, which is called Lulu. Metallica has been nominated for 59 music awards, 24 of which they have won. The awards they’ve won include: 2 American Music Awards; 3 Billboard Music Awards; 9 Grammy Awards; 1 Juno Award; 2 MTV Video Music Awards, 5 Kerrang! Awards and 2 Rock on Request Awards. Lars Ulrich has also won various Modern Drummer Reader’s Poll Awards in the “Metal” category.

Lars Ulrich is a long time Tama Drums endorser. Lars Ulrich is one of the few Tama endorsees to have had a full signature drum kit. Tama also produces the Lars Ulrich Signature Snare Drum, a 14×6.5” diamond plated drum with that packs a powerful and obnoxious sound. Easton Ahead, a company Lars Ulrich has been endorsing since 1994, produces his signature polyurethane drumsticks.

What Can We Learn From Lars Ulrich?

Lars Ulrich is one of the most influential drummers this planet has ever seen. With the popularity of Metallica and the number of records sold throughout the years, Lars Ulrich’s drumming has reached millions of households. Lars Ulrich has motivated different generations of drummers to pick up a pair of drumsticks and to use his drumming as a blueprint for their’s. Lars Ulrich is undoubtedly one of the most influential drummers of heavy-metal music. It’s essential to study his drumming since it has set the standards for heavy-metal drumming.

The instrumental section in the middle of the song “One” from …And Justice For All has a very cool 16th note triplet double bass drum pattern played in 3/4 odd-time signature that moves seemingly to 4/4. Once in 4/4, Lars Ulrich plays the same 16th note triplet pattern in unison with the guitars. This is one of the most epic moments of the song. It’s a great showing of Lars Ulrich double bass chops, and of his ability to mix different time signatures in a creative way – we talk more about this below.

Lars Ulrich is also prone to performing three-note double bass 16th note triplets just before unison strokes between the snare and a cymbal, and some tom-tom patterns. The song “Leper Messiah” from Master Of Puppets has some very cool examples of that. If you’re looking for fast double bass drumming, listen to the songs “St.Anger” from the album St.Anger, and “Dyers Eve” and “Blackened” from …And Justice For All.

Odd-time signatures are another one of Lars Ulrich’s specialties. The coolest thing about Lars Ulrich is that he transitions between them smoothly so it seems like they aren’t even there. If you want a great example of this ability of his, you’ve got to listen to “Blackened” from …And Justice For All. The song starts in 5/4 odd-time signature but quickly moves to 4/4, 7/4 and 6/4 odd-time signatures during the intro section. The verses are played almost entirely in 6/4. They only change in the last few bars by going from 6/4 to 7/4 and then into a one-bar drum fill in 2/4, before going into a 4/4 chorus.

In the same line of Lars Ulrich’s ability to move between different odd-time signatures is his love for twisting the listener’s brain by turning the beat around. He does so by moving the backbeat from counts 2 and 4 to counts 1 and 3. This is a great way of mixing things up by giving the apparent feel of a time-signature change. This is quite noticeable in the instrumental section of the song “The Frayed Ends Of Sanity” from …And Justice For All. In the 8th bar of the instrumental portion, Lars Ulrich plays three unison strokes between the snare drum and the crash cymbals. This series of unison strokes starts on count 4 and ends on count 1 of the following bar. He does so to displace the backbeat to counts 1 and 3 for the following 15 bars. After this, Lars Ulrich plays a 2/4 bar that brings the backbeat back to counts 2 and 4. Very ingenious and a quite interesting concept to study and incorporate into your playing, no matter the style of music you play.

We couldn’t end a section on Lars Ulrich’s playing without speaking about one of his most known tricks, cymbal choking. Lars Ulrich’s use of cymbal choking is directly connected to the guitar phrasing in Metallica’s songs. Therefore, Lars Ulrich uses cymbal choking as a way to play certain guitar accents in unison with James Hetfield and Kirk Hammett. This is a quite simple technique to use, but one that really enriches Metallica’s music and that you can use to enrich yours.