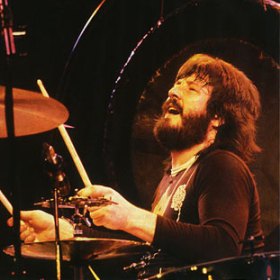 Who Is John Bonham?

John Henry Bonham – also known as “Bonzo” – was born in the non-metropolitan county of Worcestershire, England to Joan and Jack Bonham. John Bonham was the first of three musically inclined children to come out of Joan and Jack’s union. His two siblings were Mick Bonham, a disc jockey (DJ), author and photographer born in 1951, and Deborah Bonham, a singer-songwriter born in 1962.

John Bonham’s interest in percussion began at a very early stage of his life. With five years old, he was already imitating his idols Gene Krupa and Buddy Rich by playing on drum sets he made out of containers and coffee tins. Seeing this growing passion of his, Joan gave John Bonham his first snare drum when he was ten years old. It didn’t take long for him to get his hands on a proper drum set. So around 1962, a fifteen years old John Bonham was given a Premier drum set by his father. John Bonham learned how to play drums all by himself. He never took any formal drum lessons, but didn’t shine away from learning anything he could from other Redditch drummers.

John Bonham attended Lodge Farm Secondary Modern School in Redditch. Between 1962 and 1963, John Bonham played with the Blue Star Trio and with Gerry Levene & The Avengers. After leaving school in 1964, his father, who worked as a building contractor in Redditch, gave John Bonham a job as an apprentice carpenter. John Bonham still found time to drum for local bands. In that same year, John Bonham joined his first semi-professional band, Terry Webb and The Spiders. He also played in bands such as The Nicky James Movement and The Senators.

In 1966, and after taking on drumming as a full-time job, John Bonham joined the band A Way of Life. This endeavor didn’t last long, and John quickly found himself searching for a new band – although he would return to A Way of Life in the following year. So not long after, John Bonham joined the blues band Crawling King Snakes. This proved to be one of the most important moves in his drumming career, since the Crawling King Snakes’s lead singer was non other than Robert Plant. In that same year, John Bonham embarked in a musical project created by Robert Plant and named Band of Joy. Although the band recorded demos only, they were invited as an opening act for American singer Tim Rose’s 1968 British tour. When Tim Rose returned for another tour months later, he formally invited John Bonham to be the drummer for his band. John Bonham quit Band of Joy and joined Tim Rose, which gave him a regular and steady income.

In the meantime, at the Luton College of Technology in Bedfordshire, England, The Yardbirds – a London-based rock band – played their last gig in British soil. They still had to perform a tour throughout Sweden and Denmark. So the remaining members of the band, guitarist Jimmy Page and bassist Chris Dreja began putting together a new line-up. Jimmy Page’s first choice for lead singer was Terry Reid. Reid declined the offer but suggested Robert Plant as a great option for the spot. Robert eventually accepted the offer and recommended John Bonham for the vacated spot of drummer. Seeing John Bonham drum for Tim Rose was enough to convince Jimmy Page that John was the best option for his new band.

John Bonham was reluctant to join the band at first. He had a steady income from playing with Tim Rose and at the same time was getting very lucrative offers from Joe Cocker and Chris Farlowe. John Bonham ended up accepting Pages’s offer based on the simple fact that he enjoyed The Yardbird’s music better than he did Cocker’s or Farlowe’s. Soon after, Chris Dreja quit from the project. Session player John Paul Jones contacted Jimmy Page about the vacant position. Page and Jones knew each other from some session work they had done together in the past, so he accepted Jones as the new bassist for The New Yardbirds.

After completing the tour, the band began recording their first album. They emerged from the studio with a full-length album, a new name, and arguably as one of the most powerful rock bands the world has seen. This was how the legendary band Led Zeppelin was born.

On the 25th of September of 1980, this legendary band came to a screeching halt. Led Zeppelin was getting prepared for an upcoming United States (U.S.) tour at the time. John Bonham drank heavily after and before he arrived at the rehearsals on the 24th of September. Late in the evening, Led Zeppelin retired to Jimmy Page’s house. After midnight, John Bonham fell asleep and was taken to bed and placed on his side. Later in the afternoon, Benji LeFevre (Led Zeppelin’s tour manager) and John Paul Jones found John Bonham dead in his bed, due to asphyxiation caused by inhaling his own vomiting. John Bonham was 32 years old at the time of his untimely death.

After this tragic incident, Led Zeppelin disbanded. A press statement was issued on the 4th day of December of 1980, where they disclosed their decision:

“We wish it to be known that the loss of our dear friend and the deep respect we have for his family, together with the sense of undivided harmony felt by ourselves and our manager, have led us to decide that we could not continue as we were.” – Led Zeppelin

Houses of the Holy (1973), Led Zeppelin’s fifth studio effort has received an 11 times multi-platinum certification in the U.S. and topped the charts in at least seven countries. The double album Physical Graffiti (1975) has received a sixteen times multi-platinum certification, while Presence (1976) has sold just over three million copies in the United States. Led Zeppelin’s eighth studio album, In Through the Out Door (1979) was another very successful album, selling more than seven million copies worldwide. In 1982, Led Zeppelin released the album Coda, a collection of outtakes taken from various sessions and live performances the band had over the years. It has sold over one million copies worldwide. Besides their numerous studio, live and compilation albums, Led Zeppelin released a concert film in 1976 called The Song Remains the Same.

Besides his numerous recordings with Led Zeppelin, John Bonham can be heard playing for other artists’ albums as well. With one of his first bands, The Senators, John Bonham released the single “She’s a Mod” in 1964. In 1969, John Bonham recorded drums for The Family Dogg’s A Way of Life. In 1970, John Bonham was featured on Screaming Lord Sutch’s album Lord Sutch and Heavy Friends. John Bonham also took part in the recording session for Lulu’s 1971 song “Everybody Clap”. In 1979, John Bonham drummed for Roy Wood’s studio effort On the Road Again, and on Wings’s Back to the Egg tracks “Rochestra Theme” and “So Glad to See You Here”. John Bonham made a special appearance in the 1974 movie Son of Dracula as well.

With the globalization of drum set playing; the advancement of the craft; increase in the number of companies and interest around this beautiful instrument, numerous magazines and websites created awards with the objective of distinguishing and remembering the men and women who have made this craft what it is today. John Bonham’s immortal legacy has earned him a lot of posthumous awards during the last decades. In 2005, Classic Rock magazine’s voted John Bonham as the greatest rock drummer of all time. Stylus magazine in 2007, the online music magazine Gigwise.com in 2008, and a Rolling Stone magazine reader’s poll in 2011 did the same. The prestigious Modern Drummer magazine inducted John Bonham into its hall of fame in 1981, and a Rhythm magazine’s reader’s poll voted him as the greatest drummer of all time in 2009.

What Can We Learn From John Bonham?

John Bonham is esteemed for his speed, power, fast right foot, distinctive drum sound, a fantastic sense of groove, a solid feel, and his innovative and polished use of triplet-based hand-to-feet combinations. John Bonham’s contributions to rock music were revolutionary, and are still a source of inspiration for many drummers.

John Bonham’s hand-to-feet patterns are staples in the world of drumming, and have become part of the essential vocabulary of any serious rock drummer. “Stairway To Heaven” from Led Zeppelin IV and “Dazed and Confused” from Led Zeppelin I features two great examples of John Bonham’s ability to play great sounding hand-to-feet combinations. In “Stairway to Heaven”, the hand-to-feet combination we’re talking about can be heard at minute 6:21. The first three counts feature the hybrid drum rudiment herta played as 32nd and 16th notes and broken up between the hands and foot. Count 4 from this drum fills is a 16th note triplet hand-to-feet combinations as well. The hand-to-feet combination from “Dazed and Confused” can be heard on minute 4:57. This 8th note triplet pattern is one of the most popular in the world of drumming. John Bonham leads it with his left hand, which makes him cross his arms over on count 3. These are two great rock drum fills that we highly encourage you to learn how to play.

John Bonham’s right foot was another one of his fantastic features. His bass drum foot was so fast, that John Bonham could play very fast 16th note and 16th note triplet patterns without the aid of a double pedal or two bass drums. The verse section of the song “Good Times Bad Times” from Led Zeppelin I has some very good examples of just that. In it, John Bonham played a combination of fast bursts of 16th notes, and extremely fast 16th note triplet double strokes with the use of the slide technique.

If you’re interested in improving your ability to play fast and consecutive 16th notes with only one foot, check the free drum lessons “Bass Drum Independence Etude” and “Intermediate Single Pedal Speed“. You’ll also find free drum lessons on this website that will teach you techniques for playing fast double strokes with only one foot. You can learn how to play the slide technique or how to play the heel-toe technique.

It’s impossible to talk about John Bonham’s style and not mention another great and impressive ability of his, his groove. John Bonham was a great fan of soul, funk and blues. He had a very eclectic taste, one that serves his playing quite well. To get a better understanding of this, you have to listen to “Fool In The Rain” from In Through the Out Door. John Bonham’s half-time shuffle groove and the samba-based bridge section are testaments to what listening to different styles of music can do to your playing, especially when you’re working on original material of your own.