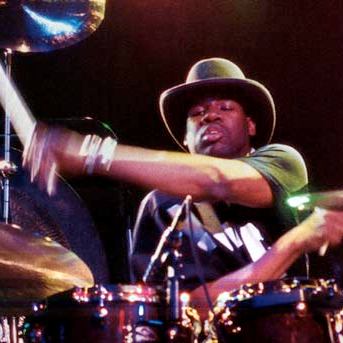 Check out the John Blackwell lesson on Drumeo »

Who Is John Blackwell?

A lot of businesses are family driven. They’re passed on from fathers to sons for generations on end. Like a family business, drumming was passed on to John Blackwell by his father. The ways of groove-making and the music business were taught to him earlier on in his life. The investment earned him a slew of dividends in the form of gigs with artists like Prince and Justin Timberlake.

Even before being born, John Kenneth Blackwell, Junior’s (John Blackwell) future was already in the making. His father, John Kenneth Blackwell, Sr., loved music and playing drums. He learned to play using cardboard boxes, seeing money was tight when he was young. Eventually, he was able to buy a drum set and have his own band, The Mellowtones. The “Pocket Man”, as he was known, was able to make a name for himself in South Carolina, sitting in with musicians like The Flames of Manning, The Drifters, King Curtis, Joe Tex, Joe Simon, J.J. Jackson, Mary Wells, and Cornelius Crawford & the Entertainers. This passion of his rubbed off on his son, John Blackwell, shortly after his birth.

“Every morning, my dad would wake up and, religiously, the first thing he would do was go to the drum set. And he would wake me up and say, ‘Follow me into the living room,’ which was a living room until my dad and I look it over and made it a music room, I just sat down in front of the drums and watched him play. Then when he was done, he’d give me the sticks, leave the room, and let me do my thing.” – John Blackwell in “Diamonds In The Ruff” by Matt Peiken, Modern Drummer Magazine, August, 1998.

Love for funk music was immediate, thanks to his father’s influence and record collection. In fact, the first drum beat John Blackwell learned to play was the one from The Commodores’ “Brick House.” Going to concerts with his dad was another fundamental aspect of John Blackwell’s training in music and drumming. Cameo’s live performances in 1980 and 1982 were the first concerts Jonathan Blackwell ever attended.

“Those were the first concerts I ever went to. I would watch the drummers up on the riser, playing to thousands of people, and I’d be like, Wow! This is what I want to do. After the show my dad would take me backstage to meet some of the drummers.” – John Blackwell in “John Blackwell” by Billy Amendola, Modern Drummer Magazine, October, 2001.

For the following years John Blackwell worked on becoming the best musician he could be, by playing along to his father’s rhythm and blues (R&B) record collection. John Blackwell’s efforts were further enhanced in 1987, when his father bought him his first set of drums, a five-piece Tama Imperialstar, as a Christmas gift. The following year, John Blackwell was admitted to W. C. Keenan high-school, Columbia, South Carolina. There, he sharpened his abilities by playing in the marching band and the jazz band.

By the time he was 15 years old, John Blackwell was playing for a high-school marching band, a high-school jazz band (directed by Willie Niles), and in clubs on the weekends with a local band called Robert Newton & Lotus Feet. Robert Newton was an experienced musician who actually taught on John Blackwell’s school during the week. Another very important man in John Blackwell’s growth was Marcus Williams, a drum teacher who worked on various aspects of his drumming, especially his foot technique.

“This is where I got my stage performance experience. I learned a lot from Robert. I was studying with him five days a week in school and playing with his band on the weekends. That was my gig until I graduated at seventeen.” – John Blackwell in “John Blackwell” by Billy Amendola, Modern Drummer Magazine, October, 2001.

After graduating from high-school in 1991, John Blackwell’s first professional gig was with the Billy Eckstine’s band. However, John Blackwell’s will to step up his drumming was bigger than his will to gig. So in 1992 he enrolled at the famed Berklee College Of Music, Boston, Massachusetts. During his stint there, John Blackwell split his time up between classes and performances, in and out of college. He played weekly gigs at Ryles Cafe in Cambridge, Massachusetts with jazz saxophonist Herman Johnson, and at Wally’s Café, until graduating from Berklee in 1995.

In 1994, John Blackwell audition unsuccessfully for Bee Bee and Cee Cee Winans. Nonetheless, that audition proved to be a very fruitful one after he was done with Berklee. At the audition, John Blackwell met a vocalist named Freddie Boy who, about one year later, praised his drumming to Cameo’s vocalist Larry Blackmon. Cameo was in need of a drummer, so, trusting Freddie Boy’s recommendation, Larry asked him to invite John Blackwell to join the band. Seeing Cameo was one of his favorite bands, John Blackwell accepted the invitation.

After performing with Cameo for three years, John Blackwell left the band and decided to move to Los Angeles (L.A.), California in 1998. The day before his trip to L.A., John Blackwell’s long-time friend John Paris called him up and asked him to replace him as the drummer for R&B singer Patty LaBelle.

“I thought maybe it would only be for a month or two, but then I found out he wanted to bring me in as a full-time replacement. So I had to prove myself to the music director (…) it was hard to tell how the musical director felt about me. I had a good feeling from him, but what really gave me confidence was the way Patti responded to my playing. (…) She was just groovin’ away and then she turns and (…) gives me this big smile. She introduced me to the audience as her new drummer. (…) Then after the show, she came up and put her arm around me and said, ‘I’m keeping you!’” – John Blackwell in “Diamonds In The Ruff” by Matt Peiken, Modern Drummer Magazine, August, 1998.

After working for a while with Patty LaBelle, John Blackwell got the big break most drummers dream of. Impressed by John Blackwell’s performance during one of Patty LaBelle’s shows, while she was opening up for Chaka Khan, two very special attendees asked to go on stage so they could have a closer look at the drummer playing. Those attendees were non-other than Prince and Larry Graham, ex-Sly And The Family Stone bassist. Standing on the side of the stage watching John Blackwell perform, Prince felt he could really make something out of him.

After the gig, Larry Graham and Prince approached John Blackwell to tell him how much they had enjoyed his playing. Larry gave him his card and Prince said they would talk soon. One night, after Patti LaBelle’s show at New York’s Madison Square Garden, Prince approached John Blackwell and asked if he would come to Minneapolis to jam with him and Larry. John Blackwell accepted. He ended up being flied many times to jam with Prince. After finishing his tour with Patti LaBelle and his commitments to Hikaru Utada, Japan’s biggest pop star, John Blackwell officially signed with Prince in 2000 to join his touring band, the New Power Generation.

Playing for Prince exposed John Blackwell to a whole new world of possibilities. He became very well known in the pop-music industry as a very reliable, professional, and groovy drummer. It was with no surprise that back in 2007 John Blackwell landed a huge gig as the drummer for Justin Timberlake’s FutureSex/LoveShow.

What Can We Learn From John Blackwell?

It’s very hard to look at John Blackwell and pinpoint exactly the things he’s awesome at. You see, as a master drummer, he’s very good at a lot of different techniques, styles, and concepts. After thoroughly going over his most important aspects as a drummer we decided to focus this analysis on two: showmanship and groove.

John Blackwell is arguably one of the best at incorporating showmanship techniques into his playing. It all started with the marching band he played for in the ninth grade. His love for martial arts played a huge role in developing new ideas for showmanship as well, seeing he learned to swing nunchucks in taekwondo lessons. However, probably his greatest inspiration came from Fats Gallon, a drummer from Atlanta, Georgia who had a china cymbal behind him to use during drum solos.

At one point, John Blackwell’s showmanship techniques were becoming so detrimental to Cameo’s live shows that Larry Blackmon had to have a talk with him. Larry told him showmanship was great but that he had to learn when to use it. It was becoming visually distracting to the audience. So, instead of enhancing the whole band and serving as a supporting musician, John Blackwell was actually taking away from the band and the music. Showmanship has its time and place but you have to realize it can become overkill.

It’s a good idea to talk with the other band members about it. See how they feel about showmanship and if they would be OK in including it into the band’s performance. You can incorporate it in certain parts of songs to actually enhance them in a live setting. For instance, Prince is a great fan of John Blackwell’s showmanship and has incorporated it into his live performances. This is not a question of right or wrong, it’s a question of why you’re using showmanship techniques. If it’s for showboating exclusively, you shouldn’t be using them at all.

Showmanship techniques can really get in the way of your feel and groove. You can incorporate them successfully into your grooves but you have to practice it a lot. Nonetheless, you should never detract from the music you’re playing in order to add some flash to your performance. You’re playing music and that’s the thing you should focus on the most–it’s actually what you’re hired to do most of the time. Like overplaying, showmanship techniques can make you lose gigs. If you play for the songs, focus on keeping good time and groove, you’ll be on your way to be hired for a lot of gigs, especially high-profile ones.

“It’s a matter of control. Control yourself when you get on these big gigs. It’s very easy to want to showboat. It’s not about that; it’s not about you. You’re the drummer, you’re supposed to keep time. (…) Learn the song, respect the music, and play the song the way it’s supposed to be played. And you’ll get many gigs like that.” – John Blackwell in Hudson Music’s John Blackwell – Master Series, 2008.