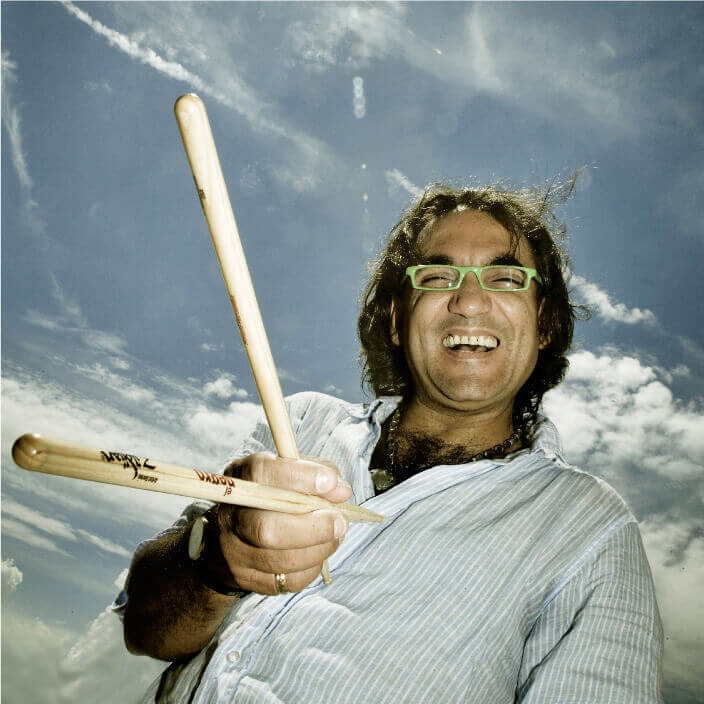 Who Is Horacio Hernandez?

Horacio ‘El Negro’ Hernandez is regarded as one of the most talented drummers in the world. His contribution to music is immense, having recorded and performed with many bands and top class artists. This 1997 Grammy award winner has performed with music greats like McCoy Tyner, Michel Camilo, Carlos Santana, Stevie Winwood and notable Latin American ensembles, the Tropi-Jazz All Stars of the late Tito Puente.

Horacio Hernandez was born in 1963 in Havana Cuba. His love for music can be attributed to the music environment he grew around. His family had a strong background of music. His grandfather was a trumpeter who played in bands like the famous Septeto National. His father and brother were also great music lovers who would spend a lot of time listening to music. Since birth, Hernandez’s nick name has been El Negro or ‘the black’, a name is commonly identified with till today.

When El Negro was around 4 years old, he heard two notable Cuban drummers Enrique Pla of Irakere band and Tony Vadez who played with saxophonist Nicholas Reynoso, perform. The two left a lasting impression in the heart of this young boy. From that day on, El Negro vowed to be like them. At 14, El Negro joined a music school in Havana, but he was so interested in drums that he never attended any other class. He used to attend drum class from 8 in the morning till 8 in the night. After one year, he was not known to other teachers, but he had done a 4 years drums course in one year. The following year, he left school armed with skills to face any drumming challenges and started playing in night clubs in Havana. He later joined the National School of Arts in Havana, but still got time to play with the saxophonist Nicolas Reynoso, to whose band belonged also the pianist Gonzalo Rubalcaba.

But still El Negro wasn’t settled as a drummer. He was still hopping from one band to the other, till he got a chance to work for EGREM-Studios, one of the biggest groups of studios on Cuba as their studio drummer. This was such big chance to spice up his career, but he had to work had for it. He would spend as many as 20 hours moving from one studio to the other. He had to put a makeshift bed in the studio to take a quick nap when it was really necessary.
His hard work paid off and El Negro was invited to join the band led by Rubalcaba, the outstanding Cuban pianist, called Grupo Proyecto. He stayed with the group for ten years touring the world with the band. The band mostly toured the United States and Europe. His experience and expertise made him and Ignacio Berroa, another Cuban drummer do a lot of studio jobs, recording all their songs. They recorded a total of seven albums, which showcased El Negro’s unique ways of playing the drum. He was easily able to play the lead while mixing basic rhythms of Afro-cuban music.

El Negro was very familiar with American Jazz style and this became one of the reasons he could play many forms of music in Cuba. He admired the way jazz was played and received in U.S and so in 1990 he decided to go to the United States by applying for political asylum. His father’s friend Paquito D’Rivera, who had a band in New York encouraged El Negro’s father to send his son to the U.S. But El Negro was denied the visa unless he applied from another country. He therefore went to Italy to apply from there, but couldn’t get through from Rome either.

Later on Paquito D’Rivera called on jazz legend Dizzy Gillespie to help El Negro. El Negro almost got the visa but Dizzy died as the process went on so El Negro was stuck in Italy for two and half year. However, he did not cry over spilt milk and instead chose to keep on playing in Italy, doing gigs around Rome. In 1993, he was allowed to move to New York on condition that he would comply with the travel sanctions imposed on Cuba, so he had to turn down many offers of tours to South America. This however proved to be beneficial since he had a chance to increase his studio work and got a chance to play with jazz greats like Dave Valentin, Paquo Vazquez, Daniel Ponce, Ed Simon and Dizzy Gillespie’s United Nations Orchestra, this time under the leadership of Paquito D’Rivera. Later when travel restrictions were removed, Horacio ‘El Negro’ Hernandez toured freely and did great work with various bands in Cuba and U.S notable among many was work with Michel Camilo and Kip Hanrahan’s “Deep Rumba” project. He also played for the album “Supernatural”of Carlos Santana, which brought him his first Grammy Award.

El Negro is currently the leader of Italuba, his own Latin Jazz ensemble, as composer and drummer. He has also produced several instructional books and videos.