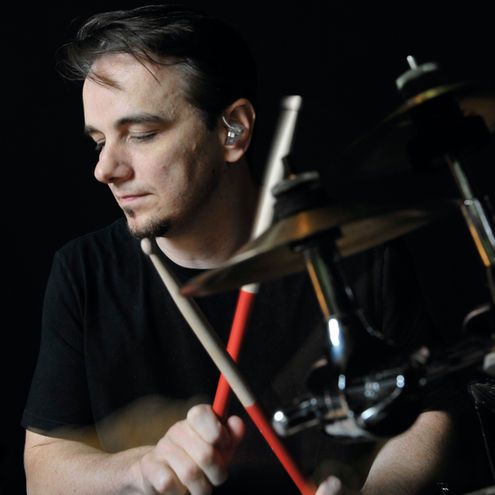 Who Is Gavin Harrison?

A magician is a performer who creates and stages illusions of impossible or supernatural feats through natural means. Like magicians, drummers have the power to illude an entire audience with as much ease but through the clever use of rhythm instead. With his rhythmic batons Gavin Harrison has become one of the most skillful rhythmic illusionists of our time–a Houdini.

Gavin Harrison grew up in Hertfordshire, England. He was turned to jazz music at a very young age by his father Bobby Harrison, a professional jazz trumpet player. Due to his exposure to jazz, big-band music was Gavin Harrison’s first true love. Influenced by his father, Gavin Harrison and his two brothers tried to play the trumpet. However, due to the instrument’s shallow learning curve, Gavin Harrison gave up on it.

Gavin Harrison’s affair with the drum-set came at an early stage and quite naturally. You see, Gavin Harrison is a naturally coordinated individual. He was a good dancer and soccer player as a child. He went to ballet school when he was six years old and was a key player in his school’s soccer team. However successful he may have been in other ventures, he ended up behind a drum set at the age of six.

Playing drum set felt so natural to him that Gavin Harrison didn’t take long to decide he wanted to play professionally. To help him develop his chops, Gavin Harrison’s father built him a wood shed in the backyard, inside which he nailed some mattresses to keep the noise down for the neighbors. Gavin Harrison would run home from school so he could play for as much time as he could, before his neighbors couldn’t take it anymore.

His love for the drum set and determination to become a professional musician were the nails in the coffin of his soccer career. Gavin Harrison eventually quit the school team, since he had to stay after school to practice soccer instead of going home to play drums.

During his first years of drumming, Gavin Harrison spent most of his time playing along to his father’s jazz-record collection. Artists like Chet Baker, Art Farmer, and Miles Davis, and their drummers, were Gavin Harrison’s first teachers. He was so into drumming that he’d even play brushes on magazines.

At the age of eight, Gavin Harrison began accompanying his father to recording sessions held at the British Broadcasting Corporation (BBC). Bobby Harrison worked there at the time and recorded on the room next to the one where the BBC Big Band did their thing. This experience exposed Gavin Harrison to great big-band music and to the drumming of a fantastic drummer named Paul Brodie.

“Paul was incredibly friendly. He must have been fifty then, but he was really hip, into Gadd and Cobham. From age eight to fifteen I’d go and sit next to Paul and be amazed. On his coffee break he’d give me a go on the drums, and he’d teach me to play Gadd licks, like ’50 Ways.’” – Gavin Harrison in “Portraits – Gavin Harrison” by Geoff Nicholls, Modern Drummer Magazine, December, 1997.

After playing drums for five years, Gavin Harrison had his first experience with a drum teacher. He began taking private lessons at the age of 11 with a show-drummer called Joe Hodson. Joe gave Gavin Harrison a very solid understanding of hand technique and music theory. Although Gavin Harrison didn’t enjoy learning to read and write music, those lessons wound up influencing his developments as a musician and later on as a professional drummer.

At the age of 16, Gavin Harrison left Joe Hodson, left school, and began playing professionally. Working within the music industry didn’t detract from his will and commitment to learn more about his instrument. Therefore, at the age of 18, Gavin Harrison decided to take formal drum lessons again. Dave Cutler, a Berklee College of Music graduate who’d study with Gary Chaffee, seemed like a perfect fit.

“He really opened my mind to somethings I’d never even thought existed. I was 18 years old at the time and thought I was pretty damn good. When I got to the first lesson with Dave I quickly realized (in the first 30 seconds) that I sucked. He showed me some very musical co-ordination things (that I couldn’t play at all) and told me that there was no point in me coming every week – and that I should just come back when I could play it. It took me 3 months before I dare show my face at his door again – but I worked extremely hard and imagined that his other students were going back much sooner than me. I asked him how long it took other guys before they came back for the 2nd lesson. He said “you’re the only one who ever came back!!!!” – Gavin Harrison in “Gavin Harrison – Exclusive OnlineDrummer.com Interview” by Martin Osborne, OnlineDrummer.com, May, 2010.

In 1983, a 19-year-old Gavin joined the progressive rock band Renaissance and toured America for the first time. He left the band in 1984 without contributing drums to any of their recordings. In 1986, Gavin Harrison joined Iggy Pop’s band for the “Blah Blah Blah” world tour.

Before working with Tom Robinson and Jakko Jakszyk’s on We’ve Never Had It So Good, Gavin Harrison and Jakko formed the critically acclaimed project Dizrhythmia, along with bassist Danny Thompson and Indian percussionist Pandit Dinesh. They released a single album in 1987: Dizrhythmia.

The 1990s started a long and fruitful association with Dave Stewart and Barbara Gaskin. Gavin Harrison’s first album with them was The Big Idea (1990). He has since taken part in the recording sessions for all their subsequent releases: Spin (1991) and Blue & Green (2009). Around this time, Gavin Harrison joined the British funk band Incognito and recorded drums for their most successful album: Inside Life (1991).

The late 1980s and early 1990s saw the beginnings of Gavin Harrison’s work relationship with numerous Italian musicians. He toured with many of them and recorded albums as well. Alice’s Mezzogiorno Sulle Alpi (1992), Eugenio Finardi’s La Forza Dell’amore (1990) and Infinito (1991), and Fiorella Mannoia’s I Treni A Vapore (1992) are some of the albums he played drums for at that point in time. He has since worked with other big-name Italian artists like Franco Battiato, Claudio Baglioni, Raf, Cavani, and Eros Ramazzotti.

In 1994, Gavin Harrison was invited to join Level 42 for the “Forever Now” tour. This invitation came after Phil Gould, their original drummer, left the band. The following year, Gavin Harrison had the opportunity to work with Mick Karn on The Tooth Mother and on a short European tour. This was a great honor because Gavin Harrison was a long-time fan of Japan, Mick’s former band. Japan had a huge influence on Gavin Harrison’s drumming in his late teens, especially because of Steve Jansen, Japan’s drummer.

In 1997, Gavin Harrison began working with the British soul-diva Lisa Stansfield. He recorded drums for the albums Never gonna give you up (1997), Swing (1999) and 831-Change (2001). He also toured the world with her in 1997 and 2001. In 2000, Gavin Harrison released his first solo record, Sanity and Gravity, and became musical director for the legendary band Artful Dodger.

In 2002, Gavin Harrison joined the progressive-rock band Porcupine Tree after Chris Maitland’s departure. At first, Gavin Harrison was hired by the band to record drums for In Absentia (2002) as a session musician. After the sessions had ended, he was asked to join the band as a full-time member.

Since joining Porcupine Tree, Gavin Harrison has recorded drums for the studio albums In Absentia (2002), Deadwing (2005), Fear Of A Blank Planet (2007), and The Incident (2009). For more information on Porcupine Tree’s discography, click on this link.

In 2007, Gavin Harrison joined King Crimson and began a long term collaboration with singer and multi-instrumentalist 05Ric. They met through myspace when 05Ric sent Gavin Harrison a message. After reading it, Gavin Harrison decided to check 05Ric’s page. He really enjoyed 05Ric’s music, and after listening to all the tracks, he wrote to him. They eventually met after a Porcupine Tree’s show and began discussing the possibility of creating music together.

Throughout the years, Gavin Harrison’s studies led him to develop very interesting ideas on the drum set. However, Gavin Harrison always had a hard time finding a band or project where their use was suitable. So those ideas of his served as the main catalyst behind the music he and 05Ric wound up producing. They have since released three records together: Drop (2007), Circles (2009) and The Man Who Sold Himself (2012).sa

What Can We Learn From Gavin Harrison?

Rhythmic illusions like metric modulation, beat displacement, and polyrhythms have an emotional effect in music that doesn’t rely on technical ability. You don’t need to have crazy chops to use them effectively in your musical setting.

Gavin Harrison’s interest in rhythmic illusions began at the age of thirteen, after listening to “Home To Emily” from Patrick Williams Big Band’s Come On And Shine.

“‘He [Steve Schaeffer] kept going over the barline with his fills,’ Gavin recalls. ‘And he did quite a few displacements, which absolutely fascinated me. I was really impressed by this one track.’” – Gavin Harrison in “Portraits – Gavin Harrison” by Geoff Nicholls, Modern Drummer Magazine, December, 1997.

The many rhythmic possibilities and expressiveness these techniques bring to the table are what drove Gavin Harrison to invest so much of his own time in exploring and owning them. His goal was never to learn and master them so he could make “clever” music or “smart” beats. No. He did so for all their musical possibilities.

Gavin Harrison is not impressed by technical ability. He doesn’t care about drum fills, playing fast and showmanship. Gavin Harrison’s interest is in groove making and serving the music. He loves to listen to grooves that stand out on their own while at the same time making the music they were created for, sound like a million bucks.

Despite being known as a master of all those weird rhythmic illusions, Gavin Harrison’s main focus continues to be music. This is something very important to understand about him because if you’re a fan of his playing, it’s very easy to fall in the trap of approaching these advanced concepts with a “wrong” mindset. You can use them whenever you want to, but like with any other thing you play on the drums, if it detracts from the music, you shouldn’t play it.

Gavin Harrison is very clear about his intention with this kind of material in the very introduction of his first book: Rhythmic Illusions. His goal is to emphasize musicality and emotional effect.

Another very interesting aspect of Gavin Harrison’s drumming is his ability to groove. No matter if he’s playing one of his illusions or simple beats, his sense of time and groove are impeccable. It’s not surprising due to his love for Steve Gadd. This comes to show, once again, how his mind is totally focused on making music feel good even when using illusions. While working through things like metric modulations, beat displacements, and polyrhythms it’s very important you take a similar approach to Gavin’s. Don’t ever sacrifice groove and precision just because these are weird concepts. In fact, working on these concepts accurately and making sure they groove will increase your feel and precision on the drums tenfold.

Reply to My Name Is Not Marc Schlee