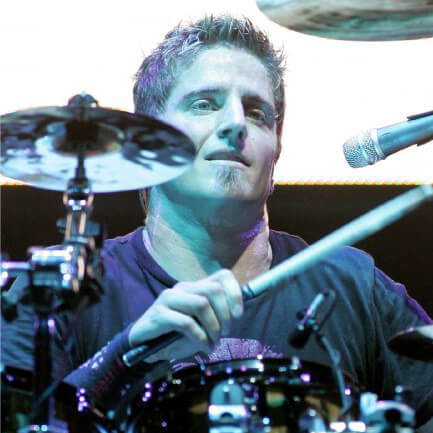 Who Is Daniel Adair?

“The harder you work, the luckier you get” and that’s exactly what you hear when you ask Daniel Adair his thoughts on drumming. Daniel Adair was born on the 19th of February 1975 in Toronto, Canada. He set up his first drum set at the age of 13, which belonged to his father who also was a drummer. What caught Daniel’s attention at the age of 13 was listening to an album by Rush. He devoted long hours to practice by simply listening to other drummers play and slowly taught himself the drums. He idolized Neil Peart, John Bonham and Vinnie Paul Abbot among other drummers. He taught himself the art of drumming until the age of 21, at which he started admiring the jazz drummers like Virgil Donati, Dennis Chambers, Dave Weckl, etc. It was at this time that Daniel started performing with local artists as well as cover bands. He would not pass up any opportunities to play. Daniel didn’t just limit his musical pursuits to drumming. He also learnt to play the bass guitar apart from learning new drumming styles and techniques. Many of his drumming styles are credited to the training from John Fisher, which helped Daniel turn into a disciplined drummer. His intense practice sessions and pure dedication has made Daniel Patrick Adair the drummer that he is today.

During his late teenage years, Daniel couldn’t play much but he got a job in a music store which helped him make one of the greatest networking moves. All thanks to this new job, Daniel started to focus more on his music. This was the time that Daniel started taking drumming lessons from a number of drumming teachers, learning all that there is to drumming. Slowly he started performing in local bars, local pubs, county festivals, etc. Owing to his considerable amount of talent with the drumsticks, he slowly moved on to performing gigs at 5-star hotels. Practice sessions were more like a religion for him where sometimes he even devoted sleepless nights to get the rhythm right. Late night sessions in the recording studio helped Daniel get the experience and the exposure that he had always wanted. Drums and the bass guitar are not the only instruments that he worked on. He also started singing lead as well as back up since he knew that these two qualities will always act in his favour should the situation demand for it.

Then he met a guitarist named David Martone when a band was auditioning for a drummer. Daniel Adair sincerely believed that David Martone was the best guitarist that he ever worked with. Together, Daniel and David created some extremely interesting music experimenting with instrumental fusion music. Playing with David Martone helped Daniel push himself to the limit and ultimately realizing his drumming potential. Sessions with David helped his drumming beats to sound more mature, influencing him to try more gigs. He soon started giving drumming lessons to drumming enthusiasts, which comprised 15 to 20 students at a time. He juggled these duties between other work such as managing a music store, a part of 2-3 bands, etc. He got his big break when Chris Henderson heard him play on a track in the Martone CD. Chris simply loved his style and when he made the other band members hear Daniel Adair, needless to say, they loved him too. This is exactly where Daniel Adair shot to fame because since then he has been the drummer for the American based rock band “3 Doors Down”. He enjoyed his tours with 3 Doors Down and even recorded many albums with them.

In the year 2005, Daniel Adair took the role of the drummer in the Canadian rock band “Nickelback”. Apart from being a key band member of this rock group, Daniel also actively works with other music bands and artists like Thornley, Theory of a Deadman, Bo Bice and is currently working with Chris Daughtry. All thanks to Daniel’s popularity, the Regal Tip Daniel Adair signature model has also been developed and he uses one himself during his gigs. It has been almost 20 years since Daniel Adair held his first drumsticks and will be holding them for years to come.