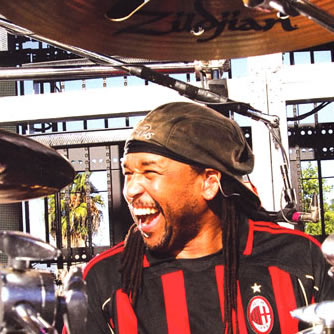 Who Is Carter Beauford?

Drummer for multi-platinum recording band “Dave Matthews Band”, Carter Beauford’s playing shows no resemblance to your regular rock or pop drummer. This musician has an exquisite melodic way of creating drum parts that can be traced back to Tony Williams and Steve Gadd.

Carter Beauford was raised in a family with a great passion for music. His dad played trumpet, his mom piano, his older brother the bass, his younger sister the piano and the flute, while his younger brother took up the saxophone. There was always music surrounding him in his household. Jazz, gospel from artists like Mahalia Jackson and Shirley Caesar, and whoever was on the radio at the time, which where his favorites – “The Beatles”, “Dave Clark Five”, “The Monkeys”, “Sly & The Family Stone”, James Brown, Stevie Wonder and “The Jackson 5”.

At the age of 3, Carter Beauford was taken by his father to watch Buddy Rich perform. Carter is not sure why he wound up at that particular show, but he recalls being totally fascinated with Buddy’s look, posture, and speed, even though he knew nothing about music and instruments. That’s when he decided to take up the drums. He wanted to emulate Buddy, he wanted to be just like him. Once he got home from the show, Carter made way to the basement, where a set of drums from one of the bands with which his dad was playing at the time was waiting for him. His dad saw something there, and since Christmas was around the corner he gave Carter a “Roy Rogers” drum kit with paper drum heads and tin shells. Carter promptly destroyed the drum kit, but the passion was there to stay and to be fueled further more.

A self-taught drummer when starting out, Carter Beauford would study indirectly through his father, from listening to him play with his band, and by listening and watching his favorite artists and drummers at the time – Buddy Rich, Gene Krupa, Tony Williams, Cozy Cole, Papa Joe Jones, “Sly & The Family Stone”, James Brown, Stevie Wonder and “The Jackson 5”. With only 9 years of age Carter Beauford played his first gig. He sat in with a jazz-fusion band led by local celebrity “Big Nick” Nicholas, an associate of John Coltrane. The band members were friends of his dad and invited Carter to one of their shows to play jazz standards, Miles Davis, and Herbie Hancock tunes. He was such a hit that he got paid for the performance and started playing regularly with them from then on.

As a student, Carter Beauford attended the “Shenandoah Conservatory” in Winchester, Virginia, where he had a close friendship with Billy Drummond, a New York jazz drummer. At the time music was just a hobby for Carter. He attended college where he majored in occupational therapy. His inability to read music hold him back on his musical pursuits, so he decided to teach on elementary and high schools in Albemarle County, Virginia, and in Winston-Salem, North Carolina. The call of music was too strong though, so Carter eventually quit to become a full time musician.

After returning to Charlottesville, Carter Beauford played with a few disco and country bands before joining a jazz-fusion band called “Secrets” around 1984. Other members of this band included saxophonist LeRoi Moore, trumpeter John D’earth, vocalist Dawn Thompson, bassist Keith Horn, keyboardist Butch Taylor, and guitarist Tim Reynolds. “Secrets” performed throughout Virginia often at “Miller’s”, a bar in Charlottesville where Dave Matthews worked as a bartender. It was also during this time that Carter landed a gig on pianist Ramsey Lewis’s BET network jazz show – “BET on Jazz”. He remained a member of “Secrets”, while also performing in some other jazz bands, including a few with LeRoi Moore like “Blue Indigo”. After “Secrets” dissolved around 1990, Carter Beauford went to California to tryout for the “Arsenio Hall Show”. He was unable to secure the gig so he moved back to Virginia where he resumed his life in Charlottesville.

Carter Beauford was already playing for almost 30 years when Dave Matthews approached both him and LeRoi Moore with a tape of some guitar work Dave had done for a couple of songs. This was how the “Dave Matthews Band” got started. Carter was able to keep on the “BET on Jazz” show at the same time as he worked with Dave Matthews. As the band began to take off he decided to end his TV career.

Besides playing for the “Dave Matthews Band”, Carter Beauford has also worked with various artists throughout his illustrious career. In 1995 he was the man behind the drumming on “Vertical Horizon’s” first album – “Running On Ice”. In 1999 Carter was featured on 4 albums for 4 different artists. He recorded drums for the track “Love of My Life” with Dave Matthews on vocals, for Carlos Santana’s album “Supernatural”. He was on all the tracks for “Zygote”, the first solo effort of “Blues Traveler’s” John Popper. With “Béla Fleck and the Flecktones” he recorded the track “Zenergy” for Victor Wooten’s “Yin Yang”, and was also featured on “Resolution”, another track from the same album.

1998 saw the release of Carter’s first educational product, “Under the Table and Drumming”. This two-hour DVD encompasses Carter Beauford playing to the music of the “Dave Matthews Band”, and lessons where his unique style is broken down. In 1999 the second Carter Beauford instructional product was released. “Making Music” gives an inside look at the approaches followed by Carter and Victor Wooten for the writing of 2 of the songs on Victor’s solo album “Yin Yang” – “Zenergy” and “Resolution”.

For the 4 years Carter Beauford did the show “BET on Jazz”, he got to play with some top-name performers, including Michel Camilo, Roy Hargrove, and Maceo Parker.

What Can We Learn From Carter Beauford?

Carter Beauford’s playing is very popular amongst the drumming community, especially his fancy hi-hat rhythms and open-hand stance behind the drum set. However, like the “Transformers”, there is literally more to Carter Beauford than meets the eyes.

When he was just starting out, Carter Beauford would set his drum kit as a mirror image of the ones played by the drummers he watched on TV. He wasn’t concerned about leading with his stronger hand, but rather in playing like the guys he watched. So he would set the snare and hi-hat by the right side of the bass drum, while leading with the left hand crossed over the right hand. This led him to the strong development of his weaker side. As time went by, he started noticing that most of the drummers played in a reversed position from his, that is, with the hi-hat and snare on the left side of the bass drum, while leading with the right hand over the left. Since he preferred that look over the one he add with the lefty drum set, he decided to switch over, which lead him to the development of the right side of his body also. As you may imagine, this resulted in Carter achieving one of the holy grails of drumming, ambidexterity. At the time, Carter thought that ambidexterity was something common to every drummer, which as we all know, it’s something that is actually pretty rare.

One of the main issues young drummers have when starting out is the lack of strength and control over their weakest limbs. Pursuing ambidexterity is desirable since it’ll not only give you a lot of freedom while you play, but will also help you in further developing your weaker side, acquiring some of the facilities inherent to the stronger side. Although Carter developed both sides of his body, it still felt more natural to him to play with his left hand leading. This ultimately led him to dabble around with open-handed drumming, since he liked playing on a right handed kit.

Open-handed playing allows Carter Beaufrod’s right hand to be a “solo hand”, playing some shots on toms, cymbals, and auxiliary percussion, while the left hand plays ride patterns and the snare drum. This gave birth to another very cool concept Carter has developed primarily since he started playing with the “Dave Matthews Band” – playing percussionist’s parts on the drum set. You see, throughout his career almost every band he was in had a hand percussionist. When he began creating music with the “Dave Matthews Band”, and since there wasn’t any hand percussionist in the band, he felt the need to add some percussionist patterns with his drum set to better complement certain songs. That resulted in him adding different splash cymbals, wood blocks, cowbells, and timbales to his drum set, so he could better emulate or add some percussionist based patterns and textures.

Now, the thing Carter has been most praised about is his hi-hat work. He uses the hi-hat with a lot of different rhythms and patterns. He states that this approach stems from trying to speak harmoniously with the hi-hat regarding the snare drum and the bass drum, through syncopated rhythms. Some of the ideas he gets for these types of patterns comes from the rhythmic phrases his band mates play on their melodic instruments. Playing straight notes on the hi-hat gets monotonous to him, unless that type of pattern is a perfect fit for a given song. He was inspired to develop syncopated hi-hat patterns because of the work developed by drummers Tony Williams, Buddy Rich, Steve Gadd, and Dennis Chambers. They were far from the stereotype of the drummer, a musician that contents himself with only playing time on the drum set. These gentlemen started using the drum kit in more creative ways, with an exceptional feeling that lend itself to creating syncopated rhythms on the hi-hats. Carter Beauford firmly believes that it’s important to use the drum kit as a melodic instrument also, and not only on a supportive role. This will give a great deal of depth and musicality to the way you support the music.

Carter has a very interesting approach when it comes to creating drum parts for the “Dave Matthews Band”. His creative process usually starts after listening to some ideas developed by Dave on the guitar. Those parts usually remind him of different artists/ bands he listens to. He then creates drum parts influenced by the style of the drummer of that particular artist/ band. He also enjoys including a lot of different things and stylistic features into a one song. Since the members of the band are coming from different musical backgrounds, Carter feeds of off everything and everybody, and incorporates all those different things to create one unique sound. This comes to show how important it is to listen to a lot of different styles of music, different artists and drummers, and to study other styles of drumming as much as possible. This will all make you that much of a better musician, and drummer.

Whether developing his ambidexterity, adding more instruments to his humongous drum set, playing percussionists parts on the drum set, or even messing around with a lot of different rhythms on the hi-hat, Carter’s main focus is music. There is a lot to learn from this man when it comes to creating music with a set of drums.