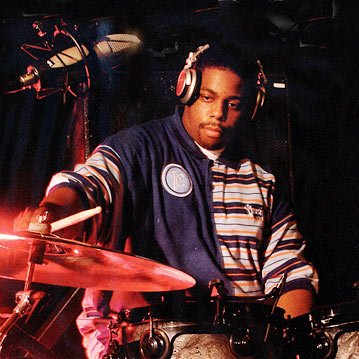 Who Is Aaron Spears?

Aaron Spears’s love for music began in the Church of God and Christ – a pentecostal church in DC he went to with his parents as an infant. Music was a big part of the religious service. Seeing and listening to the choir and to the backing musicians really struck a chord with little Aaron Spears. Being a part of that environment, playing and expressing himself through music became a natural desire of his. Fortunately for us, among all the musicians in the church band, the drummer was the one that captivated Aaron Spears’s attention the most.

With about two, three years of age, Aaron Spears was already wailing his drumsticks in the air at church, while the church drummer preached his groove to the flock. From his parents’s car seat, to the pew; Aaron Spears would just drum everywhere he could. The first time Aaron Spears was able to play without sitting on anyone’s lap was at the age of five. This allowed Aaron Spears to experience his first major drumming moment: playing through an entire song on his own.

Aaron Spears’s mother encouraged him to take lessons as he began playing. For about a week, Aaron Spears worked on basic drum rudiments with a teacher. Aaron Spears didn’t enjoy that experience and ultimately left his teacher. He didn’t get any other formal training until high school, where he joined the jazz and concert bands and learned how to read music.

Aaron Spears’s development as a musician can be mainly credited to the music he listened and ultimately played along to – which came from his parents personal collection. Gospel artists like The Winans, Commission, The Hawkins, and Hezekiah Walker really opened up Aaron Spears’s ears to the world of drumming possibilities he had in fornt of him. For the following years, drummers like Dana Davies (The Winans), Michael Williams (Commission), Joel Smith (The Hawkins), and Gerald Heyward (Hezekiah Walker) fueled Aaron Spears’s drumming, creativity and passion.

As he grew older, Aaron began shifting his attention to some of the best groove and jazz-fusion drummers on the planet. This was around the time he was sixteen years old. It all started when he watched the video of the Zildjian Day in New York (1987). Vinnie Colaiuta and Alex Acuña’s odd-time meters came across so well that Aaron Spears began researching about Vinnie Colaiuta and what he was doing with Sting. This led him to guys like Dennis Chambers, Dave Weckl and Steve Gadd.

Aaron Spears’s first band experiences were with the church band, and with a Go-Go band he was a part off during high school, which was called Butt Sweat. The church band ended up being one of the most important experiences Aaron Spears had as a developing musician. It gave him the opportunity to play in a band setting with a live audience, and to work in an environment very similar to the one he would find years later as a professional drummer. It also helped him secure his first big gig with a local band called the Gideon Band.

After a year and half at Harper College in Los Angeles, Aaron Spears returned to DC. Upon his return, Aaron Spears resumed his position as drummer for the church band and began doing gigs around town. Cornelius Berkeley – one of the founders of the Gideon Band – happened to hear him play at church, and asked Aaron Spears if he was interested in joining his band. A twenty-three years old Aaron Spears accepted the invitation and joined the Gideon Bans as their full-time drummer. Performing with the Gideon Band would take Aaron Spears’s drumming career to a whole new level.

In the summer of 2003, while working a 9-to-5 job at a consulting firm as an information technology (I.T.) guy, Aaron Spears got his first major break. Gerald Heyward – a big inspiration during his early days but a close friend later on – happened to be listening to some tracks by the Gideon Band in the presence of Valdez Brantley – Usher’s musical director. Valdez got interested in Aaron Spears drumming and invited him to audition for Usher’s supporting band, the Funk Rock Orchestra.

Since joining Usher, Aaron Spears has had the opportunity to play around the world and in some of the most popular televised shows in the U.S. like Saturday Night Live (SNL), and the 2005 Grammy Awards where he performed “Caught Up” with Usher and “Sex Machine” With “The Godfather of Soul” James Brown. Aaron Spears was also nominated for a Grammy award in 2004 as a music producer, for his work on the tracks “Superstar” and “Confessions” from Usher’s 2004 effort Confessions.

Aaron Spears has taken a stab at the world of drumming education as well. After his performance at the 2006 Modern Drummer Festival, Aaron Spears was invited to shoot a DVD of his own. The 2-DVD Aarons Spears – Beyond The Chops: Groove, Musicality and Technique wound up seeing the light of day in October of 2009.

Another aspect of Aaron Spears’s career that he’s really proud off is the list of drumming endorsements he has gathered over the years. Aaron Spears’s endorsements include Zildjian, Remo, DW, and Vic Firth – just to name a few. These are companies Aaron Spears really sought after. He has worked with Vic Firth to develop his own signature drumstick, and with Zildjian on the development of the “Inspiration Pack” – a cymbal pack designed expressly for Gospel & Praise and Worship music. The cymbal pack was created hand in hand with Aaron Spears and the Rhythm Alliance. This group of drummers that Aaron is a part off, includes Gorden Campbell, Teddy Campbell, Gerald Heyward, Marvin McQuitty, and Nisan Stewart.

What Can We Learn From Aaron Spears?

Obviously, the first thing we’re going to take a look at is Aarons Spears’s ability to play incredibly fast, precise and original hand-to-feet combinations, which are linear patterns used as drum fills. He was first exposed to this concept through the Dave Weckl‘s DVD The Next Step (1990). Dave Weckl explained this concept in very good detail and at slow tempos. This allowed Aaron Spears to learn what Dave Weckl was playing – stroke for stroke – and gain a deeper understanding of what it was possible to do with it. Two good examples of where Aaron Spears has taken this concept too are the drum fills he plays at the 2006 Modern Drummer Festival and 2005 Grammy awards performances.

Although Aaron Spears’s whole learning experience revolved around learning drum parts from recordings he played along to, he learned important lessons from other musicians with whom he played. The organ player from the church band was always on Aaron Spears’s back whenever his timing was off. He taught Aaron Spears about the importance of staying in the pocket and of playing with intention for the music. This point is a very important one. You see, it’s easy to look at Aaron Spears’s playing, focus on his chops and awesome sounding licks, and forget about what’s really important: the music.

Aaron Spears has made a living out of playing for the music, of focusing on what the song needs. It’s very cool to play thunderous patterns on the drum set. But nine times out of ten you’ll be required to play simpler stuff on the drum set, whether in a professional situation or in a band with your friends. You can use your fancy licks here and there, but don’t use them all the time, or you’ll be fired from the bands you’re playing with pretty quickly.

Another thing Aaron Spears’s career has shown us is the importance of being a diverse player. This has enabled him to take part in the American Idol Tour with great success for instance. Since he had to play music from different styles of music like rock, soul, funk, country, blues, and hip-hop, Aaron Spears had to be very well versed in all of those styles to make the songs sound and feel as authentic as possible. If he wasn’t already a proficient drummer in different styles of music, he wouldn’t have had the opportunity to be part of the American Idol tour in the first place. He didn’t learn these styles on the gig. He learned them on his own practice space and in church, during the years he developed his voice on the drum set. So knowing how to play different styles of music can really set you apart from the majority of drummers out there. It gives you a very broad set of colors that you can use to spice up your music, and also help you take part in very cool gigs.